Raskin’s message to students: Don’t just stand there, change something 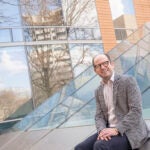 Lawmaker working on Jan. 6 panel gets personal, honoring his father and son, in call to action on health care, voting, and other issues

Speaking at the Kennedy School’s Institute of Politics on Wednesday, U.S. Rep. Jamie Raskin ’83, HLS ’87, Democrat of Maryland, fielded questions about his legal and political education and his work on the select committee investigating the Jan. 6 riot at the U.S. Capitol. He also made several emotional pitches to the students in the audience, urging them to get involved in important issues of the day.

The conversation, which was moderated by Lauren A. Perl ’25 and Tarina K. Ahuja ’24, kicked off with a question about Raskin’s early influences. The third-term lawmaker immediately cited his father’s activism against the Vietnam War. Marcus Raskin, who served briefly in the Kennedy administration, co-authored “A Call to Resist Illegitimate Authority” in 1967, and a year later was indicted for “conspiracy to aid and abet draft evaders” as one of a group of defendants, known as the Boston Five, that included Benjamin Spock and the noted theologian William Sloane Coffin.

“I was 6 years old, and we moved up to Boston for my dad’s trial,” Raskin recalled. “He was facing imprisonment for many years.”

Vietnam “was an undeclared war,” Raskin added. “Congress had never voted for it. We were in violation of the Nuremberg conventions.” His father would be acquitted, and convictions in the case were eventually overturned.

Turning the focus to Raskin’s work with the Jan. 6 panel, the moderators asked about the progress and aims of the investigation.

“In democracy, healing comes from truth,” Raskin answered. Earlier in the day, talking to The Washington Post, Raskin had said that the final report would set forth “crimes that have not yet been alleged.” Speaking at the IOP, he avoided specifics. “The Jan. 6 select committee has made tremendous progress toward defining exactly the character of the events on Jan. 6 and the causes behind them, as well as working on the question of what we need to do to repair and rebuild and renew so that we are fortified against future coups and insurrections and the subversion of American democratic institutions. We’re making progress, but we’re obviously in a very polarized condition in the country.”

Warning against an “authoritarian cult of personality,” he went on to discuss the role of social media in spreading misinformation and the importance of public education in combatting it.

That, for Raskin, brought the discussion back to the importance of young people, and he related the story of Civil Rights activist Bob Moses, who helped register voters in Mississippi beginning in 1960. “He would go from door to door,” he told the largely student audience. “He said, ‘We believe in one person, one vote.’”

A different role model came up when Perl asked Raskin which fictional character or historical figure he most related to. “Thomas Paine,” he said, noting that he and his wife had named their late son Tommy after the author of “Common Sense” (1776) and champion of American independence. Paine “fell in love with the promise of America,” Raskin said. “He said, America’s going to be an asylum to humanity — a place of refuge for people fleeing from political and religious and economic oppression.”

Later in the conversation, he answered a question about immigration by returning to Paine. “We must be an asylum to the world,” he said. “I’ve been a big champion of extending temporary protective status to both Afghan refugees and Ukrainian refugees in general, but especially people, for example, in the Afghan war who were our interpreters and bodyguards.

As the event wound down, Raskin responded to audience questions about health care by recalling his son’s struggle with mental health issues, which ended in his death by suicide on New Year’s Eve 2020, at age 25. Universal health care is, like voting rights, an important fight, he said, imploring students to get involved at both the local and national level.

“My dad always used to say, ‘When everything looks hopeless, you are the hope,’” Raskin concluded. “You guys are the hope.”