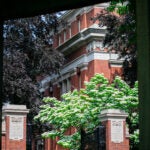 Committed public servant, history-making civic leader, and champion for inclusion, Michelle Wu ’07, J.D. ’12, has been selected by the Harvard College Class of 2022 to address the graduating seniors as part of the annual Class Day celebration on May 25, the day before Harvard’s 371st Commencement.

Wu became the first woman and the first person of color elected to lead the city of Boston when she became mayor in 2021. On the day of her inauguration, she wrote in The Boston Globe that “Boston was founded on a revolutionary promise: that things don’t have to be as they always have been. That we can chart a new path for families now, and for generations to come, grounded in justice and opportunity.”

“We are genuinely thrilled and honored to welcome Mayor Michelle Wu as our Class Day speaker,” said Ruth Jaensubhakij ’22, second marshal and co-chair of the speaker selection committee. “An inspiring leader and fierce defender of equity, inclusion, and opportunity, Mayor Wu has worked tirelessly for a Boston that supports everyone and that will continue to be a model of excellence for the world. As we graduate, we are fortunate to be able to learn from her experiences and her leadership, especially at a time when community engagement is more important than ever.”

Wu first made history in 2013 at the age of 28 when she was elected to the Boston City Council, becoming the first Asian American woman to serve in that role. In 2016, her fellow members unanimously elected her their president, making her the first woman of color to lead the council. She served eight years as a councilor before becoming mayor last year.

“I’m deeply honored to join this year’s graduating seniors for Class Day, returning to campus with fond memories and fresh excitement,” said Wu. “It’s an inspiration to see the activism and accomplishment represented across this class, and I look forward to cheering their leadership for years to come.”

Among her achievements as a councilor, Wu helped reshape the role of city government as a force for urgent change — from passing legislation for paid parental leave, climate resiliency, housing stability, food justice, workers’ rights, and language access to leading on fare-free public transit and mapping out a Boston Green New Deal.

Prior to serving in elected office, she worked in community advocacy, including providing legal advice to low-income small business owners through the Community Enterprise Project, part of the Harvard Law School Transactional Law clinics then based at the Wilmer Hale Legal Services Center in Jamaica Plain. She also worked at the Medical-Legal Partnership at Boston Medical Center on immigration law cases for survivors of domestic violence and was involved in HLS’ Tenant Advocacy Project and Harvard Mediation Program.

Her initiation to working at City Hall began during the Thomas M. Menino administration as a Rappaport Fellow in Law and Public Policy while at HLS. She later served as statewide constituency director in the U.S. Senate campaign of Elizabeth Warren, her former law professor and mentor.

“As a national voice for the importance of civic action at the local level, Mayor Wu understands that our generation not only will be the leaders of the future but that so many of us have stepped up to do our part already,” said Menat Bahnasy ’22, first marshal and co-chair of the speaker selection committee. “She understands this because she has lived it and made history in the process. Her dedication to community and to the ideals of service leadership are inspirational. We are proud to welcome her, a fellow alum, and proud of all she’s done — and will do.

Among her honors, Wu was named one of 10 “outstanding young leaders” by the Greater Boston Chamber of Commerce, and Marie Claire magazine named her part of the “new guard” and one of the “50 Most Influential Women in America.” In 2017, she received the Massachusetts Democratic Party’s Franklin and Eleanor Roosevelt Award, the party’s highest honor. This year, Boston magazine listed Wu at the top of their list of “100 Most Influential People in Boston,” noting that it’s “not just that she’s the new mayor that makes Wu this year’s most influential Bostonian; it’s that she is a fundamentally new type of mayor.”

During her time at Harvard College, where she was an economics concentrator, Wu worked with Phillips Brooks House Association’s Chinatown Citizenship Program, a program she later led. As a soprano with the Harvard-Radcliffe Chorus, she sang alongside vocalists from Harvard and across Boston.

Wu has often spoken about her experience of returning home after graduation to take care of her mother during a mental health crisis and how this shaped her future in government and public service. At the age of 22, she found herself taking care of two younger sisters (becoming guardian for the younger), supporting her mother’s recovery, and running a family business. “All of a sudden, I realized how much government mattered, particularly city government,” she told Harvard Law Today. She brought her family with her when she returned to the area from Chicago in 2010 to attend HLS.

Over the years, Wu has returned to campus several times to share her experience and insights with students. She’s participated in several HLS events, including panel discussions on women in politics at the Women’s Law Association annual conference and at “Leading Cities in a Times of Great Change” at the School’s bicentennial conference. She has also spoken on panels at the Harvard Kennedy School’s Institute of Politics (IOP). In 2020, she spoke to students at an event organized by the Kennedy School’s Asian American Pacific Islander Caucus, the Law School’s Asian Pacific American Law Students Association, and the Harvard-Radcliffe Chinese Students Association.

Wu has also served as an alumni interviewer, and in 2019 was named to the Senior Advisory Committee for the IOP. At the time of her appointment, she noted, “At this very consequential moment in politics and government, we need young people from every background to bring their talents to public service. The IOP has the opportunity to play an important role in inspiring and connecting the next generation to leadership, service, and social justice. I’m honored to join the Senior Advisory Committee with that focus and look forward to doing all I can to support the next generation of leadership for the public good.” The Advisory Committee works closely with the Institute to fulfill its mission to inspire Harvard students to pursue pathways in politics and public service.

The daughter of Taiwanese immigrants, Wu grew up in Chicago. She lives in Roslindale with her husband and two children.

The Harvard College Senior Class Committee has invited a guest speaker for Class Day since 1968. Prior to that, the honor was given to University affiliates, such as deans, faculty, or classmates. The first invited guest was Martin Luther King Jr., who accepted the invitation shortly before his assassination. His widow, Coretta Scott King, delivered the speech in his absence, becoming the first woman to give a Class Day address at Harvard. Since that time, speakers have spanned fields from politics and social activism to journalism, film, comedy, and literature. Recent addresses have been delivered by Nobel laureate, former U.S. vice president, and leading climate change advocate Al Gore ’69, L.L.D. ’94, and pioneering athlete, philanthropist, and activist Jeremy Lin ’10.

In addition to Wu’s address, Class Day includes award presentations and student orations. The event will begin at 2 p.m. May 25 in Tercentenary Theatre and will be streamed live online.