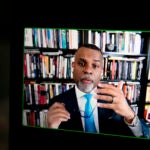 A number of nations have pledged support and willingness to welcome a share of the estimated 4.2 million refugees fleeing the war in Ukraine. A Harvard humanitarian aid expert applauded the efforts but said the goal should be to help these people quickly return home and start to rebuild after hostilities have ended, not resettle in foreign nations.

“The best thing that can happen to them is a cease-fire and some resolution so there’s not active conflict. The next thing after that is repatriation as soon as possible,” said Michael VanRooyen, the J. Stephen Bohan Professor of Emergency Medicine at Harvard Medical School and director of the Harvard Humanitarian Initiative. “There’s nothing like going back home.”

He offered the caveat that any resettlement plans would need to be redrawn if Russia decides to employ nuclear or chemical weapons. Barring that, VanRooyen said during an online event in April sponsored by The Studio of Harvard T.H. Chan School of Public Health that the toughest challenge facing Ukrainians would be rebuilding from the widespread destruction of buildings and infrastructure.

“I would be most afraid of something like Chechnya happening [in Ukraine], just an absolute smashing of every facility, every structure, every civilian institution. That level of blunt warfare is far more damaging and likely compared to say, chemical and nuclear weapons,” said VanRooyen, who is also a professor of global health and population at the Harvard Chan School. “The disruptive nature of war cannot be overstated. War is the great de-developer. It takes a developed nation, like Syria for example, and completely decimates it.”

VanRooyen also discussed the challenges facing relief workers handling the sudden flood of people fleeing Russia’s invasion, saying that their immediate needs are basic. Most are arriving in relatively good health and landing in nations with well-functioning health care systems and robust social safety nets. Their major health needs are mainly medicines and other care for chronic illnesses like diabetes and heart conditions. Beyond that, they need food, money, and access to the internet, so they can keep in touch with family, friends, and extended social networks as well as access bank accounts and other resources.

The situation is likely different for those internally displaced within Ukraine, a number the United Nations High Commissioner for Refugees puts at 2 million. For them, safety and security are top priorities, with emergency care for any wounds suffered in the conflict most urgent, VanRooyen said. The United Nations estimates more than 1,200 civilians have been killed in the fighting so far, with another 1,800 wounded, according to the event’s moderator, Elana Gordon, a reporter with PRX and GBH’s “The World,” which co-sponsored the event.

VanRooyen praised efforts to help Ukrainians and said though many want to do more than just donate funds — collect and ship items like medical supplies, for example — the logistical difficulties of transporting and delivering such aid make sending cash the most effective way to help.

He also urged donors not to forget the larger number of refugees affected by wars, drought, and other crises elsewhere in the world.

“I am not in any way discounting the needs of those refugees from Ukraine and what they’re suffering, but we are facing some of the largest humanitarian emergencies in the horn of Africa, in Yemen, in Tigray, in the Sahel, all around the world, Syria,” VanRooyen said.

The United Nations High Commissioner for Refugees has identified 14 humanitarian emergencies, including Ukraine’s. Some are familiar, such as Syria and its 6.6 million refugees and Afghanistan and its 5.7 million. Others are less so, like the 2.6 million displaced in Africa’s Sahel region and South Sudan’s 2.2 million refugees. The majority are fleeing war, civil unrest, and persecution. VanRooyen said more developed nations need to examine their unequal treatment of refugees from different regions and ethnic backgrounds.

“The reception of refugees in this case [from Ukraine] is very different than the reception of refugees from, say, Syria, and it will — it should — require us to have a hard look at … our openness to receiving refugees,” VanRooyen said. “There is a huge difference, and it’s based on national identity and race and public perception and nationalism. It’s a complicated business.”