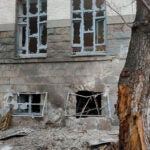 Eddie Glaude says cycles of reprisal will continue till nation faces up to myth of its democracy, one that allowed racism from start

Eddie S. Glaude Jr. says the nation is currently in the angry throes of a white reprisal to the racial reckoning sparked by the police murder of George Floyd, a response that comes at a critical time in efforts to build a genuine multiracial democracy.

“We’re in the midst of what some will call a backlash, but I think that’s too generous,” said Glaude, the James S. McDonnell Distinguished University Professor at Princeton University, during a virtual JFK Jr. Forum on Wednesday evening. “We’re in the midst of another betrayal. Every reckoning in the United States historically has carried with it betrayal. At every moment in which a new America is on the verge of being reborn, the umbilical cord of white supremacy has been wrapped around the baby’s neck, choking the life out of it.”

Glaude is author of “Democracy in Black: How Race Still Enslaves the American Soul,” “In a Shade of Blue: Pragmatism and the Politics of Black America,” and his most recent book, “Begin Again: James Baldwin’s America and Its Urgent Lessons for our Own.” He said that while there have been historic racial achievements over the past two years, the counterreaction has been fierce.

The grass-roots movement around racial justice; the historic election of Kamala Harris, the first African American and first woman vice-president; the Democrats’ victories in Georgia, which secured a majority in the Senate; and the likely confirmation of the first Black woman justice on the U.S. Supreme Court stand as testaments to Black progress. In response have come efforts to curtail voting rights, the Jan. 6 attack on the Capitol, and heated denunciations of critical race theory and the 1619 Project, according to Glaude.

“There is a terror and panic at the heart, at the root of it all,” said Glaude at the event, moderated by Amber Payne, co-editor in chief of the online publication the Emancipator, a collaboration between Boston University and The Boston Globe. “There is a sense in which a certain segment of the country is losing its hold on its understanding of America. ‘Stop the Steal’ wasn’t just simply about the so-called Big Lie. It was also about the browning of America, and it’s evidencing itself in our politics: white grievance, white fear, and white resentment have made themselves known in our politics.”

Glaude points to the aggressive questioning by Republican senators of federal Judge Ketanji Brown Jackson during her confirmation hearings as a reflection of the party’s efforts to disenfranchise voters of color. “It’s the latest example of the ongoing betrayal that we’re experiencing,” he said. “I see it as a component of the insistence on this idea that America must remain a white nation.”

Glaude, who spoke at the talk co-sponsored by the Institutional Antiracism and Accountability Project and the Institute of Politics at Harvard, worries that the next phase could turn more violent, and that the battle for the soul of the nation could be lost if it fails to confront the legacy of slavery, white supremacy, and structural racism. Citing the work of James Baldwin, the famed writer and Civil Rights activist, Glaude said that it’s imperative to confront the myth about the founding of the U.S. as a democracy while allowing slavery.

“There is this idea of America as the shining city on the hill, as this example of democracy achieved, as the redeemer nation,” he said. “And that lie from the very beginning to my mind has distorted and disfigured America so much so that we can’t become the kinds of people that democracies require because we’ve been habituated to live in that fantasy, as it were. Baldwin is insisting, and I agree with him, that if we’re going to grow up as a nation, we have to confront that fantasy. We have to confront that lie.”

A first-year student asked Glaude how the nation could begin the process, and he called for using this moment of transition to try to figure out how to be together differently by organizing, mobilizing, and confronting the dark parts of U.S. history.

“How we organize, how we mobilize, and how we fight around a set of issues can hopefully chart a different path of our being together, and also must involve a different kind of story that we tell about who we are, so that we can imagine being together differently,” Glaude said. “But in order to do this, you have to be willing to look the ugliness of who you are squarely in the face.”