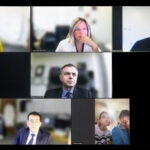 Crespo was a Harvard law student, and he’d been sent to interview Breyer, a meeting that took place in the kitchen of the Breyer’s house while the eminent jurist ate cereal. “I can’t think of anyone who is as free of the airs of the position as Justice Breyer,” Crespo said. “He’s just himself, no matter what rooms he walks into.”

As Breyer prepares to retire from the U.S. Supreme Court after serving as associate justice for 28 years, four of his former clerks gathered Monday afternoon to discuss his legacy and how his departure will shape the court. Organized by the Harvard Law Review, the hybrid meeting on Zoom and before a live audience was moderated by Crespo ’05, J.D. ’08, Morris Wasserstein Public Interest Professor of Law, who clerked for Breyer in the 2009 term.

The other speakers were Caitlin Halligan, former solicitor general for the state of New York and partner at Selendy Gay Elsberg PLLC; Pratik Shah, head of Akin Gump’s Supreme Court and Appellate Practice; and Neal Katyal, a law professor at Georgetown University. The three are considered among the nation’s leading appellate lawyers.

While they discussed Breyer’s impact on the court and the ways it has changed since he joined it in 1994, the speakers also shared anecdotes and memories that underscored their admiration and fondness for him.

Shah, for instance, recalled his introduction to Breyer as pleasant and unexpected, if fraught.

Shah was a first-year law student at the time. And he was very nervous after having been summoned to the office of his boss, U.S. District Court Judge Charles Breyer, after turning in a draft memo he’d written involving due process, even though he hadn’t taken constitutional law yet.

“I worked hard on it, and the next morning, Judge Breyer calls me into the office and says, ‘I haven’t had a chance to review your memo all that closely, but my brother has some questions for you,’” said Shah, who clerked for Breyer in 2003. “And off to the side is sitting Justice Breyer, whom I had never met.”

Shah recalls being struck by the jurist’s outgoing demeanor and his willingness to engage in a serious back-and-forth with a young law student. “It’s just how Justice Breyer operates,” said Shah. “He’s incredibly curious.”

During his tenure on the court, Breyer was known for his quirky “hypotheticals,” in which he would posit whimsical questions that critics often found head-spinning, but his clerks said they represented a genuine effort to try to get to the right answer.

Halligan recalled one of Breyer’s most memorable hypotheticals about a case involving California’s medical marijuana law and the federal government’s role in policing drug use. Breyer wondered about the implications of the law by asking about a farmer who “grows heroin, cocaine, tomatoes that are going to have genomes in them that could, at some point, lead to tomato children that will eventually affect Boston.”

Along with the “tomato children,” Breyer used “marshmallow guns,” and “aspirin fingers” in other hypothetical questions that offered some levity to the proceedings of the court. “His hypotheticals were legendary,” said Halligan.

Breyer had more than 120 clerks during his time on the high court. Halligan, Katyal, and Shah said they have carried lessons from their clerkships with Breyer throughout their legal careers. Among them are respect for an opponent’s views and diversity in hiring. Halligan, who clerked for Breyer in October 1997, spoke about how Breyer’s approach to the law was driven by his concern about the real-world consequences of the court’s decisions and their impact on people. Katyal recalled how Breyer would always refuse to respond a personal attack with another personal attack.

As for Breyer’s legacy on the court, he was often seen as a foil to conservative Justice Antonin Scalia, who believed in an originalist and textualist interpretation of the U.S. Constitution. Breyer carried his vision of the Constitution as a flexible document intended to endure over time and be adapted to the various crises, said Katyal, the justice’s clerk in 1996.

With the likely confirmation of Judge Ketanji Brown Jackson to the court, not much will change, all agreed. Jackson, another former Breyer clerk, shares many of her former mentor’s views on a number of legal issues, so her addition to the court likely will not change its philosophical balance, which currently tilts decidedly to the right.

Although the court is more conservative than when Breyer joined it, his former clerks said they were confident the justice maintains a long-held belief that one of the main roles of the judiciary is to help people with different views live together.

Said Halligan, “I would hazard a guess that one thing that has not changed during the stretch between when we all clerked for Justice Breyer and now is his belief that it’s an institution that can do good and serve the people in a meaningful way.”