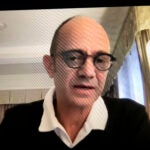 Damon Galgut wanted to challenge his readers, especially the white ones

Julia Riew arrived at a crossroads two years into her College career. She was on the pre-med track, while also exploring her long-held love of musical theater. She realized she was more drawn to the stage but didn’t see it as a practical career path.

“Growing up in Missouri, I had always been the only Asian theater kid, and when I came to College, I found that I was still the only Korean girl doing theater on campus,” said Riew, who is from St. Louis and lives in Lowell House. “I wanted to belong. But I also loved theater. I procrastinated doing my life sciences homework by writing musicals.”

Riew wrote her first Harvard production — the first-year musical “Hitched” — in 2018, and co-wrote a musical about a Chinese American teenager preparing to leave home for college called “The East Side” in her sophomore year. She also co-founded the Asian Student Arts Project (ASAP), a pan-Asian campus organization.

The sold-out run of “The East Side” and the creation of ASAP helped Riew understand the value of telling Asian stories for audiences. But she still had concerns, so she consulted her sophomore summer internship supervisor, Min Jin Lee, an award-winning Korean American novelist and former Catherine A. and Mary C. Gellert Fellow at the Radcliffe Institute for Advanced Study.

“I told her that I was really afraid to be different from the other Korean girls that I had met, and she said, ‘I’m totally different. I’m weird, and I love it,’” Riew recalled. “That really stuck with me. I desperately wanted to fit into my idea of what a Korean person was, but there’s no such thing as one way to be Korean.”

That conversation helped propel Riew toward declaring a joint concentration in music and Theater, Dance & Media. The same summer, she got her first commission from the American Repertory Theater to write its 2019 fall family musical.

Riew created “Thumbelina: A Little Musical,” an experience that opened her eyes to the reality of professional theater work and solidified her desire to pursue it.

“I got to be in the production room, meet with the producers, the designers, publicity people, all of the different aspects of theater that we had done versions of here at School. Seeing it in a professional context was mind-blowing,” she said.

She credited former A.R.T. executive producer Diane Borger and dramaturg Ryan McKittrick for showing her the ins and outs of professional stage work. “Their mentorship and their encouragement is really the thing that made me realize that theater was perhaps something that I could pursue.”

“I want to write the show that the 6-year-old can come see and love, but that the 55-year-old mother and the 80-year-old grandmother can also come see,” said Riew. “They can all enjoy it together.”

“Julia is an extraordinarily gifted composer, writer, and performer. What I’ve also seen is that she is a generous and committed collaborator,” said McKittrick. “That is invaluable in musical theater in particular, and I think all of these qualities taken together will really allow her to thrive as she continues working in the professional theater.”

Since then, Riew hasn’t looked back. She wrote a second A.R.T. show (“Jack and the Beanstalk: A Musical Adventure”) and will premiere a family musical co-written with J. Quinton Johnson, “Alice’s Wonderland,” in June at the Coterie Theater in Kansas City, Missouri. It’s a take on “Alice in Wonderland” in which Alice, a teen coder, gets transported into a video game. (Riew dug up old notes from her introduction to computer science course for a quick refresher while writing the story.)

Broadway actor Raymond J. Lee performs “The Windward Side” from “Shimcheong: A Folktale.”

Her senior thesis is a Disney-inspired musical called “Shimcheong: A Folktale.” She has said that as a girl she wished there was a Korean Disney princess so she decided to make her own. The story is based on a Korean tale called “The Blind Man’s Daughter” about a young woman trying to save her widower father from the sea. Riew’s musical may spring from a traditional yarn, but the themes are all her own.

“For Shimcheong, my main character, her greatest fear is never belonging anywhere. That’s my greatest fear too,” said Riew. She added that writing “Shimcheong” forced her to examine that fear and reconsider her ideas about how to build connections with an audience.

“Even though I am Korean American, I feared that I wasn’t Korean enough to tell this story,” she said. “For the first time, I realized that I really had to question and consider and investigate the way that my cultural identity intersected with my art. But I learned that if I’m staying true to my own experience like I did with this musical, it’s going to be an authentic story.”

Response to her work has been overwhelmingly positive. Riew’s three staged readings on campus in February (featuring a cast and crew of Harvard students) sold out, and videos she released on TikTok detailing her process went viral — her first TikTok has more than a million views, and she recently released a duet with Broadway actor Raymond J. Lee as the “Appa” character from the show. Since releasing her first video in January, she’s received notes and support from all over the world, extensive media coverage, and an agent.

“Writing ‘Shimcheong’ made me realize that not only is musical theater a passion that I have, but it’s also something that I feel like I need to do in order for the next generation to be able to grow up seeing themselves as the hero.”