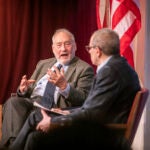 As the war in Ukraine grinds on, hopeful signs of potential progress emerged this week as Russia and Ukraine continued peace talks, and Russia said it would reduce fighting in the nation’s north as a good faith gesture. The statement has drawn considerable skepticism from U.S., European, and Ukrainian officials, as well as from Alexandra Vacroux, executive director of the Davis Center for Russian and Eurasian Studies. The Gazette spoke with her about the week’s developments.

Gazette: It seemed for a while earlier in the week that there might be at an inflection point on the horizon. But we’re hearing about continued fighting in places where Russia had said it was going to wind down. What are your thoughts on the latest developments?

Vacroux:  I think there is gradual progress being made at the negotiating table and negotiating the end to a conflict like this takes a long time. But from what both the Ukrainian and the Russian negotiators said when they came out of the meeting, it looks like they are talking about concrete proposals. So that is good. Afterward, there was the statement from the Russian negotiator [Vladimir] Medinsky saying, “As a goodwill gesture, we’re going to be pulling back from Kyiv and Chernihiv.” But I don’t think many people were ready to accept those words as proof that the Russians were going to do it. What we heard in those two cities was pretty consistent shelling all night long. I couldn’t help but think of before the invasion, when the Russians said they were going to reduce the troops that were massed in Belarus. They put a few guys on a train and said, “Look, we’re cutting back.” The next day they invaded. So it’s actions that matter, not words.

Gazette: You and Davis Center Faculty Director Rawi Abdelal suggested in an op-ed in The Boston Globe that Ukrainian President Zelensky be given the power to lift Western sanctions on Russia. How would that help?

Vacroux: The Russians believe that Zelensky has a relatively weak negotiating position. He has asked for more lethal weapons and a NATO-enforced no-fly zone to strengthen his military position. That would allow him to go into negotiations with an advantage. If the West is not willing to give Zelensky what he says he needs to defeat the Russians, then we need to think about other ways in which we could strengthen his negotiating position. Giving the Ukrainians the power to dial back or lift sanctions would mean that they now have something that the Russians really want. They can then push for greater concessions from the Russians and not come to the table with little to parry with.

Gazette: What do you think of the statement last Friday by the Russian military that is refocusing its efforts on a piece of the eastern portion of Ukraine that borders Russia, because that’s what they wanted all along?

Vacroux: There’s some speculation that the Russians are actually retreating, but they’re calling it a “benevolent withdrawal.” They’re doing it because they were never able to capture Kyiv. The other explanation is that they need a pause to resupply, that they’re trading out some troops and material in Belarus, which is pretty close to Kyiv. Then once that’s done, they can turn around and go back. It’s also understandable if they now think that, at a minimum, they have to get the Donetsk and Luhansk provinces under control. But it also doesn’t make sense that they would say, “Oh, we’re not going to attack from the north anymore,” because that gives the Ukrainians the chance to send more forces to the east.

Gazette: Is Ukraine more amenable to what they’re calling neutrality to achieve a resolution?

Vacroux: It’s a special kind of neutrality. It’s a guaranteed neutrality. What Zelensky’s asking for is the equivalent of NATO’s Article 5 guarantees. That would have major countries, like the U.S. and Russia and Poland and a number of others, ready to assist Ukraine within three days if it were attacked by anybody. They wouldn’t join NATO, which is what Russia wants. If the Russians believe that this option is going to protect their security, then it could be a decent compromise. It’s also quite important that the Russians said that they don’t mind Ukraine joining the EU. It’s really NATO, not Europe per se, that’s the issue.

Gazette: What can we say for sure at this point? Can we at least say that regime change is unlikely? It seemed a certainty at the beginning.

Vacroux: I did an event at the Kennedy Library with Fred Logevall and Tom Nichols, and I asked them, “What is the role of the individual, of a Putin or Zelensky?” because a lot of historians talk about the great man theory versus structural explanations of history. Structural explanations of history tend to be more popular lately, but both of them said, “This is all about Zelensky. Zelensky explains how Ukraine has put up such an amazing fight.” There’s no negotiation that ends with Zelensky stepping down. That’s impossible to imagine now.

Gazette: Another thing we’ve been hearing is the idea of a North-South Korea scenario. Is that the kind of thing Zelensky or the people of Ukraine would accept?

Vacroux: As far as I can tell, that was put out by the Ukrainian Minister of Intelligence Kyrylo Budanov. He said that’s what the Russians are trying to do, and I think it was a rhetorical step to get the West to say, “North and South Korea? We certainly don’t want that.” When we think of North and South Korea, or East and West Germany, they were roughly equal states that were under control. There’s no scenario now where Russia has half of Ukraine and is able to hold onto it. Russia’s ideal scenario at this point is probably they hold Crimea; they hold the separatist parts of Donetsk and Luhansk that they had before; and they get some kind of land bridge through Mariupol to connect the two. Then they can drive to Crimea instead of having to go over the Crimean bridge. The idea is that would be a separate statelet, but if you recall before the war, the Russian Duma approved the independence of Donetsk and Luhansk, while Crimea is part of Russia. So you’ve got different legal statuses here. I don’t know how realistic this scenario was and how much it was just a rhetorical shot.

Gazette: What are some other things to think about now? We’ve been talking about the situation on the ground, but there’s the humanitarian situation, the impact of sanctions.

Vacroux: We can’t lose sight of the humanitarian crisis. Poland does not have the capacity to take the number of refugees it’s getting. They thought they might get 1 million people, and now they are pushing 2.5 million. Moldova, the poorest country in Europe, is also going to be completely overwhelmed. One thing the West can do is double down on humanitarian assistance to those countries so that you don’t have a wave of anti-refugee sentiment. That would make these people suffer more than they already have. Within Ukraine, there’s potentially 6 or 7 million who’ve been forced from their homes, and they’re also going to need help. So, it’s quite important that, in addition to providing arms to fight the Russians, we’re also providing the humanitarian support these people need.

Gazette: What about sanctions?

Vacroux: So far, the sanctions don’t seem to be biting that hard. The Russian Central Bank has stabilized the ruble, mostly by buying what they need to make it appear stronger so people aren’t seeing the exchange rate fall. To some extent, the exchange rate is equivalent to our gasoline prices. It’s a number you see every day, and if it’s falling and you’ve noticed that every day, you think, “God, the situation is becoming worse.” But the shelves in Russia are still relatively full, except for certain goods that people have been panic buying. The U.S. panic buys toilet paper; in Russia, they panic buy sugar, though it doesn’t seem like there’s a shortage since Russia produces its own sugar. As the situation gets worse, unemployment is going to start causing distress. It’s not just the foreign-owned companies that left, but also the Russian manufacturing companies that depend on imported parts. They’re starting to shut down — some car manufacturers, tank manufacturers. But for the moment, there’s a wave of pro-Russia sentiment, the Z logo is all over the place. The media has basically been shut down, but you can still see things on YouTube, where some independent journalists are bravely trying to get information out. What’s amazing is the Russian government is managing to convince the people that it’s the Nazis in Ukraine that are destroying the country. Russians are seeing the destruction in Ukraine; they’re seeing the same pictures in Mariupol that we are. But the message is that Russia is needed there now more than ever.

Gazette: What developments are you looking ahead to?

Vacroux: I’m watching the negotiations. I think there is some progress on that front. We’re also watching to see if the sanctions are tightened. Eddie Fishman at the Atlantic Council has said that the Russia sanctions are a seven or eight out of 10 in terms of severity. Some say Russia is the most sanctioned country because of the number of objects or people that are sanctioned. But sanctioning an individual is not the same as sanctioning a bank. Iran and North Korea are still far more heavily sanctioned — in terms of isolating their economy — so there’s still a ways to go. Presumably, the West is holding out in case Russia uses chemical, biological, or tactical nuclear weapons, which is remains a possibility.

Gazette: Do you have a sense as to what would have to happen for Russia to take that step?