Physician-writers point to power of storytelling 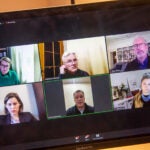 An episode of the TV medical drama “ER” featured a 14-year-old girl with cervical cancer, who learns her illness may be related to human papillomavirus, a sexually transmitted disease. A Kaiser Family Foundation survey done after the 2000 episode found that more than 50 percent of viewers increased their knowledge of the virus after watching the show.

For Neal Baer, one of the series’ writers and producers, that was a testament to the power of storytelling. Baer, who was trained as a pediatrician at Harvard Medical School, had read that thousands of women were dying from cervical cancer, but he knew that he had to tell an individual story to move people and promote change.

“Numbers alone don’t move people,” said Baer in a Thursday online talk hosted by the Office of the Vice Provost for Advances in Learning and the Harvard Alumni Association. “Data and emotion lead to action.”

Baer, who was also writer and producer of “Law & Order: Special Victims Unit” and “Designated Survivor,” now co-directs a master’s program in Media, Medicine, and Health at Harvard Medical School. He spoke about how storytelling can make a difference and influence both social change and public health outcomes.

Baer was joined by Suzanne Koven, who holds the Valerie Winchester Family Endowed Chair in Primary Care Medicine at Massachusetts General Hospital, where she is the inaugural writer in residence. Koven is author of the 2021 memoir “Letter to a Young Physician.”

Baer and Koven spoke about their passion for both medicine and storytelling and the emotional power of stories to move the needle in public health. Citing the work of renowned psychologist Paul Slovic, Baer explained that while most people might care about the suffering of a single person, they may become indifferent to the plight of many, a phenomenon Slovic labeled as “ psychic numbing.”

“Slovic said that the value of a single life diminishes against the backdrop of a larger tragedy,” said Baer. “When it’s one, we can relate, but when it starts to become more than one, we start to turn off.”

To underscore the power of such stories, Koven talked about how moved she was by a recent viral video of a heartbroken young Ukrainian father saying goodbye to his distraught wife and little daughter, bundled up in a pink parka, as he puts them on a bus to safety while he stays behind to fight the invading Russians. That scene, she said, might make people better understand the horror of war in a way that maps and arrows cannot. She similarly pointed to the power of a widely circulated photograph of the body of Alan Kurdi, the drowned Syrian boy who washed up on a Turkish beach. He and his family had been trying to reach Greece, part of an exodus of desperate Syrians who’d taken to overcrowded and creaky boats in an attempt to flee a bloody civil war in their native country.

“I will never forget the white wool hat and the pink ski jacket in the same way that we all remember the image of the 3-year-old boy facing down on a beach,” said Koven.

“We are wired to be responsive to individual stories.”

In Koven’s case, she said writing has allowed her to enrich her life and her effectiveness as a physician. Said she, “Becoming a writer made me a much better doctor, certainly a much happier doctor.”