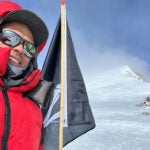 What’s it take to be astronaut?

The war in Ukraine may not appear to be a direct consequence of climate change, but it is fueled by oil and natural gas.

That was the message on Monday, as climate activists and co-founders of Germany’s Fridays for Future Helena Marschall and Luisa Neubauer participated in an online discussion sponsored by the Minda de Gunzburg Center for European Studies at Harvard and Brandeis University’s Center for German and European Studies.

The two activists discussed the movement’s process, from its earliest roots to its reactions to recent developments. That these include not only ongoing ecological damage, as highlighted in this week’s devastating report by the UN Intergovernmental Panel on Climate Change, but also Russia’s ability to invade Ukraine, they explained, only adds to the urgency of the fight for climate justice.

Putting this moment in perspective, Marschall began by talking about how “peace and climate justice have never been so closely linked.” A onetime resident of Cape Cod, the 19-year-old Marschall — currently an economics student at Leuphana University of Lüneburg, Germany — recalled how she had been inspired by a 2018 speech by teenage environmental activist Greta Thunberg and went on to organize some of the first major Fridays for Future strikes in Frankfurt.

Marschall, who now coordinates national campaigns, strategy, and public relations for Fridays for Future, related how the strikes, as the Friday demonstrations are called, have expanded to 700 cities in Germany alone, culminating in a protest of 60,000 in Hamburg in February 2020, the biggest single-day mobilization in Germany since the fall of the Berlin Wall.

This success, Neubauer said, has been due to a conscious effort to “mainstream the climate crisis.” Speaking specifically of Germany but in terms that certainly relate to U.S. politics, she explained the historical background that has made politicians wary of challenging what they incorrectly perceive to be widely held skepticism on environmental issues. In response, said the 25-year-old graduate student at Georg August University of Göttingen, the movement has been very conscious of the need to make the fight for climate justice clearly and visibly relatable.

That campaign is ongoing on multiple fronts. In the German Federal Constitutional Court, the group — with Neubauer as one of the plaintiffs — celebrated a historic win last year, when the court ruled that Germany’s climate protection act was insufficient, essentially deciding that future generations have a constitutional right to a sustainable climate. Such victories, Neubauer said, need to be built on by continuing pressure on elected officials.

In Germany, those actions included phone banking, a technique adopted from American activists and political campaigns; in Germany’s most recent elections it helped elect a progressive government. But, the two said, activism can’t stop there. “The government [must] know that the people who elected them elected them for the climate,” said Neubauer. The group is calling for a massive strike this April. “We are very aware that we want to bring the movement to every corner of the planet, repeatedly and sustainably,” she said. “We must keep the pressure on.”

Complacency is a grave danger, Marschall said. Referring to the UN warning that a possible tipping point might be near, she noted that “when the right measures happen too slowly they might as well be the wrong measures. Timing is everything. The science of the climate crisis is very clear. We have an ever-smaller window in which we can act.

“Technically we have everything we need,” she said. “We have renewables; we have public transportation. People are ready for this transformation. The only problem we have is political will to go against fossil-fuel industries.”

During the question-and-answer period Noah Secondo ’23, co-chair of the Harvard College Environmental Action Committee, asked, “What role do less-populated areas play?” Marschall replied that reaching beyond urban areas is important because it counters the idea of “mainstream” conservative denial of climate change. In Germany’s case, she brought up the “political myth” of a hypothetical “nurse who lives in the countryside” and resists change because she drives a diesel car.

Brandeis sophomore Rebecca Spinner asked what effect the fighting in Ukraine might have on the climate. This led to Neubauer’s description of the Russian invasion as a “fossil-fueled war.” She and Marschall talked about Europe’s dependence on Russia for fossil fuels including oil, natural gas, and coal. Germany has now suspended the Nord Stream 2 pipeline project in protest of Russia’s actions, but the years of fossil-fuel dependence have already shaped the ongoing struggle. And analysts have noted the SWIFT banking system restrictions on Russia appear to have been crafted to allow that nation’s energy sales to Europe to continue for now.

“Europe gives hundreds of millions to Putin, an autocrat, for his oil and his coal. That’s why he has so much power,” said Marschall. “Democracy and the climate crisis are intertwined. That’s how desperately and how dramatically we need to change everything.”

“We need to connect the dots publicly,” said Neubauer. “We need to end the fossil-fuel era not just for the climate but for building stable and sustainable democracies that won’t depend on autocrats.”