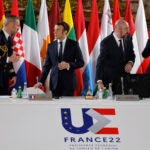 Russia’s punishment is a global event

A protest movement against the invasion of Ukraine is growing in Russia. Demonstrations were held in 60 cities on March 6 and in 37 on Sunday, spurred in part by calls to turn out from imprisoned opposition leader Alexei Navalny. More than 14,900 people have been detained by security forces and police for protesting, according to OVD-Info, a Russian human rights organization.

To quell dissent, Russia has intensified a crackdown on independent Russian news outlets, cut off access to social media platforms like Twitter, Facebook, and Instagram, and declared spreading “false information” about the war a criminal offense punishable by up to 15 years in jail. The moves effectively left state-run media outlets as the only sources permitted to report on the attack and the protests without fear of reprisal.

The Gazette spoke with Erica Chenoweth, Frank Stanton Professor of the First Amendment at Harvard Kennedy School and a Susan S. and Kenneth L. Wallach Professor at Radcliffe Institute for Advanced Study at Harvard University. Chenoweth studies mass protest movements, civil resistance, and political violence, and is the author of “Civil Resistance: What Everyone Needs to Know.” The interview has been edited for clarity and length.

GAZETTE: Are you surprised by what you’ve seen so far of the anti-war protests in Russia?

CHENOWETH: I’m not surprised that there is opposition to the war and that some people feel comfortable expressing that opposition publicly. The persistence of the protests will be important to watch. We’re only two weeks in, so it’s too early to say whether what we’re seeing is the beginning of an emerging anti-war coalition that gets some further capacity to expand mobilization and expand its leverage. Right now, as far as I can tell, the protests are largely symbolic expressions of opposition.

What makes mass movements succeed is not just public expressions, but ways to directly either interfere with the implementation of a policy or to shift the balance of power. It’s impossible to know what’s happening behind the scenes, but most Russia watchers are pretty skeptical that there’s any serious movement in that regard.

If there is some major shift, we won’t know it until it happens, because Russia is an autocratic country, and there have been pretty extreme crackdowns on both independent media and the ability of people to engage in public discourse that is critical of the war, above and beyond arrests. And so, what happens is that when people are opposed, particularly elites who might disrupt the status quo, they don’t say so until it’s clear that everybody’s going to say so at the same time. What’s really needed is some kind of elite shift, and those don’t always happen when there are protests. Protests are necessary but insufficient predictors of when elites decide to shift their loyalty.

GAZETTE: Who makes up this group of elites?

CHENOWETH: Putin’s political allies and certainly economic and business elites, but also security forces, members of the military, and others who would have a bearing on the way that the war proceeds.

GAZETTE: The Russian government has been pretty successful at preventing Russian citizens from getting independent news about the war or the protests. Can protest movements grow when the flow of information gets throttled?

CHENOWETH: It does curtail some of the common ways through which movements not only receive information and communicate their narrative out, but also how they coordinate among themselves. But it doesn’t totally destroy that capacity. It just cuts off, say, social media and certain internet news sites or radio sources of information that were important. And that that can be a setback for a movement.

But the information ecosystem was also tightly controlled during the era of the Soviet Union, and you know, within Soviet-backed regimes in Eastern Europe, behind the Iron Curtain. And basically, opposition groups found ways to communicate with one another to build oppositional literature. In fact, that the creation of oppositional literature was one of the main ways through which these movements grew. Like the newspaper Solidarity in Poland, after which the Solidarity Movement was named, ended up having millions of subscribers. Part of the reason was it was the only other game in town other than the official narrative. So, there will be always a hunger for independent information, at least that’s the assumption, and that demand will be met even if it has to go underground.

GAZETTE: Some in Ukraine and elsewhere are getting around Putin’s clampdown by contacting relatives and friends in Russia to tell them what’s actually going on. Could those types of person-to-person efforts be effective at building a bigger anti-war movement?

CHENOWETH: It’s potentially the most effective manner of exchanging information. The main problem is, of course, creating an accumulated base of shared knowledge or common knowledge about what’s going on. Because even though people are having conversations with a trusted person, people in their networks, in their personal relationships or families, that doesn’t necessarily mean that that information then gets shared widely within Russia. But it’s really important because usually when we see defections taking place in the context of mass movements, it’s precisely because people have personal relationships that are at stake, and they’ve decided they want to have a different future than the one that the leader is leading them down. So I think it can be very important. It’s not clear how long it can go on given the fast-changing pace of events on the ground within Ukraine.

GAZETTE: Should we expect that things will play out very differently today than they would have perhaps 25-30 years ago because of the existence of the Internet and social media?

CHENOWETH: Social media really complicates this because it does put all the cards in the hands of whoever dominates social media, which, at this point, is the Russian government in Russia. So I’m much more skeptical about how social media helps in these contexts. Putin has already restricted the social media platforms that he feels he can’t control. The ones that are still [operating] should tell us something about the degree to which the Russian government feels like it has either co-opted them or will provide them more useful information and intelligence than it will the opposition.

GAZETTE: Do protest movements typically unfold differently in totalitarian countries than in democracies?

“Protests are only successful if they begin to nudge people in positions of influence to change their assessments of their own interests.”

CHENOWETH: In authoritarian regimes, large bursts of mass mobilization typically come as a surprise to people on the outside, precisely because of this issue that the economist Timur Kuran calls “preference falsification.” That’s the idea that people generally act like they will effectively go along with everything until they decide that the ship is going down. And then there’s a collective critical mass that begins to puncture the narrative, and then, all of a sudden, you can see these huge mass mobilizations that seem like they’re coming out of nowhere, but that actually are built on years or decades of long-simmering dissent, power-building, turf wars, personal rivalries, and other things.

In democracies, you just see much more kind of open contestation over the discourse. And there are a lot more social movements fighting for space on the agenda. And then there’s also a really predictable electoral cycle through which most of the issues that we argue about get channeled every couple of years. So, there’s much more of a focus on effectively channeling protests, mobilizing energy into policy through elected officials. In authoritarian regimes, that’s not the case at all. Usually, the focus is more on, when it comes to mass mobilization, trying to create a change in who’s in power locally, regionally, nationally.

In authoritarian regimes, especially authoritarian regimes that feel under attack, there’s a tendency to clamp down on anything that looks like oppositional activity. I should add, increasingly, autocrats, and Vladimir Putin in particular, rely on pro-government protests to try to legitimize themselves when they do feel under pressure. In the past 15 years, there have been large-scale protests, particularly against Putin in Russia. One of the strategic responses from Putin has been to create and bolster a pro-Putin civil society that is willing to show up and defend him. So, if overt anti-war protests do persist, over time I would expect to see the emergence of pro-Putin protests and rallies, as well.

I think it’s important not to underestimate that Putin does have a real base that’s incredibly loyal to him. The majority appear to support him and the invasion. But it is very unclear the extent to which people who participate in pro-Putin rallies are from the base versus opportunists who want to profit from their loyalty.

GAZETTE: Are street-level protests still an effective means of political or civil resistance?

CHENOWETH: Collective protest is extremely restricted in Russia, and public opposition to the war is illegal. Using the words “war,” “invasion,” and I think “occupation” in the course of reporting about protests is also illegal. Independent media sources have been either shut down or muzzled so that they cannot speak about what is going on. That makes overt protest pretty risky. But that’s also what can make it so affecting when it goes on regardless of how harsh the response might be. As the scholar LaGina Gause has argued in her new book, protest can be quite effective when it signals that people are willing to put their bodies on the line or go to prison. As a result, these are quite fluid, unpredictable situations. But like I mentioned earlier, protests are only successful if they begin to nudge people in positions of influence to change their assessments of their own interests.

GAZETTE: What are the critical elements that help determine whether protest movements will achieve their goals?

CHENOWETH: Size is really important. Especially in a country the size of Russia, small protests are much less likely to make a mark than large-scale protests. The second is defections. They win when they begin to shift the loyalties of people whose day-to-day decisions can really move the needle as opposed to people who ordinarily would be in opposition anyway. The third thing is staying power — the ability to effectively maintain resilience, even as repression continues and escalates. And the last thing is tactical innovation. Not just continually protesting or marching, but also beginning to do work stoppages, limited strikes, general strikes, other things that begin to impose further costs and demonstrate the resolve and commitment of the people involved.