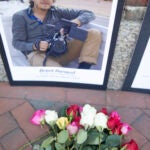 Along with concerns over the possible deployment of tactical nuclear weapons, the Biden administration is now warning that the Russian military may launch a chemical weapons attack in Ukraine. Russia has used chemical weapons during past conflicts, notably in Chechnya and Syria, in violation of international law. Russian officials denied Biden’s accusation during a U.N. Security Council meeting Tuesday.

Matthew Bunn is James R. Schlesinger Professor of the Practice of Energy, National Security, and Foreign Policy at Harvard Kennedy School and co-principal investigator of the Belfer Center’s Project on Managing the Atom. Bunn spoke with the Gazette about Russia’s potential use of chemical and biological weapons in Ukraine and how the Biden administration and the West may respond. Interview has been edited for clarity and length.

GAZETTE: Biden officials have warned that Russia may deploy chemical or biological weapons in Ukraine. Why, and what kinds of things might they do?

BUNN: From a purely military perspective, there are no military targets that nuclear, chemical, or biological weapons could destroy that Russia can’t destroy with its airpower and rockets. The main purpose of using them would probably be to try to shock the Ukrainians into surrender.

Unfortunately, a lot of Russia’s capabilities are secret. Under the Biological Weapons Convention, they’re not supposed to have any biological weapons, but they are thought to be violating that convention and still maintaining some offensive biological weapons capability. Similarly, under the Chemical Weapons Convention, they’re not supposed to have any chemical weapons anymore, but are believed to have significant stocks. They have used small amounts of chemical weapons in assassinations or assassination attempts against dissidents, both in Russia, against Alexey Navalny, and in the U.K., against Sergei and Yulia Skripal. With chemical weapons, they could kill a lot of Ukrainian military people and they could attack civilians, as they have been doing with their conventional weapons. They have a lot of escalation opportunities just with their conventional weapons, as we’ve been seeing in recent days, as they shift to shelling and bombing cities more or less indiscriminately, and also directly targeting civilians.

GAZETTE: What’s the difference between a chemical weapon and a biological weapon?

GAZETTE: How do nuclear weapons fit into this? Would Russia escalate from conventional warfare to chemical and/or biological weapons before reaching for nuclear options?

BUNN: An obvious rationale would be that it’s a smaller step from conventional weapons to nuclear weapons. No one has used nuclear weapons in anger since 1945 and there is a very strong presumption against their use. Nobody knows what would happen if nuclear weapons were used again. There are at least three very different kinds of nuclear use that could occur. One would be what’s sometimes referred to as a demonstration shot, where you detonate in the sea or a remote area and very few people are killed, basically as a warning. Another would be you detonate it on a major military target or even a city. A third would be you attack NATO territory. I think Russia is deterred from attacking NATO territory. So far, just as NATO has been very careful not to send any of its troops and not to send any weapons with offensive capabilities that might escalate the conflict to involve NATO, Russia similarly has been very careful not to attack NATO targets even with conventional weapons.

BUNN: My bet is less than a 5 percent shot that nuclear weapons will get used in this conflict. I wish I thought it was inconceivable; I no longer think it’s inconceivable. My colleague Francesca Giovannini had a piece quite early in the invasion in the Bulletin of the Atomic Scientists, saying if things get to what she called “a hurting stalemate,” which is exactly where we are right now, where Putin can’t afford to lose, the plausibility of escalating to the use of a nuclear weapon would be noticeably higher. I think that’s where we are.

GAZETTE: Are there any effective ways for NATO to prevent or counter the use of chemical weapons?

BUNN: I imagine that NATO and the Biden administration are actively, but privately, messaging various parties to try to deter this from happening. I would guess that part of the long conversation between Biden and Xi was Biden leaning on Xi to warn the Russians, “We will not be with you if you do this.” Russia would be totally isolated in the world if it used any of these weapons against civilians. There were 35 countries that abstained on the UN General Assembly resolution condemning Russia’s invasion, including some big ones like China and India. Virtually all countries would condemn Russia if they went this direction, and some which had refused to join in sanctions before might be convinced to do so.

But there is a very difficult problem of what to do if Russia does this. Striking back with military force raises the risk of escalation to a war with Russia, which nobody wants. But more sanctions? There’s not much more that we haven’t done already that seems adequate to the task of deterring Russia from going forward. And so, exactly what the response should be is a difficult policy challenge that I have no good answer to and to which I have not heard a good answer from others. I am of the view that political and economic responses, and getting support from those that have not yet joined in, like China and India, are likely to be more important, along with the massive humanitarian response that would be needed, than any kind of military counterstrike.