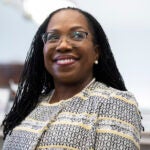 Ukraine’s President Volodymyr Zelensky said in a CNN interview on Sunday that he was ready to negotiate with Russian President Vladimir Putin, but if the talks failed, “that would mean that this is a third world war.”

Zelenksy told CNN’s Fareed Zakaria that “without negotiations, we cannot end this war,” adding “if there’s just a 1 percent chance for us to stop this war, I think that we need to take this chance.”

With most of the world in agreement on this, a trio of experts took up the question of how best to negotiate an end to the war during a virtual talk Friday sponsored by the Harvard Law School’s Program on Negotiation. They outlined three key factors going forward: Russian President Vladimir Putin is not to be trusted; trust is not absolutely necessary; and the best way forward is to find more avenues for exchanging concerns.

Eugene B. Kogan, c0-author of “Mediation: Negotiation by Other Moves” and a research associate at Harvard Business School, suggested using back channels to open direct lines of communication with the Russian leader and he offered Rex Tillerson or Condoleeza Rice as possible interlocutors.

Both are former secretaries of state and have had numerous contacts with Putin, he said. In addition Tillerson had a prior experience with Putin as Exxon chairman, and Rice is a scholar of the Cold War and a Russia expert.

“We’re not going to be … flipping a switch and trust becomes possible,” he said, “but you are establishing elements of a connection with the opposing decision maker that can give you insights into his logic.”

Robert Mnookin, the Samuel Williston Professor of Law at Harvard Law School and author of “Bargaining with the Devil: When to Negotiate, When to Fight,” outlined a potential negotiated deal. The terms would include the recognition of Crimea as part of Russia and a referendum in the Donbass region on whether residents want to be annexed by Russia or remain part of Ukraine. As part of the same accord, Ukraine would remain a sovereign state but pledge never to join NATO, he said.

Mnookin acknowledged such an agreement means that Russia would be “achieving a number of things by reason of aggression,” which is not a good precedent. He also expressed concerns that the United States and other Western allies run the risk of pressuring Ukraine to cede more ground to Russia than it is comfortable doing. That could set the stage for conflicts down the road. The key, he said, is to ensure the “Ukrainian government itself decides to make this deal.”

To reach any agreement with Russia, coercive negotiation will be necessary, said Kogan, who outlined the importance of emphasizing factors already at play, such as the multi-nation economic and financial sanctions against Russia and the fierce resistance of fighters in Ukraine who are preventing Russian troops from achieving military victory. The threat of additional deterrence or the imposition of redlines that cannot be crossed are a third option. Such tactics, he said, aim to “lower the perceived benefits of continued war in Ukraine for Russia.”

Yet even before an end to the fighting is reached, diplomats and representatives from Ukraine and Russia as well as other countries and nongovernmental organizations should begin efforts to help the most vulnerable in the war zone and those fleeing the fighting, said Alain Lempereur, the Alan B. Slifka Professor of Conflict Resolution at Brandeis University, affiliate faculty of the Program on Negotiation, and lead author of “Mediation: Negotiation by Other Moves.”

“The goal of conflict mitigation is not to end the war, but to address immediately the human consequences of war,” he said, such as the need for food, water, shelter, and medical care.

“If coercion could be used as a tool to get a responsible deal in conflict resolution, in this case, you really need as much as it is possible to trigger the humanitarian impulse in every belligerent so that they agree to these humanitarian deals,” said Lempereur.

The panelists agreed China could have a critical role to play in brokering some kind of deal or cease fire. A diplomatic historian by training, Kogan said he could see leader of the world’s most populous country taking a lesson from Henry Kissinger’s diplomacy. During the Vietnam War, the former national security adviser helped the United States develop closer ties to both the Soviet Union and the People’s Republic of China than they had with each other. Those diplomatic efforts ultimately resulted in President Richard Nixon’s historic trip to China in 1972.

“I think to ask the question is to answer it,” Mnookin said.