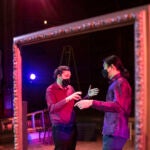 Harvard Film Archive scholar breaks down ‘The Godfather,’ which is turning 50, to explain its lasting appeal

Francis Ford Coppola’s “The Godfather,” was an instant hit with fans and critics when it premiered in New York on March 15, 1972. In his review for The New York Times, Vincent Canby called the film, based on Mario Puzo’s mafia novel, “one of the most brutal and moving chronicles of American life ever designed within the limits of popular entertainment.” Now considered a film classic and cultural touchstone, the movie’s lasting appeal is rooted in its groundbreaking visual style and standout performances, says Haden Guest, director of the Harvard Film Archive. This interview has been edited for length and clarity.

GAZETTE: Why is this film considered such a classic?

GUEST: The lasting hold of “The Godfather,” and its status as a milestone film, have been lavishly celebrated as it approaches its 50th year. I think it is also important to recognize Coppola’s film as a chapter in the rich and longer history of the American gangster film, a genre that began to capture the popular imagination in the late 1920s. “The Godfather,” in fact, readily acknowledges that history and legacy through a series of allusions to past gangster films such as “The Roaring Twenties” and “Little Caesar,” among many others. Beyond its engagement with the history of genre, “The Godfather” can more broadly be seen as a vital bridge between the classic Hollywood of the studio-era (seen early on in the film during the visit of consigliere Tom Hagen to make the infamous offer that can’t be refused) and the New Hollywood of the 1970s. Coppola draws from the deep well of film history in so many fascinating ways that I think contribute to the film’s continued resonance.

Of course, the performances are absolutely central to the film’s status as a classic. Here too “The Godfather” acknowledges its place in film history by staging a meeting of different generations of performers, most notably embodied in Marlon Brando and Al Pacino, two very different actor’s actors of the Method School now cast as father and son, as if emblematic the passing of the baton. Underscoring this is the presence of other amazing studio-era actors such as Sterling Hayden and Richard Conte, who was a really pivotal figure in two-fisted gangster films in the ’40s and ’50s.

GAZETTE: The film has been widely praised for its visual style. Who was really behind the look of the movie?

GUEST: One key to the remarkable look and feel of the film is the work and vision of the director of photography, Gordon Willis, an absolutely brilliant cinematographer. In the very first “I believe in America” shot of “The Godfather,” you have this incredible abstraction of the blackest, deepest blacks against the white of Brando’s tuxedo as he sits in his darkened office hearing the pleas of the father desperate for revenge. Here Willis announces immediately that the film’s exploration of right and wrong, of crime and justice, is going to be complex and difficult, set in different shades than the black-and-white terms through which gangster stories are often imagined. Willis took full advantage of existing technology, of film stocks and lenses that allowed him to created layers of black and shadow never before possible in a color film. He did so by responding to the script and to Coppola, but it was really his decision to go as dark as possible. There are many other shots that are seemingly underlit with deliberate purpose and effect. Willis played a pivotal role in defining the look and feel of key scenes, like the one in the Italian restaurant where Michael himself chooses to enact vengeance and kill Sollozzo.

GAZETTE: Do you have a favorite scene? And can you break it down for us?

GUEST: I think that restaurant scene is one of the best in the film. From the very beginning to the end, from Michael climbing into the huge, glistening car to the moment of hesitation where he forgets to drop the gun, there is a constant building of tension that makes it absolutely riveting. When we enter the restaurant, we know that it is soon going to become a crime scene, and this knowledge ignites our imagination of this modest neighborhood place that is so vividly evoked and depicted. The loud pop of the cork when the waiter opens the wine and the tension while he fills the glasses, and the men wait to speak. Coppola’s fastidious attention to period details and evocative gestures, the tiles on the floor, Sterling Hayden’s napkin tucked high up in his collar — these demand our attention and pull the viewer intensely into the scene, drawing attention to the seemingly smallest detail.

And then the climatic shooting where Pacino shoots a bullet straight into the middle of the policeman’s forehead as he eats his veal scaloppine, that’s an image designed to have maximum impact. Like the broken glasses in Eisenstein’s “Battleship Potemkin.” Of course, we can’t give credit solely to Coppola and Willis. They were working with a team of art directors and designers and as a team they allowed this scene to burn slowly before exploding in a moment of cataclysmic violence, with both the build-up and climax rendered as graphically and tonally impactful, and memorable, as possible.

Embodied in the modest Italian-American neighborhood restaurant is also the world that Michael is saying goodbye to, the quiet life he could have lived as a veteran, and seemed to want at the film’s beginning. When he kills the two men at the dinner table and calmly walks out with all the customers at the other tables staring at him, he is bidding farewell to what could have been, choosing to enter into a life of crime, a decision from which we know there will be no turning back.

GAZETTE: Do you remember when you first saw the film and can you recall your first impressions?

GUEST: I was born shortly before “The Godfather” was released so did not see it until many years later. I watched the film first when I was around 12 years old, too young I’m sure, and it had a huge impact on me less for the violence, although that was certainly disturbing, than for the way it conjured up the historical past with such a richness of detail and luster.