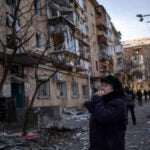 Riffing from his recent book, “Republican Rescue: Saving the Party from Truth Deniers, Conspiracy Theorists, and the Dangerous Policies of Joe Biden,” Christie told David Gergen, J.D. ’67, former White House adviser and founder of the Center for Public Leadership at HKS, and Bridget Toomey ’23, that “of course” he was “disappointed” in Trump for his handling of the Capitol assault. But he noted that he’d had similar reactions to the misdeeds of other presidents, like Bill Clinton and Richard Nixon.

Repeating objections he first made on election night about Trump’s baseless claims of election fraud, Christie said more people need to “call out” Republicans who are also “playing this game.”

“You cannot stand behind the seal of the president of the United States, in the East Room of the White House, and tell the American people that the election is stolen and not present them with any evidence that it’s been stolen,” he said. “Because people believe the president, a lot of people do, and they think to themselves, ‘Well, he wouldn’t say that unless he knew something.’ He knows nothing!”

He said that the war in Ukraine, record inflation, and high gas prices at home are not good for President Biden and the Democrats. These factors could drive more support to the Republican Party in the upcoming 2022 and 2024 elections, especially as the spotlight on Trump, who retains a significant amount of popularity with GOP voters and donors, continues to gradually fade.

“The smaller Trump’s presence, the greater you’ll see Republican popularity in a general election electorate increase,” said Christie, who briefly ran against Trump in 2016 and headed his transition team that year. He also did some work during the campaign, playing Hillary Clinton and Biden during Trump’s debate prep in 2016 and 2020.

While “not supremely confident” that Republicans would retake control of the U.S. Senate in November, Christie was certain they would retake the House of Representatives “as long as we don’t do anything stupid.”

He praised Biden’s infrastructure bill and the administration’s handling of sanctions on Russia over Ukraine. Christie was not, however, optimistic that Biden will be able to get much more of his legislative agenda past Sen. Mitch McConnell and Rep Kevin McCarthy if Republicans retake control of Congress next year in the same way that President Bill Clinton was able to finesse Republican Sen. Majority Leader Bob Dole and Speaker Newt Gingrich in 1994.

“Clinton, in my opinion, was the greatest political talent of my lifetime,” said Christie. “As a practitioner of the craft, Bill Clinton is about as good as they come.”

Is there a Republican figure like Clinton on the horizon who could emerge as the party’s next leader?

“I don’t see anybody out there,” he said.

While he had tough words for Trump, Christie suggested he still isn’t quite ready to entirely abandon him. Should he be the Republican Party’s nominee in 2024, Christie said he would vote for Trump again if the Democratic Party candidate was someone he considers unacceptable, like Sen. Bernie Sanders of Vermont. He would not identify other candidates who could potentially get him to vote against Trump, saying it “depends” on who else is running.

Christie, who turns 60 later this year, took swipes at the ages of both Biden, who is 79, and Trump, who will be 78 in 2024, characterizing them as part of a political generation that has overstayed its welcome and now needs to move aside. “Time to go,” he said.

“This is the toughest job in the world. You’ve got to have somebody who’s prepared and ready — intellectually, spiritually, emotionally, and physically — to do this job. And so, it’s time, David. It’s time,” Christie said.

When asked whether he may run again in 2024, Christie, who mentioned he was in New Hampshire earlier Monday talking about foreign policy, only said, “We’ll see.”