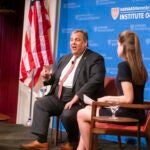 The Nieman Class of 2022, composed of journalists from all over the world, gathered Tuesday at Science Center Plaza to pay tribute to fallen colleague Brent Renaud, a 2019 Nieman Fellow who was killed in Ukraine by Russian soldiers.

An award-winning filmmaker and photographer, Renaud died in the city of Irpin, outside Kyiv, on March 13, while working with Juan Arredondo, also a 2019 Nieman fellow, on a documentary focused in part on the millions of refugees who have fled Ukraine since the Russian invasion. Arredondo is at a hospital in Warsaw undergoing treatment for injuries suffered in the attack.

The memorial service was an initiative of the Nieman Class of 2022 to honor Renaud and Arredondo and call attention to the perils journalists face around the world, said Anne Marie Lipinski, curator of the Nieman Foundation at Harvard.

“Even though they didn’t know these men, the Nieman Class of 2022 feel a bond to them through their work and also through their Nieman connection,” said Lipinski.

Assembled around a portrait of Renaud placed at the Meyer Gate, the class read a statement that underscored both the risks and the value of journalism.

“In the first three months of 2022 alone, 17 journalists have been killed around the world. With the rise of authoritarianism, our profession has become more dangerous and even more necessary. As a class, we are honoring Brent’s work by doing what drove him as a journalist: shining light on the marginalized, the oppressed, and the overlooked.”

Renaud reported on a wide range of topics in his documentary films, including the 2010 Haiti earthquake, meth addiction in rural Arkansas, young refugees in Central America, and anti-extremism campaigns in Africa and the Middle East.

“He was one of the leading documentarians of his generation,” said Lipinski. “He was one of the kindest humans I’ve ever met. He was generous, a little bit shy, and I think that helped him make a very compelling figure out in the field. He didn’t come at you, he waited for you to come to him. He was genuinely interested in everybody and in their stories.”

Messages from the Nieman Class of 2019 were read aloud during the memorial. The group recalled Renaud’s talent, his gentle ways, his sense of humor, and his shyness. “He was humble, kind, gentle,” wrote Matthew Teague, a contributing writer for National Geographic. “He, almost frustratingly, always wanted to hear about others rather than talk about himself.”

Esther Htusan, the first Nieman Fellow from Myanmar, said of Renaud, “He was killed while trying to tell the story of people in Ukraine and of the truth. He will be remembered as our hero, a beloved friend, and colleague.”