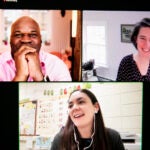 Harvard president says they wield greatest influence through teaching, scholarship, even in crisis like Ukraine

Speaking to an audience gathered at Imperial College London, Harvard President Larry Bacow alluded to the unsettling resemblance between the Russian invasion of Ukraine and Nazi Germany’s assault on Poland, which launched World War II.

“At a visceral level, this feels almost like 1939 all over again,” said Bacow on Monday afternoon during a conversation with Professor Mary Ryan, Imperial College’s interim vice-provost (research and enterprise).

The discussion, which was livestreamed, focused on the issues shaping universities, including free speech, diversity, and inclusion, as well as those raised by crisis like the Russia attack. Bacow also addressed the wider role institutions of higher education have in improving society.

“It’s important that the world takes note, as it has,” he said of the invasion. “There are responsibilities that we all bear to speak out, to be noticed. We’ve tried to do that at Harvard as I’m sure you’ve done it, here at Imperial. But in the end, institutions like ours influence the world largely through our teaching and scholarship.”

At Harvard, for instance, scholars from various parts of the University, including the Harvard Kennedy School, Harvard Law School, and the 49-year-old Ukrainian Research Institute, have written and spoken extensively to media outlets and in classrooms to expand understanding nationally and globally on various aspects of the conflict. In addition, several members of Harvard Medical School have traveled to Ukraine to render medical assistance.

Bacow underscored the importance of free speech at colleges and universities as part of a greater commitment to the pursuit of truth. And he discussed the ways Harvard protects free speech on campus and the effort it makes to ensure all voices are heard.

“Truth is something that needs to be tested,” he said. “And that can only happen in an environment in which people are willing to engage in serious debate, not just where they’re willing to engage with people who think differently from them. They need to be willing to be proven wrong. Believing in truth doesn’t mean that my job is to persuade you that I’m right or wrong, it’s to engage in a mutual search for truth.”

Beyond furthering knowledge, Bacow said, institutions of higher education have a responsibility to work toward making the world a better place, both fairer and more just. That is the driving force behind Harvard’s commitment to diversity and inclusion, he said, as a way to promote social and economic mobility. “We need to recognize that we have the capacity to alter the trajectory of people’s lives,” he said.

Bacow called on students at both Harvard and Imperial College to use the privilege of their education to join the effort, and he shared his hopeful view on the future.

“I believe in the capacity of people to seize the moment and find ways to address the grand challenges of the world,” Bacow said. “Look at the last two years with COVID. It’s remarkable if you think about it, notwithstanding the extraordinary tragedy of 7 million people who’ve died throughout the world, that we’ve been able to develop vaccines, and we’re doing a better job now distributing these vaccines around the world. And let us not forget that the vaccines were produced in a year but were based upon 30 years’ worth of scientific research. I believe in what we do at places like this, which really is to invent the future, a better future for all of us.”