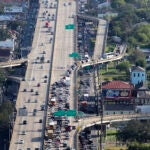 Every year, half a million weapons enter Mexico illegally from the U.S., and many of them are military-style weapons that end up in the hands of drug cartels and other violent criminals, said Alejandro Celorio Alcántara, legal adviser of the Mexican Ministry of Foreign Affairs.

“In addition to prosecuting criminals and seizing guns that are illegally in Mexico, we decided to go to the source of the problem. Like if this were a toxic river, in addition to cleaning the river, we need to go to the source and stop the toxic waste from being dumped at the river,” said Celorio Alcántara, referring to the landmark lawsuit the Mexican government filed against 10 U.S. gun manufacturers in U.S. federal court last summer. It is the first time that a foreign government has sued American gunmakers.

Celorio Alcántara spoke on Thursday at the online panel “Exporting Mayhem: Suing Gun Manufacturers in the U.S. to Stop Violence in Mexico” about the public health crises created by gun violence on both sides of the border and the legal arguments behind the action. The panel was sponsored by the Petrie-Flom Center for Health Law Policy, Biotechnology, and Bioethics at Harvard Law School.

Mexican officials have said that a significant part of the epidemic of violence and crime that has plagued their nation in recent decades is driven by the illicit traffic of weapons from the U.S. Mexico has restrictive firearms laws, with one gun store in the entire nation and only about 50 permits issued per year. Between 70 to 90 percent of guns recovered at crime scenes in Mexico can be traced back to the U.S. Drug cartels, in particular, buy those weapons in the U.S., mostly in Texas or Arizona, and smuggle them across the border.

The lawsuit accuses gunmakers of marketing strategies and business practices to “design, market, distribute, and sell guns in ways they know routinely arm the drug cartels in Mexico.”

Alicia Ely Yamin, Senior Fellow in Global Health and Rights at the Petrie-Flom Center, drew a parallel between the lawsuit by the Mexican government and the settlement between Remington and the families of nine people killed at Sandy Hook Elementary School in 2012. In total the gunman, armed with an AR-15-style rifle, took the lives of 20 children and six adults in the attack.

Both lawsuits focus on the firms’ marketing strategies that target individuals who pose a higher threat of gun violence, said Yamin. The settlement with Remington announced Feb. 15 awards the families $73 million and, more importantly, requires the gun manufacturer to release internal company documents about their marketing strategies.

Mexico’s legal action is novel and innovative in its efforts to pierce the veil of impunity that has been constructed in the U.S. to protect gun manufacturers, said Yamin. Since 2005, when President George W. Bush signed into law the Protection of Lawful Commerce in Arms Act, or PLCAA, gun makers have enjoyed immunity from lawsuits because it shields them from liability when their arms are used in deadly crimes.

For Heidi Li Feldman, professor of law and co-director of the joint degree in law and philosophy at Georgetown University, the Mexican lawsuit is legally complex, but if it’s successful it could open possibilities for further lawsuits against U.S. gun manufacturers.

“At the heart of the Mexican complaint is the intuition that if you are feeding your guns into a criminal market and marketing your products to construct a criminal market, that is both intuitively and fundamentally unscrupulous,” said Feldman. “It may be good for your profits, but it’s clearly contrary to the social welfare. And that’s the angle that I think will ground one of the most promising arguments that the Mexican government is going to bring.”

Celorio Alcántara said the lawsuit is an effort to hold gun manufacturers accountable for their business practices and marketing strategies that are fueling gun violence in his country.

“This is not a lawsuit against the Second Amendment,” said Celorio Alcántara. “The companies we’re suing know their products end up in Mexico. They know their products are hurting people in Mexico, and they do nothing to change their business practices. We want to hold them accountable. We need our day in court.”

The panel was sponsored by the Global Health and Rights Project, a collaboration between the Petrie-Flom Center and the Global Health Education and Learning Incubator at Harvard University, and the Mexico program at the David Rockefeller Center for Latin American Studies.