Penny Pritzker ’81 elected next senior fellow of the Harvard Corporation 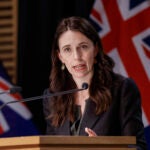 Pritzker succeeds William F. Lee ’72, who has served on the Corporation since 2010

Penny Pritzker ’81 will become the Harvard Corporation’s senior fellow, succeeding William F. Lee ’72, the University announced today. A former U.S. secretary of commerce and Cabinet member, civic and business leader, nonprofit trustee, and philanthropist, Pritzker has served on the Corporation since 2018. She was elected by her Corporation colleagues to become senior fellow as of July 1, 2022.

Pritzker’s deep ties and service to the University go back decades, including service on Harvard’s Board of Overseers from 2002 to 2008.

She was a founding member of the Corporation Committee on Facilities and Capital Planning and has served on visiting committees for the Art Museums, the College, the Graduate School of Design, and the Graduate School of Education. As a Corporation member, she currently serves on the Committee on Governance, the Committee on Finance, and the Joint Committee on Alumni Affairs and Development, which she previously co-chaired. She is also a board member for the Harvard Allston Land Company, supporting the University’s plan to create a thriving ecosystem — to drive both local and global innovation — in Allston.

Pritzker will be the first woman to serve as senior fellow of the Harvard Corporation.

“Penny Pritzker brings an extraordinary mix of qualities to this important role — distinguished service across the public, private, and nonprofit sectors, far-reaching experience as a board member and civic leader, and a decadeslong devotion to Harvard and our highest aspirations,” said President Larry Bacow. “She cares deeply about inclusion and opportunity, and about the power of education to change lives for the better. We will be fortunate to have someone of Penny’s experience, judgment, dedication, and breadth of interests as our new senior fellow. She’ll be a worthy successor to Bill Lee, who has served Harvard with such remarkable wisdom, insight, energy, and humility over nearly two decades on the governing boards.”

“I’m deeply honored to have been chosen as senior fellow of the Harvard Corporation,” said Pritzker. “Harvard’s commitment to educating citizen leaders, to pathbreaking research, and to creating opportunity and knowledge that help people around the world has never been more important. I look forward to working with President Bacow, my fellow members of the Corporation, and the wider Harvard community to advance that vital mission and the ongoing pursuit of Veritas. I am also grateful to Bill Lee for his friendship. He has devoted much of his life to Harvard, and I want to pay tribute to his remarkable leadership as senior fellow. He has been a wise counselor, a thoughtful adviser, and a dedicated steward of the excellence and values that underpin this extraordinary institution.”

Pritzker is widely respected as a business and civic leader, and noted as an advocate for inclusive opportunity, including efforts to improve economic prospects for low-income families in Chicago and across the country. She co-founded Chicago’s P33, a nonprofit working to transform her home city into a tier-one technology hub with greater inclusive economic growth for more women and people of color, and she was recently named to the advisory council of the Smithsonian American Women’s History Museum.

She served as U.S. secretary of commerce under President Barack Obama from 2013 to 2017, as well as on Obama’s Council on Jobs and Competitiveness and his Economic Recovery Advisory Board. She also administered the president’s Commission on Enhancing Cybersecurity. During her tenure as secretary, she created the Commerce Department’s first-ever skilled workforce initiative, launched and managed the Manufacturing USA network of 16 regional innovation hubs, and managed the $4.2 billion broadband deployment program for unserved and underserved areas, among other achievements.

Pritzker is currently chair and founder of the global investment firm PSP Partners and its affiliates, Pritzker Realty Group, PSP Capital, and PSP Growth. In addition to her work at PSP Partners, she has founded a number of other businesses in real estate, senior living, technology, and financial services. She also serves on the boards of a number of companies, including Microsoft and Icertis.

Pritzker will also bring to her role experience as a volunteer leader for a range of civic and nonprofit institutions. She is a life trustee of the Museum of Contemporary Art, Chicago; founder of Skills for America’s Future and Skills for Chicagoland’s Future; chair of the board of the Carnegie Endowment for International Peace; and a member of President Biden’s Council of Advisors on Science and Technology. She is a former trustee of Stanford University, a past member of the Chicago Board of Education, a former member of the board of the Council on Foreign Relations, and past chair of the Chicago Public Education Fund. Pritzker has been recognized with the Woodrow Wilson Award for Public Service, as well as the Harry S. Truman Award from the American Association of Community Colleges.

Aligned with her leadership in other areas, Pritzker’s longtime philanthropic efforts have increased access to economic and lifelong learning opportunities for families across the country, and last year she took on the urgent work to combat the pandemic in her home state as chair of the Illinois COVID-19 Response Fund.

Pritzker’s support of Harvard includes most recently a transformative gift to support a new home for Economics faculty, students, and staff, which promises to catalyze a new era of collaboration and connection in pursuit of solutions to global problems. In announcing the gift, Pritzker said she was motivated to support the Economics Department’s “incredible, cutting-edge work to understand the drivers of a more inclusive economy for more people across our nation and the world.” Pritzker Commons, a dynamic common space at the Harvard Science Center made possible by Pritzker and named in honor of her parents, opened in 2017 and quickly became a hub for students, used for convening, collaboration, programming, and social events.

“Penny Pritzker has been an outstanding colleague on the Corporation, and she’ll be a terrific new senior fellow, fully dedicated to helping Harvard thrive,” said Lee. “For me, the opportunity to serve on the Corporation, alongside two extraordinary presidents and great colleagues on the governing boards and beyond, has been a singularly gratifying experience. Our role on the boards is largely about doing what we can to enable our remarkable faculty, students, and staff to do their best work. And at its best, that work can make an enormous positive difference in the world. It has been a privilege to have done what I could do to help make that good work happen.”

A nationally recognized trial and appellate lawyer specializing in intellectual property matters, Lee is a longtime partner and former co-managing partner in the law firm WilmerHale. In recent years he has regularly taught winter courses at Harvard Law School, first as the John A. Reilly Visiting Professor and then as the Eli Goldston Lecturer on Law. Apart from his Corporation service, he has also served as lead trial counsel for Harvard in the lawsuit challenging aspects of Harvard College’s admissions practices, which is pending review by the U.S. Supreme Court.

“For all of us privileged to work with him, Bill Lee is, and remains, a superb colleague and leader — wise, thoughtful, open-minded, strategic, selfless, and always focused on doing what’s right,” said Bacow. “As with other great team players, many of his most important contributions don’t show up in the box score. Bill has always been there for us, helping to keep Harvard on a steady and ambitious course. I, like many others, have benefited enormously from his wise counsel. Bill elevates every conversation that he participates in, and his trusted leadership on the governing boards has been invaluable. I look forward to further opportunities to thank him, but I know we can never thank him enough.”

Lee will continue serving as senior fellow until he steps down from the Corporation on June 30, 2022, having completed 12 years of service.

The Harvard Corporation, also known as the President and Fellows of Harvard College, is the smaller of Harvard’s two governing boards. Chartered in 1650, the Corporation exercises fiduciary responsibility with regard to the University’s academic, financial, and physical resources and overall well-being. It consists of the president, the treasurer, and 11 other members known as fellows.