Is American democracy in peril? 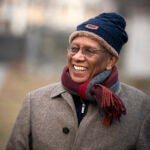 Claudine Gay says U.S. is dealing with historic levels of political polarization, but there is reason for hope

Political scientist Claudine Gay said her interest in the field developed out of a desire to understand what motivates the political choices and behaviors of ordinary people and “how well those perspectives are represented in national politics.” Since the Capitol riots on Jan. 6, 2021, Gay, the Edgerley Family Dean of the Faculty of Arts and Sciences and Wilbur A. Cowett Professor of Government and of African and African American Studies, has found herself rethinking how she approaches the discipline and reconsidering the foundational norms, values, and institutions long considered central to American democracy. She shared some of those thoughts in a recent exchange with the Gazette. This interview was edited for clarity and length.

GAZETTE:  American democracy appears to many to be on shaky ground right now. How does that affect your work/scholarly perspective?

GAY: As a scholar, I feel challenged in bringing the normal paradigms and theoretical frameworks we rely on in political science to understanding the conditions that we face right now in the U.S, because so many of the assumptions that typically ground our thinking have been upended. This crystallized for me as I witnessed the aftermath of the Jan. 6 attack on the Capitol. Here was a moment when thousands of people turned against American democracy itself, choosing violence as the way to achieve their aims. I thought a threat that profound would shock and unify us. But it, instead, has generated as polarized a response as any other issue or event. That reality has disrupted my thinking, and it forces us all in the discipline to consider anew the basic norms, values, and institutions that we’ve taken for granted as stable (and stabilizing) features of American political life.

GAZETTE: Can you talk a bit more about your reaction to Jan. 6? Has it evolved since the event itself?

GAY: Before I became the dean of FAS, I taught a course titled “Democratic Citizenship,” the study of public opinion and political participation in contemporary American politics. The question we kept returning to is the basic premise of democracy, whether ordinary people can be trusted to make consequential decisions. And as we interrogated that idea over the course of the semester, we would focus increasingly on the conditions that enable ordinary people to make consequential decisions, realizing that context matters.

Since Jan. 6, I have been thinking about how many of those conditions are directly under assault. One of those conditions is access to a common foundation of facts, which play a central role in the functions of a democratic society. But with a fractured media landscape, as well as the echo-chamber-like quality of social media, Americans now live in separate “factual” universes.

Another important contextual factor is equal access to a transparent, secure electoral process. Our democracy is made better the more we all participate, not when fewer people participate. And yet nearly two dozen state legislatures are working with relentless energy to erect barriers that will make it even more difficult to vote. If successful, these measures may have the effect of erasing whole groups of people from American political life.

Another condition that we talked about was the confidence that your voice will be heard and represented, which is the most basic expectation of democracy. A sense of political efficacy, reinforced by evidence of democratic responsiveness, is in part what motivates people to participate. From extreme partisan gerrymandering to the continuing attempts to discredit the 2020 election, all of these efforts give citizens ample reason to question whether their voices are heard and represented.

GAY: I’m not sure if I take “comfort” in the idea, but it does help to put this moment in perspective. Multiracial democracy is a work in progress for the U.S. — that’s undeniable. But a sense of alarm about signs of democratic backsliding, given what is at stake (including our credibility in the world), still feels appropriate.

GAZETTE: How do we ensure that democracy survives in this country?

GAY: One answer might be a bipartisan consensus and commitment to re-establish a common foundation of facts (for example, about the outcome of the 2020 presidential election), and to reaffirm the importance of broad-based democratic participation. But such consensus is elusive. If it were a fringe movement outside of politics that aimed to sow distrust in our electoral system and limit access to the vote, then it would be easier to see how we might find our way to a solution. But this is not happening outside of the political system; rather, it finds expression mainly through the Republican Party. That is what makes this so alarming. It is so hard to see how to break through in any kind of bipartisan way.

GAZETTE: The nation has endured deep divisions before. Why is this moment different?

GAY: The existence of different views and positions, hotly debated and fought over, is normal and, in many ways, is a strength of democracy. But the polarization that exists now is unprecedented in its intensity. It’s reached levels that are toxic when it comes to the ability to come together on any issue. When you have a situation where substantial majorities of Democrats and Republicans view the other party as “immoral” and a “threat to the U.S.,” that is not ordinary political and policy disagreement. There’s no room for even a conversation across partisan lines, let alone compromise.

If we exist in a moment when bipartisan collaboration and compromise are impossible and in some ways anathema to partisans, then we are not well-served by decision-making systems that require supermajorities. If being a Republican now means that you minimize — even embrace and normalize — the Jan. 6 attack, if it means that you continue to discredit the 2020 election, if it means that you believe the problem with democracy is when too many people vote, if that is all part of the identity of being Republican now, how do you engage those partisans in the urgent work of protecting our democracy?

GAZETTE: Can you give me some examples of that work?

GAY: We need federal legislation to protect voting rights, such as the two bills now stalled in the Senate. These bills alone won’t entirely undo all the damage that’s been done through state-level action over the last year and a half, but some of the restrictive measures now in place would be rolled back. Federal legislation is impossible, however, without the elimination of the filibuster, given the Republican party’s commitment to making it maximally difficult to vote.

GAZETTE: Is there anything you look to that gives you any hope?

GAY: What gives me hope is that even as difficult as we make it to vote, so many people persevere and turn out. In the 2020 presidential election, more than 159 million Americans voted, many for the first time. That’s the largest total number of ballots cast in U.S. history, by a wide margin. Citizens overcame all of the obstacles we put in front of them — sometimes waiting in poll lines for two, three hours — to demand that their voices be heard. That to me is the clearest expression of the continuing faith in the power and promise of multiracial democracy, in the belief that ordinary people can be trusted to make consequential decisions. Many advocacy groups are engaged in deep organizing and grassroots mobilization to register new voters and ensure their access to free and fair elections. These efforts were pivotal in 2020 and will continue to be. An expanding electorate, millions of citizens newly awake to the transformative power of the vote, and more determined than ever to be part of the democratic process and to be equitably represented in government — that’s what gives me hope.