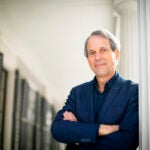 A world tour with David Damrosch

After a pandemic pause in 2021, Hasty Pudding Theatricals resumed Man and Woman of the Year festivities last week, celebrating Jason Bateman and Jennifer Garner in separate events Thursday and Saturday.

During a raucous roast at Farkas Hall, Bateman, star of the Netflix series “Ozark,” was put through his paces on “the quest for the pudding pot.” He danced, performed a stirring rendition of “Eternal Flame,” and even engaged in a swordfight with a younger version of himself, played by Hasty Pudding cast member Ben Topa.

“I wasn’t prepared in the slightest. … I don’t even sing in the shower,” Bateman said in a press conference after the roast. “It was awesome and super flattering and incredibly bizarre. I haven’t had an experience like that in my life, which is saying something — I’ve been at this for a while.”

Bateman has received multiple accolades for his work, including an Emmy, a Golden Globe, and a Screen Actors Guild award. He’d heard about Hasty Pudding from his manager, Aleen Keshishian, who received her A.B. from Harvard in 1990. But the honor came as a big surprise.

“She called me and I didn’t think it was serious,” he said. “How does Harvard give an award to anyone who doesn’t have a high school diploma? I thought it was a joke. I’m still trying to figure out how and why this happened.”

As for the pudding pot, Bateman said it will have a place in front of his Emmy.

“You can’t put any pudding in an Emmy,” he said. “That stuff makes me nervous, this fills my soul. There’s a big difference.”

On Saturday, Garner reveled in her role as Woman of the Year, braving cold temperatures to parade down Mass Ave. atop a crimson-colored convertible Bentley. Clad in a black coat, gray slacks, and crimson-tipped mittens, the “Alias” star waved to the crowd, posed for selfies, and smiled as troupe members repeatedly leaned in for a smooch.

Like Bateman, Garner was put through some ribbing before claiming her pot. Roasters combined humor with admiration, lauding the actor for her work as an entrepreneur and philanthropist. (She is the co-founder of an organic baby food company and a trustee with Save the Children.) When the teasing started, Garner, whose films include “13 Going on 30,” “Elektra,” and “Juno,” was more than game. She happily went along as Molly Chiang ’23 and Lucy Goldfarb ’23 handed her a “magic” saxophone to play with backup from a member of the orchestra (Garner played the instrument in her high school marching band), poked fun at her squeaky-clean image, and made her reenact the dance from “13 Going on 30” to Michael Jackson’s “Thriller,” to earn her golden pot. The honoree didn’t miss a beat.

During a press conference following the roast, Garner discussed her philanthropic work and praised the research of Jack Shonkoff, director of Harvard’s Center for the Developing Child, whom she called a “mentor.” Asked about goals for her charity work, Garner said she would like to see more robust policy initiatives around rural America and early education.

Garner said she loved “every single part” of being Woman of the Year, but highlighted the question-and-answer session she’d had with the students earlier in the day. “I’ve just have grown very attached to this group of kids in one day,” she said, “so that was really special for me.”

As for where she will keep the pot, Garner said she is still mulling it over. “I don’t know. Where does one put something valued above their children?”