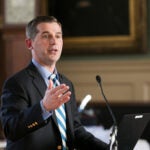 Paulette Barnes’ legal victory in 1977 was a landmark sexual harassment case and should have mattered more and sooner, Brandeis Professor Anita Hill said Thursday during an online talk sponsored by Harvard Radcliffe Institute.

Barnes sued the Environmental Protection Agency for eliminating her position after she rejected her boss’s sexual advances. She lost in a lower court but won on appeal in an opinion written by famed federal Judge Spottswood W. Robinson III.

That opinion captured “the workplace power dynamics that culminated in the suit,” Hill said, reading from her new book, “Believing: Our Thirty-Year Journey to End Gender Violence.” It was the first time, she continued, the law had linked “the relatively new claim of sexual harassment to more developed race discrimination law,” affording it the “same degree of social concern.”

The case should have revolutionized how society and the law treated such bias, said Hill, an expert on antidiscrimination law and policy. But over the ensuing decades, that linkage was largely ignored, leaving women vulnerable to such behavior in and out of the workplace and facing “denial and dismissiveness” of their claims. That includes Hill herself, who famously recounted her own struggles before an unconvinced Senate Judiciary Committee in 1991 when she accused then-Supreme Court nominee Clarence Thomas of sexual harassment, she said.

Hill said it took others in politics and the law much longer to connect race and sexual discrimination the way Robinson had. That was in part because concepts such as intersectionality had yet to be introduced into the cultural conversation. That lack of understanding, she said, was on display in her case when the senators listening to her testimony “didn’t understand the connection, couldn’t see where my experience with sexual harassment fit with any kind of legal concern that should be raised, or any kind of ethical concern or conflict,” because they couldn’t understand the vulnerability of women in such workplaces.

Radcliffe Dean Tomiko Brown-Nagin, who introduced Hill, and Professor Evelynn Hammonds, who moderated the discussion, noted that the conversation was particularly timely given the backdrop of a lawsuit alleging misconduct by a Harvard professor, one of several high-profile cases that in recent years have drawn attention to the persistence of gender discrimination as a national and global issue.

“A conversation on the issue of gender-based violence with Anita Hill, who has spoken truth to power for 30 years, could not be more important today,” Brown-Nagin said. “My position is that as an institution of higher education, we must seize opportunities to explore issues like this and to engage deeply and openly.”

Hill’s new book is part memoir and part legal and cultural analysis of the decades since her Senate testimony. At the time, Hill was taken aback by the level of skepticism she received from the Thomas panel and even much of the general public. “The public, then, I believe, saw the hearing through the eyes and experience of the people in power … and not [through the point of view of] the victims and survivors, myself included,” she said.

Although there is today much broader acknowledgement of the pervasive challenges of sexual harassment and abuse than was true 30 years ago, Hill said, there is still much more to learn, beginning with “whether or not we can get beyond our own experience and understand vulnerability for other people.” Education, she said, is also part of the way forward. The refrain “Just get over it,” which Hill said is too often heard by those who have suffered, needs to be stamped out with education and such education needs to start early.

For example, telling young boys that pinching, punching, or verbally insulting girls or children who are gay can “ultimately lead to “much more violent behavior,” she said. Instead, society should be helping boys better and more appropriately express themselves, she added, “and we’ve got to stop telling girls that the way a person shows them that they like them is by hurting.”

Hill sees better reporting on the frequency of gender harassment as another important step, along with broadening the definitions of assault. “We in this country need to get beyond the idea that people have to come in broken and bloody in order to raise a claim.”

“Other forms of legal interventions” that can bring victims into the process to be part of the conversation are also important in developing effective ways to address gender-based violence, said Hill. Government has an additional role to play in helping promote economic sustainability and affordable housing for people who are vulnerable. And “mental health, and physical health and well-being measures” must be considered as part of the solution, she said.

Asked by Hammonds, the Barbara Gutmann Rosenkrantz Professor of the History of Science, what gives her hope, Hill said she is buoyed by the progress made in the past three decades; by the recognition that “our systems and structures have failed us” and need changing; by the case of Activision Blizzard, a videogame company sued for its toxic workplace culture; and above all by seeing “every day that people are working to make the world safer.”

Hill also said she is excited about President Biden’s plan to nominate a Black woman to the U.S. Supreme Court. “I am looking forward to what discussions we’re going to have around that nomination,” said Hill. “It could be an important moment for us to understand both race and gender and how they intersect in today’s world and the importance of having representation on the Supreme Court.”