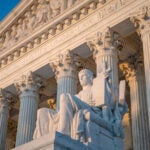 In her new book, “Looking for the Good War: American Amnesia and the Violent Pursuit of Happiness,” Elizabeth D. Samet ’91, professor of English at West Point, makes the case for demystifying World War II. The Gazette spoke with Samet about how a “sentimental narrative” about World War II took hold in the American imagination after the losses of the Vietnam War and how it shaped, for better or worse, a false sense of national destiny. This interview was edited for clarity and length

GAZETTE: You dedicate this book to your father, a World War II veteran who died in 2020. How would he have reacted to this book?

SAMET: My father died in December of 2020 while I was working on the last revisions to the book. He was, in large measure, the reason I wrote it. The whole project has its deepest roots in something we used to do together: I grew up watching World War II movies with him, and that was my first exposure to depictions of war in popular culture. My father was an air traffic controller in the Army Air Corps and served in a series of stateside bases and overseas in India. He was very young at the time, and I think he saw a lot of things that he never expected to see. I’m sure we would have agreed about certain points and disagreed about others in the book, and I think we would have had some great conversations. He was a man who valued the pursuit of truth, and it’s my persistent sadness that he was not able read it.

GAZETTE: What are the roots of the mythology about World War II being the “Good War”? How did it take hold in the American imagination?

SAMET: The most robust version of the mythology surrounding World War II is that of the 50th-anniversary commemoration, which took place in the 1990s. One of the people most closely identified with this version is the historian Stephen Ambrose, whose series of books about World War II were wildly popular; they’re fast-paced narratives that tell a particular story of the “Good War” and portray American service members as decent, boyish liberators who come to seem larger than life. Tom Brokaw labeled them the “The Greatest Generation” in his book of the same name. In terms of popular culture, several films that came out around that period, but particularly Steven Spielberg’s film “Saving Private Ryan” cemented this mythology in our imagination.

It’s an immensely flattering and seductive narrative. It seized the imagination because it came in the wake of wars that could not have been described as victories, chiefly Vietnam. In addition, the 50th anniversary came close on the heels of the First Gulf War, which was an overwhelming spectacle of American power and was viewed by the first President Bush, who was a World War II veteran, as the war that would once and for all cure what he and others called the “Vietnam syndrome.”

This concatenation of events crystallized the mythology and effectively wiped away the traces of the deep ambivalence — and differences of opinion — about World War II that existed while it was being fought and in its aftermath. But my book is not an argument that our participation was either unjustified or unnecessary. I believe it was both justified and necessary. It’s not an attempt to diminish in any way the cruelty or crimes of the regimes that we defeated or the significance of Allied victory. It’s not a history of the war per se, but rather of how it entered our national imagination and was transformed into something else.

GAZETTE: As a result of that mythology, you write, there is a “sentimental narrative” about World War II that obscures the historical reality of the conflict. Can you explain?

SAMET: When we think back to World War II, we say, “Everybody was united, everybody was behind the war,” and certainly in comparison to subsequent wars, that’s true. But that was not exactly the case. Before Pearl Harbor, there were many Americans who had no desire to intervene in the war: the America First committee — among whose members were public figures, U.S. senators, and a national hero, Charles Lindbergh — all were isolationists, and some were alarmingly sympathetic to European fascism. The isolationist sentiment was very strong after World War I.

Pearl Harbor changed a lot of minds, but the idea that everybody changed overnight is overstated. Several months after Pearl Harbor, members of the Roosevelt administration were worried that the country was growing complacent again. It is also the case that Pearl Harbor focused us on Japan — and the cry was to avenge, not to liberate — but we still didn’t declare war on Germany. Germany declared war on us. The idea that we went to war specifically or primarily to liberate Europe is largely a fiction, even though we obviously helped to accomplish that feat. There were plenty of people in the United States who weren’t interested in joining the world’s struggle against fascism and resented what they perceived to be the Roosevelt administration’s pushing the country closer and closer through Lend-Lease and other initiatives. We went to war because we were attacked and because we felt suddenly that there was an existential threat. We didn’t feel that before.

Another part of the myth is that everybody welcomed veterans with open arms. Movies and newspapers of the period present the figure of the World War II veteran as a wanderer, a modern-day Odysseus, a drifter, but that view has been mostly forgotten. Even at the time of the war’s 40th anniversary, a more nuanced view of the war was still prevalent. Around this time, Studs Terkel published his oral history of World War II [“The Good War”], which included everything from gung-ho veterans to the deeply damaged, from enthusiastic patriots to others who admitted they really didn’t know what the war was all about. What I admire about this work is that there’s no attempt to weave one coherent story, to unify the many attitudes toward the war. It offers a much healthier alternative to sentimentality — to remembering the war in a sort of hazy, rosy glow as a moment when everybody was 100 percent united by a cause and to celebrating the generation that fought it as possessing a kind of a greatness that was unmatched before or since.

GAZETTE: You say that to understand the mythology of World War II, one must understand that of the Civil War and the so-called Lost Cause of the Confederacy. What do these mythologies have in common?

SAMET: I view those as the two cataclysmic events in American history: the great domestic crisis of the Civil War in the 19th century and the transformative experience of World War II on the international stage in the 20th century. We can see all around us the damage done by the ways in which we have memorialized the Civil War. Eric Foner, the great historian of this period, has explained, “The Confederacy lost the war on the battlefield but won the war over memory.” We’re still dealing with that legacy every day. The Civil War feels very distant to us, World War II less so, of course, because there are veterans who are still alive. We have a powerful emotional response to those veterans — how could we not? It has taken us a long time to start to reckon with the consequences of uncritically accepting Civil War myths for so long. Even though it’s hard to understand the perils of the myth when it’s still being lived out, I wanted to suggest the magnitude of what happens when you buy wholesale a particular myth of war. That’s why I cast that retrospective glance on the Civil War.

GAZETTE: What do your students at West Point think about World War II?

SAMET: My students, when they graduate, will be commissioned as second lieutenants in the Army. To many of them, World War II is ancient history. What unites them is that, as one of my first-year students put it last semester, they’ve never known a country that’s not at war. Like so many Americans, they know about the Greatest Generation and the notion of the good war. They are also taken with the image of the World War II soldier as it is filtered through comics and the movies made from them, such as “Captain America.” So many comic-book heroes came of age fighting Nazis during World War II.

There’s sometimes an assumption that when we talk about war or teach war at West Point, we don’t teach anything that’s anti-war or that we don’t show the realities of it, which is grossly unfair to my students, who are thoughtful, committed, capable of deep introspection. We teach a wide range of literature, including some of the most searing anti-war memoirs. Who knows better than a veteran how terrible war is? Do my students believe the image of American soldiers as agents of freedom? Is that appealing to them? Absolutely. In the best case, one hopes that they will find themselves in that place, but they may also have to reckon with the ambiguity and confusion with which veterans of the wars of the last 20 years are dealing right now.

GAZETTE: What are the dangers of perpetuating myths about World War II?

SAMET: World War II gave us a way to look at the world as an unambiguous contest between good and evil. We have used a vocabulary that was inherited from it: Fascism became Islamofascism, the Axis Powers became the Axis of Evil, the second President Bush’s term to describe a constellation of unrelated adversaries. It also left us with the belief that the exercise of U.S. force would always magically bring about victory and would serve the cause of liberating the oppressed. As a result of that, we find ourselves, after decades of war and loss, having to reckon with the fact that our way of thinking and talking about war and about the world is hopelessly out of date. There’s an irony in the fact that a country that has always been predicated on reinvention and looking to the future now seems to draw its greatest strength from an event that happened 80 years in the past.