Why disability bias is a particularly stubborn problem 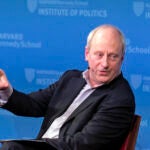 Seething populist anger and lessons for U.S. in German elections

Our most negative societal prejudices can fade, but what sparks that change, and what does it mean when those views haven’t budged in years? Tessa Charlesworth, a postdoc in the Department of Psychology, has dedicated her research in recent years to these questions, and some of her newest analysis has turned up a troubling trend involving implicit biases toward disabilities.

Charlesworth, Ph.D. ’21, who works in the lab of  Mahzarin Banaji, has found that those hidden prejudices have hardly changed over a 14-year period and could take more than 200 years to reach neutrality, or zero bias.

“Implicit bias can change. But so far, it’s only changed for some groups,” Charlesworth said. “It changed for sexuality and race bias pretty dramatically. Sexuality biases dropped 64 percent over 14 years, but it hasn’t changed at all for disability, age, or body weight bias. Disability bias over 14 years has only shifted by 3 percent. The disparity between the change in sexuality bias and the stability in disability bias is massive.”

Charlesworth noted that greater shifts are being seen in explicit biases, particularly those about disabilities, which have dropped 37 percent. She said that it is possible, given the long stability in implicit disability bias, that explicit biases could largely disappear before the implicit ones substantially budge.

New data shows that, based on the rate of past movement, it will likely take more than 200 years for implicit disability biases to reach neutrality. Researchers make projections using forecasting techniques similar to those used in predicting stock markets or the weather. By contrast Charlesworth noted that changed attitudes on sexual orientation are already very close to reaching a point where survey respondents do not associate being gay with bad and straight with good.

To track implicit biases, researchers tested how quickly subjects associated different concepts with being good or bad, using a test co-developed by Banaji, Charlesworth’s adviser, the Richard Clarke Cabot Professor of Social Ethics, and a regular co-author. They then relied on data archives from the last 14 years to detect changes. They looked at six different social biases: race, sexuality, skin tone, body weight, age, and disability.

“In and around Cambridge there are so many knobby brick roads with tree roots in the sidewalks that are totally ableist. And yet, for a long time, I just took that for granted and didn’t think it was a problem.”
— Tessa Charlesworth

Implicit biases, which Charlesworth described as “more automatic and less controlled” than more conscious explicit beliefs, are usually widespread in society and tend to come from personal experiences, upbringing, and the media, she said. Typically the majority of people have positive associations with groups who are dominant or hold power in society, such as those without disabilities or white men. On the other hand, individuals tend to have more negative associations with marginalized groups, including people of color, those with disabilities, or members of the LGBTQ community.

As part of her research, Charlesworth challenged the longstanding assumption that implicit biases are so ingrained that they cannot be changed. She found that was not the case and that implicit bias shifts along with the views of the wider society.

“My new research tells us that these are the kinds of social events that are prompting transformation not only in our explicit conscious values, but also in that cognitive monster of implicit bias,” she said. Charlesworth believes it will take a similar movement of national reckoning to spark change in people’s implicit biases about disabilities.

“The amazing thing about Black Lives Matter and previous social movements [is that they] created national conversations that brought that bias to the front of everyone’s mind,” she said. “If you were sitting around at the dinner table, it was hard not to have a conversation about racism in the summer of 2020. I think that changing the conversation and bringing disability bias to the front of the mind for the everyday person will be necessary to change that bias as well.”

Banaji agreed that society needs to change the narrative when it comes to disability.

“Recognizing the truth — that every disability may come with a unique way to know the world that could create innovation, a different way to solve problems,” Banaji said. “When we see somebody in a wheelchair, [let] the first association that pops into our heads be, ‘Wow, I wonder what they know that I don’t know. I wonder what they can teach me that I could never know.’”

Charlesworth says her next move will be to look around the nation to see whether there are localities or regions that are leading change on disability bias. Banaji noted that it could be useful to compare the different investments that city, state, or federal governments make to support the disabled and see whether they correlate with residents’ attitudes.

“There are practices that you can do to start to become even just a little more aware of how implicit bias shows up,” Charlesworth said. “When I first started this research six years ago, I started noticing the number of places that don’t have ramps or the number of places that have really narrow sidewalks. In and around Cambridge there are so many knobby brick roads with tree roots in the sidewalks that are totally ableist. And yet, for a long time, I just took that for granted and didn’t think it was a problem. That’s how implicit bias becomes baked into our environments and can create these associations of who seems to be welcomed or valued.”