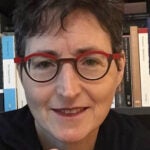 New York Times columnist Ross Douthat ’02 writes candidly about his five-year struggle with Lyme disease in his wrenching and vivid new book, “The Deep Places: A Memoir of Illness and Discovery.” The Gazette spoke with Douthat about the lessons he learned about himself and other people’s suffering, the controversy around Lyme, and how he finally managed to control his illness and recover. This interview was edited for clarity and length.

GAZETTE: What are the most common misconceptions about Lyme disease?

DOUTHAT: There are two related misconceptions. The first is that it’s a simple matter to treat; that all you have to do is take four to six weeks of antibiotics and you should automatically feel better. This is a common belief because it’s true; 80 to 85 percent of people who get Lyme disease can treat it and get better very quickly. But then there is a substantial population for whom that short treatment doesn’t work, and they end up with long-term symptoms that the existing scientific consensus doesn’t know how to treat. The basic problem is the gap between the simplicity of treatment for the majority and the incredible difficulty of treatment for a small but substantial minority.

The other misconception is not just about chronic Lyme disease, but about chronic illness in general. There is a sense, when you haven’t lived through this kind of experience yourself, that having a chronic illness is just a slightly worse version of people’s everyday struggles. People with chronic illness will report that they have headaches or sleeping problems or fatigue and people who aren’t sick hear them and think, “Well, that sounds like what everybody goes through sometimes.” And this then feeds into the sense that people with chronic problems are malingering, that they’re obsessed with their own symptoms, that they’re hypochondriacs, and all these kinds of cliches and stereotypes. Obviously, sometimes those stereotypes fit, but in most of the cases that make up what we call chronic Lyme disease, you’re dealing with something that is devastating, that is not just occasional fatigue or occasional headaches. It’s a pain that literally never leaves you alone. One reason I wrote the book was to try to convey some of that reality more clearly; that whatever is going on with chronic illness, whether it’s Lyme or long-haul COVID or chronic fatigue syndrome or anything else, it is a genuinely devastating problem for the people afflicted by it.

GAZETTE: How did you finally manage to control the disease?

DOUTHAT: There are doctors who offer treatment for chronic Lyme disease, which basically involves that you keep treating the disease with antibiotics until the symptoms abate, but you have to be willing to treat with not just one antibiotic, but combinations of antibiotics. You also must do some slightly strange things like what gets called pulsing, where you go on antibiotics for a little while, go off and go on again, and then go off again. The idea being that this is a bacterium that has a lot of different ways to hide in the body to escape both your immune system and antibiotics, and that the patient needs more complex and flexible treatments rather than just a simple one.

This approach to treatment is the approach that I ultimately took after a long period of unsuccessful efforts. It took me a while to find a combination of antibiotics that helped me. I would not have clawed my way back to something close to health without this method. The challenge is that it is so complicated and so tailored to the individual patient that it requires doctors who are willing to essentially experiment from patient to patient and do something slightly different depending on how the patients respond. I’m extremely frustrated with the medical system’s failure to recognize that this is the right way to go, but I also understand why it’s been hard to convince people that this is the best practice because it is so outside the kind of simplicity that we look for in treatment.

GAZETTE: Is that part of the controversy around Lyme disease? Is there another illness that is so controversial?

DOUTHAT: There is a longstanding pattern where chronic illnesses are initially regarded as forms of hysteria and hypochondria. Only over a long period of time do they get recognized as having pathogenic and physical concepts. In the early days of studying multiple sclerosis, lots of people assumed that it was some hysterical or psychosomatic illness. Similarly, with chronic fatigue syndrome, there’s been a long struggle to get doctors in the medical system to take it seriously. What we’re seeing with long-term COVID is a sort of accelerated version of that. But even there, there is a lot of skepticism and uncertainty about the reality of long-haul symptoms. That is part of the nature of chronic illness. With Lyme disease, though, it’s a little bit distinctive, because with a lot of other diseases, there’s a real struggle to figure out what could cause them. With Lyme, there’s no question. Lyme is a tick-borne illness. A lot of chronic sufferers feel like it should be easier to break through and get care, but for some reason that hasn’t changed this fundamental and recurring pattern where chronic illness is just met with skepticism and disbelief, no matter what form it takes.

GAZETTE: You write in your book about the history of Lyme disease, and you include a conspiracy theory about how it spread. What do you think is the most plausible explanation for how Lyme disease originated?

DOUTHAT: We know that Lyme disease is an ancient pathogen that is present in different forms in both the United States and Western Europe. And there is, I think, a plausible story about its re-emergence in the 20th century that says that this was a disease that was deep in the forests of the northeastern United States. When those forests were cleared by the first European settlers, the habitat for deer and other animals that carry the ticks was dramatically reduced. Then settlers moved west, and a lot of the New England soil was abandoned in the 19th century, but then in the 20th century, with suburbanization, you got people building communities that were interwoven with deer habitats. That would explain the explosion of Lyme disease around 1975. Presumably it starts with the suburbs, and then it gets accelerated by climate change, which creates shorter winters, which are better for ticks because fewer of them die. Now Lyme disease is prevalent in much more of the U.S. than it was 30 or 40 years ago.

There is also a conspiracy theory, which focuses on the fact that the epicenter of the Lyme outbreak in the Northeast happens to be literally a bird flight away from a bio-weapons laboratory on Plum Island, near the northeast coast of Long Island, New York. We don’t know that any specific research on Lyme disease was ever carried out there, but we know that there was research on ticks and tick-borne illness. It does seem like a weird coincidence in the same way that the presence of the Wuhan Coronavirus Laboratory in Wuhan seems like a weird coincidence. I think that it’s not a crazy theory at all. The most intense zones of Lyme disease are northern Long Island, Nantucket, Martha’s Vineyard, Cape Cod, and Eastern Connecticut, and that is a strange coincidence. At the same time, there is a clear Lyme outbreak in the Upper Midwest in Minnesota and Wisconsin, and that wouldn’t be the result of a laboratory leak. I think the most you can say is that if there had been an escape from that laboratory it would have maybe created a slightly more virulent strain of Lyme disease, but basically an outbreak would have happened anyway. But if the conspiracy theory is correct, maybe some reckless science made it a little bit worse.

GAZETTE: What’s the craziest thing you did during your struggle with Lyme?

DOUTHAT: I think that the weirdest thing I tried certainly was this thing called a “Rife machine,” which is a device that generates audio frequencies that are supposed to essentially make bacteria vibrate and shatter in the way that an opera singer’s voice at the right pitch can make a glass shatter. This is something that’s clearly outside the scientific consensus that when I describe it to people, I always preface it by saying this is going to sound like pseudoscience. There are a few suggestive studies around this stuff, but it’s highly speculative. It’s not something the FDA would recommend tomorrow (laughs), but I did buy such a machine. I did use it. And I do think it helped me. But when you use it, you feel like you’re participating in a bizarre science fiction movie. You’re very far beyond the realm of normalcy when you’re doing this, but your perspective on what is worth doing and worth trying changes in ways that you would not imagine before you get sick.

GAZETTE: What was the most unexpected lesson you learned during your battle with Lyme?

DOUTHAT: One unexpected lesson was to learn how many people go through, not Lyme disease per se, but some version of pain or suffering. When I was sick, I lost my filter. I didn’t write about it, but I would tell anyone how I was doing, and they got probably more than they expected out of that conversation (laughs). But when you opened up, they would open up too and share a story of suffering about their own life or a loved one’s life that was hidden in everyday experience. Everyone knows that everybody ages, gets sick, and dies, but there’s still a lot of concealment of how much suffering there is among very privileged and successful people. It was not just an education in my own suffering, but an education on how commonplace these kinds of falls and secret challenges can be.

And that’s one of the things that I would want readers to take away. The book is both written for people who go through these kinds of things to offer solidarity and recognition, and because I did manage to get a lot better, some hope too, which is just incredibly important for anyone going through these multiyear processes of mystery and agony and the quest to recover yourself. But then it’s also an attempt to show to a wider audience how transformative and damaging chronic illness can be. The long-haul COVID has brought this more into public consciousness. We’ve made progress relative to prior eras in dealing with a lot of very acute illnesses that cause immediate forms of suffering and death, but what remains is this challenge of the illness that doesn’t kill you, but also doesn’t go away. We have a long way to go in reckoning and wrestling with that.