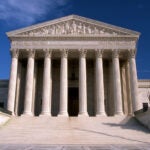 Many state legislatures are embroiled in bruising partisan battles over the redrawing of their state and congressional districts following the completion of the 2020 U.S. Census.

Amid questions about new laws on voting in 37 Republican-controlled states, a dozen states are already in court and many more are expected to follow with a decade’s worth of electoral advantage at stake. Last week, the Department of Justice filed suit against Texas over its new map, alleging it “deliberately” denies or abridges the rights of Black and Latino voters, which violates section 2 of the Voting Rights Act of 1965.

During a virtual Ash Center for Democratic Governance and Innovation panel Wednesday evening, moderator Nicholas Stephanopoulos, the Kirkland & Ellis Professor of Law at Harvard Law School, spoke with voting rights and election law analysts about legal challenges to proposed districts and efforts to depoliticize the map-making by creating independent commissions.

“Too often what we’re seeing now is that legislatures are drawing districts and choosing the voters they want to represent,” said Mitchell Brown, voting rights counsel at the Southern Coalition for Social Justice in Durham, North Carolina.

Most states leave the redistricting process to lawmakers, but eight have delegated redrawing district maps to an independent commission in hopes of making the process fairer and less nakedly partisan.

“Commissions offer an opportunity to have a third party draw these districts based on statistical evidence, and other nonpartisan redistricting principles to draw maps that are more equitable than what the legislature would draw,” said Brown.

So far, analysts say, the commissions have had mixed results. While Arizona, California, and Michigan appear to be drawing maps with little internal discord, Ohio and Virginia are fiercely battling over accusations of gerrymandering.

Whether a commission works well stems from how it was formed, said Colleen Mathis, former chair of the Independent Voting Commission of Arizona. “Some states are succeeding, and some have had a lot of challenges, and I think often that gets down to who is on the panel.”

There is wide variation in how states fill commissions. Some have citizens appointed by legislators from both parties; some have a mix of citizens and legislators. Some commissions have complete authority to draw maps without any veto power by the legislature; others do not.

With or without commissions, to get maps that are fairly and accurately drawn depends on who draws the lines, what criteria is used, what remediation process is available in case of dispute, and whether the rights of communities of color are protected, said advocate Cathy Duvall of Fair Representation in Redistricting.

There’s been a marked uptick in accusations of racial gerrymandering and other voting rights legal challenges since the U.S. Supreme Court decision in Shelby County v. Holder in 2013, which struck down two provisions of the Voting Rights Act that required states with a history of voting rights discrimination to get federal approval before changing election laws or practices.

“This is going to be the most litigious redistricting cycle to date,” Duvall predicted. “It’s really going to be hard to find a state where there aren’t lawsuits for congressional and state legislative lines.”

“What Shelby County has allowed legislatures to do is to be emboldened to pass maps that may not pass constitutional muster and say, ‘Hey, catch me if you can.’ Legislatures have argued that they don’t have the mandate to comply with the Voting Rights Act unless the court says they have to,” said Brown.

“And that is a very, very scary proposition, because if nobody challenges this map, if nobody stands up against the legislature, then the legislature will have carte blanche to do whatever it wants to do,” he said.

One positive development since the last redistricting effort in 2011 is that significantly more data are publicly available to evaluate potential districts, analysts say. That significantly helps researchers, litigators, advocates, and others outside government who formerly had limited access to this information, to get a better sense of what maps could and should look like.

The data are being used by academics and consultants to algorithmically generate and study redistricting maps. Although algorithms are not yet being used to draw maps, they could potentially become a powerful tool to discriminate, while offering beneficiaries a veneer of impartiality and scientific rigor.

According to research by Stephanopoulos and Jowei Chen, an associate professor of political science at the University of Michigan, maps generated randomly without the use of racial data resulted in less minority representation, not more, in several states, particularly in the Deep South. That’s because such maps can ignore whether a group’s level of political representation matches its share of the overall population.