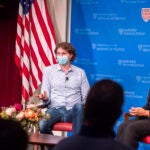 A recurring scene played out across Latin America in the past few years. Masses of angry protesters took to the streets in Chile, Colombia, Ecuador, Peru, and Venezuela to demonstrate against unilateral actions by the political elite, lack of social mobility, infringement of human rights, shortages of food, fuel, and other necessities, as well as other issues. The groups were often met with fierce responses from their governments.

Steven Levitsky, director of the David Rockefeller Center for Latin American Studies, said it should come as no surprise. At a seminar Tuesday on “Protest and Repression in Latin America,” which he moderated, Levitsky explained that the region has many of the ingredients necessary for widespread social unrest, including some of the highest levels of inequality in the world and governments characterized by a “fair amount” of corruption.

“Latin America is predominately democratic with a couple of important exceptions,” he said. “People have expectations. They elect governments that promise to deliver better services, that promise social justice, and then often fail to deliver until all of that creates conditions for protests.”

Levitsky noted that the specific reasons behind the protests vary: Some are anti-authoritarian in nature while others aim to improve the quality of democracy. Government responses, however, have been largely uniform across the region.

“In many countries, such as Ecuador and Peru, the military have been called in to supplement civilian police to respond to protests and have been deployed at times to control ordinary crime,” said Alisha Holland, an associate professor in the Government Department. The results are all too often brutal and sometimes deadly.

“The concern, and what we’ve seen unfold, is that the military has very distinct training and risks committing human rights abuses when it polices protests,” she said. “In other countries, such as Chile, the police were never reformed after the military dictatorship or, as in Colombia, reform efforts were incomplete and never fully separated the police from the military.”

“Something very important for people outside to know is that these protests aren’t really political. People literally have no access to food, water, and medical resources. People are dying because of these things.”
— Steven Levitsky

First-year Guillermo Mogollon is from Caracas, Venezuela, which has seen waves of protests over the last few years. The oil-rich country has dealt with ongoing fuel shortages, frequent power outages, and rampant food insecurity. Mogollon said Venezuela saw a surge of demonstrations in 2019 over food shortages that lasted months. Just 17 years old at the time, Mogollon said he participated in a couple but largely steered clear due to his parents’ fears for his safety.

Mogollon did largely manage to keep himself out of harm’s way, but many were not as lucky, he said. The government, led by President Nicolás Maduro, sought to violently shut down the protests using military and, unofficially, paramilitary forces, according to the 19-year-old.

In Chile, President Sebastián Piñera, who received a doctorate in economics from Harvard in 1976, has continuously responded to ongoing protests by deploying both the military and the highly militarized police force.

“The Chilean right has had a repressive reflex for a long time, going back many, many decades. Even though [Piñera] comes from a much more moderate wing of the right, the Chilean state, the army, and the police — the carabineros — were not dramatically reformed with democratization. This was a shoot-first police force, which is one of the reasons why protests deepened and escalated,” Levitsky explained.

“A few years ago, the initial police response to the protest was brutal. That’s pretty deeply ingrained in the Chilean police force and also in the Chilean right. We saw Piñera’s initial reaction to protests in 2019 was to have a photo op with the military and declare that these were somehow communist infiltrators. I’m not accusing Piñera of being a Pinochetista, because he’s not, [but] it was a Pinochetista-style response and that’s the culture of Chilean right.”

The large-scale demonstrations in Chile eventually led to a referendum for a new constitution to replace the one established during the dictatorship of Gen. Augusto Pinochet. Chile now faces the daunting task of writing a new, more inclusive constitution, as well as electing a new president and legislature.

The protests in Chile and across Latin America are key reminders of the social challenges that often erupt when countries enter periods of slow growth and fiscal constraints, Holland said. And while there may be political aspects to the protests, they should not all be viewed through that lens.

Sophomore Janet Hernández, whose father was a political protester in Cuba before becoming a refugee in the 1990s, emphasized the need for those outside of Latin America to truly hear what protesters are demanding. She said Americans learning about the protests and government responses should remember to center the perspectives of those on the ground over those found in the U.S.

Mogollon agreed, especially when it comes to protests in his home country. People not involved with the protests tend to politicize the protests instead of viewing them as human-rights issues, he said.

“Something very important for people outside to know is that these protests aren’t really political,” he said. “People literally have no access to food, water, and medical resources. People are dying because of these things.”