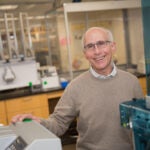 Four Harvard College seniors will study at the University of Oxford next year as recipients of American Rhodes Scholarships.

Michael Y. Cheng, from Wynnewood, Pennsylvania, is a joint concentrator in history and mathematics who is also completing a master’s degree in computer science. He was recently elected president of the Undergraduate Council and was a walk-on member of the Harvard varsity men’s lightweight crew team. At Oxford, Cheng will work toward a master of science (M.Sc.) in energy systems and a M.Sc. in political theory.

Samantha C.W. O’Sullivan, from Washington, D.C., is a joint concentrator in physics and African American Studies. O’Sullivan founded the Generational African American Students Association at Harvard, and has conducted advanced research on the atomic structure of high-temperature superconductors as a member of the Hoffman Lab. O’Sullivan plans to pursue a master of studies (M.St.) in philosophy of physics and a M.Sc. in applied linguistics at Oxford.

Physics concentrator Elizabeth Guo will pursue an M.Sc. in mathematical and theoretical physics and an M.Sc. in social science of the internet at Oxford. Guo, who is from Plano, Texas, is also a researcher in the Hoffman Lab. She is on the staff of The Harvard Crimson and a member of the Harvard College Honor Council.

Trisha N. Prabhu is a government concentrator from Naperville, Illinois. Prabhu recently served as a Civic Digital Fellow at the U.S. Department of Health and Human Services, and is the former president of Harvard Undergraduate South Asian Americans in Public Service initiative. A holder of several U.S. patents, Prabhu plans to pursue an M.Sc. in social science of the internet and a master’s of public policy at Oxford.

Created in 1902 through the will of Cecil Rhodes, Rhodes Scholarships cover all expenses for two or three years of study at Oxford. The 32 students selected from the United States this year represent 24 colleges and include 22 women, the most in the scholarship’s history. Harvard’s American Rhodes Scholars now number 379.

This year’s honorees will begin their graduate studies next October. The U.S. Rhodes Scholars will join an international group chosen from more than 60 countries, and two winners from any country in the world without its own scholarship. Those awards will be announced in the coming days. A full list of U.S. winners can be viewed on the Rhodes Trust website.