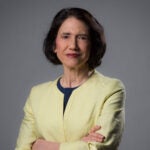 Claudia Goldin has been researching women’s lives in the U.S. economy for almost half a century, focusing on topics including differences in earnings, promotion, and career between men and women, the role of technology in women’s work and personal lives, and changes in college women’s aspirations and achievements. In a new book, “Career and Family: Women’s Century-Long Journey toward Equity,” an expansion of a 2015 Kenneth J. Arrow Lecture at Columbia University, the Henry Lee Professor of Economics looks back at the lives of five generational groups of college-educated women across 120 years and the ways they negotiated the competing demands of jobs, careers, and families. She also addresses today’s history-making upheaval at home and work caused by the COVID-19 pandemic. Goldin recently spoke to the Gazette about her new project. This interview was edited for clarity and length.

GAZETTE: In the book, you write: “When couple equity is abandoned, gender equality in the workplace tends to follow.” Can you explain that process?

GOLDIN: In heterosexual couples, couple equity and gender equality are the two sides of the same coin, similarly with regard to couple inequity and gender inequality. It costs a lot to have a 50/50 relationship, and having kids is expensive. You can give up a tremendous amount of income when you choose flexibility at work. If you take two lawyers who both work for a Park Avenue firm, they’re each making a lot of money when they start working. When they have kids, and one of them then shifts into the boutique firm or into corporate counsel, they’re both still doing pretty well. But that’s a big notch down for one person in terms of income and possibly in terms of the types of cases they do. When there are children (or others who need care) at least one parent must be on call at home. That parent can’t be in a plane flying to Beijing to close the deal. The other parent can, and those jobs are the higher-earning positions and also the ones that lead to greater promotions. We don’t have enough data on same-sex couples yet to do any good measurements on how this affects them, but ethnographic studies show that same-sex couples also split work and family responsibilities, and the reasons are the same as for heterosexual couples.

GAZETTE: What current inflection points are you looking at in regard to women, career, and family?

GOLDIN: I began writing the book in 2017, and I was almost finished in March 2020, when I realized that everything I had been saying in the book was magnified by what was going on with COVID-19 and took on new urgency. Child-care hours for parents had more than doubled. Work from home was spreading in ways that might eventually lower the cost of work flexibility. I could have written the book after March 2020 and the issues would have been the same.

We certainly see that the national conversation has recently focused more on the issue of care. It became very obvious during the pandemic that without adequate schools, child care, and after-school programs and so on, a substantial fraction of the nation’s workforce cannot function. This conversation is, to me, a moment of optimism. The other part of this conversation is being determined by individuals, institutions, and firms. We’re using more technologies that allow people to work in a dispersed manner. It has implications for everything, but it also will determine whether women, and parents in general, will be able to take jobs that previously they thought they couldn’t take because of travel and being on call. In my work, I have been saying that the real issue is not flexible jobs — the real issue is the cost of flexible jobs. Purchasing the flexible job means going down a pretty large notch in terms of income and promotion. Remote work and technology like Zoom really have the potential to lower the cost of flexibility by a lot.

GAZETTE: Do you see any historical echoes in these national conversations?

GOLDIN: What I find fascinating as a historian is that 78 years ago, in 1943, the nation realized that it could not have the factories operating without the labor of women, so it switched money from an infrastructure bill called the Lanham Act to fund preschools for children 3 to 6 years old. It opened very early in the morning; it ended in the evening; it was inexpensive; it was high quality. It was every parent’s dream, and it got more women into the workforce.

Before that, the Works Progress Administration, as part of the New Deal, created what were called Emergency Nursery Schools for the children of rather impoverished people. It was done because a third of the nation was ill-housed and ill-fed. The idea was to prevent the next generation from being unhealthy or uneducated. So whereas the Lanham Act was for getting women into the workforce, the WPA programs were for the children and for the teachers and nurses who were unemployed during the Depression. So we can see the cleverness of certain people in Washington to use funds for two purposes at the same time.

GAZETTE: Were there areas of this history that were hard to research?

GOLDIN: History is often not kind to us historians. One of the things that I knew when I was writing the book that it was thin on the Black experience, and I was very regretful about that. By and large, Black women have had higher labor force participation rates than white women for much of American history, even those who were married. For this book, I used existing census data to research marriage rates and employment rates for college graduate women, and the further back you go in history with that data, the thinner it’s going to be on the experiences of particular groups, such as Black, Hispanic, and Asian women. It’s also important to remember that this group of women in the book are a pretty elite group, because they were college graduates. Certainly more can be done to expand the research on different experiences.

GAZETTE: What are some other findings that were surprising to you?

GOLDIN: One of the chapters is about Betty Friedan’s “The Feminine Mystique,” published in 1963. I had read the book and known that Friedan was a great journalist and that much of what she said in the book was overstated. But while researching the data on women in the workplace during the period she was looking at, I realized that many of the statistics cited in the book were completely wrong! The 1950s were not a regression or reversal of educated women’s lives. The college-educated women of “The Feminine Mystique” were no different from the women who preceded them; they just had different constraints and different opportunities. The women of the earliest generation I studied often chose between having a family or a job (sometimes a career). But women graduating college in the 1940s and 1950s had a greater ability to get married after college, to have kids, and then use their training to re-emerge in the workforce. Friedan was studying them while they were married and having children, and she could see that many of them were unhappy in that place, but it wasn’t as retrograde as she claimed because they didn’t have to make the more difficult choice between a job and a family. They could have both. Just not always at the same time.