Powell’s legacy, in admirers’ words and his own 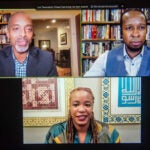 Over his 40-year career, Colin L. Powell embodied the power of public service to transform lives, friends and admirers say.

Powell, who died Monday at age 84 of COVID-19 complications, drew from his experience in the Army, including combat in Vietnam, to become a trusted adviser on national security and diplomacy to presidents of both parties, from Ronald Reagan to Barack Obama. He retired from the military with the rank of four-star general. The son of Jamaican immigrants, he broke through racial barriers as a soldier and as a statesman, serving at the highest reaches of government as the first Black chairman of the Joint Chiefs of Staff and the first Black secretary of state.

“He was a Marshall-esque giant of American national security and the kind of public figure who had a quiet form of greatness that is rare and getting rarer,” Ash Carter, U.S. secretary of defense from 2015 to 2017 and now director of the Kennedy School’s Belfer Center, said Monday in a statement.

“Colin’s passing leaves a big hole in American public life. It also reminds us of the tremendous impact we can have when we devote ourselves to public service.”

Meghan O’Sullivan, Jeane Kirkpatrick Professor of the Practice of International Affairs at the Kennedy School, was on Powell’s policy planning staff when he served as secretary of state in the administration of George W. Bush.

“He was someone who represented the best of America,” she said. “His career and his spirit embodied the essence of public service. He was thoughtful and cautious in his counsel and recommendations, and as someone who experienced war firsthand, he knew it should only be an option of last resort.”

O’Sullivan was there when Powell gave the United Nations speech making the case for the invasion of Iraq.

“Under his direction, his staff members worked meticulously on his U.N. Iraq speech to remove all references that they judged were not concrete or defensible,” she said. “Even so, the speech, which he regretted, turned out to be an unfortunate part of an otherwise incredible and honorable legacy. America lost someone of great standing today.”

On Twitter, Professor Samantha Power, on leave from the Kennedy School while serving as administrator of USAID, recalled Powell as “a barrier-breaking American, tremendous USAID supporter and joyful mentor to countless public servants, including me.”

Nicholas Burns, the Roy and Barbara Goodman Family Professor of the Practice of Diplomacy and International Relations at the Kennedy School, said Powell was “one of our greatest public servants. A courageous and inspirational leader for both the State Department and the military. Admired by all who worked for him.”

As part of an ongoing series of interviews with all the living U.S. secretaries of state from the past 50 years, Powell spoke extensively about his time in the post during an interview conducted by Burns, Harvard Law School’s Robert Mnookin, and James Sebenius of Harvard Business School in October 2015. Excerpts have been edited for clarity and length.

“I will regret it. It was one of the big problems in my life that I will have to live with. But another one of my rules is, when you have had a failure and you’ve made a mistake or something has gone wrong, you study it, you learn from it, you internalize it, you ask yourself what you should have done differently, and then you roll the error up and you throw it over your shoulder because life goes on and you’ve got to go on. You can’t sit around lingering about a failure or a mistake. Move on. If you can’t move on, you’ll always be carrying baggage around that is detrimental to your health and well-being.”

On being the ‘liberal’ in the Bush administration

“The one thing I always had was I knew what the president wanted. I know one of the questions was ‘What did I do with some people who tried to insert things?’ Well, let them try. Where the problems came in is when I felt that where the president was, [others thought] ‘We should try to move him off that position a bit.’ But at the end of the day, I’m just a serviceman — this time, secretary of state — achieving the president’s purpose and the president’s mission. That’s what you get paid for. And if you’re not prepared to do that, or if, for one reason or another, they’re doing something wrong or immoral that you feel is wrong, then you have to walk. But I was never in that position.”

On his immigrant roots

“I’m a child of immigrants. My parents came here from the island of Jamaica in 1920 and 1924. They came here in banana boats — not well-educated people. They came here not just because they needed economic opportunity — they had to leave the country they loved, Jamaica — but they came here also to become citizens of the United States of America. And they were two of the best citizens you’ll ever see in the history of this country. Europe and other parts of the world don’t have that same immigrant experience of incorporating immigrants into the very essence of the society.

“My daddy was about 5 foot 5. Mom was about 5 foot 2 and they were indispensable to my life. Not only those two, but the extended family of Jamaicans that lived in the South Bronx. And what they communicated to me is, ‘We have expectations for you. We didn’t come to this country on banana boats so you could stick something in your nose or drop out of something. Don’t ever even think about it.’ I always had that family upbringing of expectations.”

On the art of negotiation

“I’ve found, in negotiations, always get yourself partially on the side of the other person, understand what they need. Always show respect. Even if we’re the United States of America, I’ve always tried to show respect to the smallest country in the world that wants us to do something with them. No country is unimportant. No person is unimportant.”

On the value of bad news

“One thing I’ve learned is you’ve got to have multiple points of information and contact. In every position, especially as chairman, when I had a personal staff of 1,500 people, I really created a bond where they brought me bad news. But they didn’t always bring it to me as quickly as I wanted it and not when they knew I would really be unhappy.

“But I had trusted agents outside the Joint Staff, outside the Pentagon. I had a phone on my desk that only they knew the number of. There’re about six buddies like this and they were the ones who would call. If I was there and I picked it up, they were free to tell me anything on earth. ‘Powell, do you know how absolutely stupid you looked at that hearing yesterday?’ ‘When are you going to get a damn haircut?’ ‘You know the Republicans are really mad at this.’ You’ve got to. If you don’t have anybody like that in your organization, you will always be suffering from a lack of information or a lack of perspective. Having perspective of yourself in public life and in negotiations and diplomacy is very important to make sure you don’t oversell yourself or you don’t think you’re bigger than you are. Because you probably ain’t, especially if you think you are.”