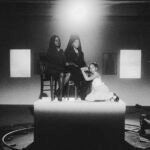 In 1977, NASA created two LP records with tracks of global music, greetings in different languages, sounds of the planet, and sonified images, and then attached them to the two robotic probes launched that year as part of the Voyager space mission bound for the outer solar system and beyond. This Golden Record, said Alexander Rehding, Fanny Peabody Professor of Music, is “effectively a mixtape for extraterrestrial civilizations, a sign that we exist and a glimpse of what human culture is about.”

In his new book, “Alien Listening: Voyager’s Golden Record and Music from Earth,” Rehding and his co-author, Daniel K.L. Chua, a professor of music at the University of Hong Kong, examine the Golden Record’s place in music history and the lessons it teaches us about new ways of listening to and understanding music. Rehding spoke to the Gazette about his longstanding love for this artifact. Interview was edited for clarity and length.

GAZETTE: Where did your interest in the Golden Record come from?

Rehding: About 10 years ago, I taught a class called the Art of Listening. I had one lecture on the Golden Record, as an extreme and interesting form of listening. I kept thinking there was actually far more to it than just this one hourlong lecture. The Golden Record was created in 1977 — during the Cold War, during the oil crisis, after the war in Vietnam, so it wasn’t a happy time. It was a pretty important gesture when NASA sent a message to outer space, especially a message that projected happiness and tried to be welcoming to the other.

Even though the creators of the Golden Record were trying very hard to keep assumptions about human bodies and human ways of doing things to a minimum, the Golden Record was created with some very specific ideas about the kinds of extraterrestrials that would be able to pick it up and listen to it. First, it would help if our aliens had ears or some kind of hearing. Second, they would need something like hands to pick up and handle the records. And third, they would have to have a reasonably developed sense of technology. Carl Sagan, the main spokesperson behind the Golden Record, explained that anyone who would be interested in communicating with humans would likely have an interest in science and would probably have an understanding of numbers. I tend to think of Sagan’s assumed extraterrestrial as a “human-plus.” They can do everything that a human can do, and then several things that we aren’t yet capable of. Of course, the record is as much for humans as it is for extraterrestrials, but it’s rare to find other examples where music and listening were given such a momentous task.

What I find fascinating about the Golden Record is that when it was created, we had no evidence of exoplanets, and this whole idea of extraterrestrial life was a pipe dream, the stuff of science fiction. Since then, astrophysicists have discovered exoplanets and believe there are many billions of them. With these numbers, it now seems statistically quite unlikely that Earth would be the only planet in our galaxy that has life. To be sure, extraterrestrial life could come in microbial life forms and not the technologically advanced civilizations we know from science fiction. But there’s a non-zero chance that someone might listen to the record at the other end. And that’s pretty exciting.

GAzette:  You and Professor Chua used cartoons, activities, and graphics to help illustrate your arguments. What was behind the decision to make the book more interactive than a typical academic volume?

Rehding: I come from the field of music theory, which is a little bit like the engineering of the musical world. We want to see how pieces of music hang together, and there has been this predisposition toward visuals to explain examples in the field. But music theory can be really forbidding, and there’s a lot of technical language that puts people off reading it.

In writing this book, we wanted to work against that impression. On the one hand, we retained some of the imagery in traditional music theory, but on the other we also wanted to make it fun and inviting. We had this idea of including cartoons fairly early on. We added a cutout to make your own Grecian urn in a section about Penelope in Homer’s “Odyssey” — she weaves and unweaves a funeral shroud for her father-in-law to stave off suitors while Odysseus is away — and the Penelopean alternative to Pythagorean music theory that’s not so masculine dominated. Pythagoras is often considered the father of music theory, and he made a connection between music and numbers. Our music theory is much more interested in repetition and difference in music, a bit like Penelope’s shuttle moving back and forth along the warp on her loom. In this image, music is like woven time.

There is also a page in the book where you can hand in your membership card, as an intergalactic musicologist, because we think that everybody is a music theorist. You might not be trained in it, but by listening in any active way, you are performing music theory. Hopefully, these are effective features that will invite people to read this text who would otherwise not read music theory. The publisher deserves a big shout out, because it’s been a huge amount of work for the designers. It really is a labor of love and a lot of people worked really hard to make this happen.

Gazette: This semester, you’re teaching a Gen Ed course called “Music from Earth” about the Golden Record. What do you hope your students will take away from the course?

Rehding It is a music class, but we literally talk about everything else under the sun as well. We talk about the making of the Golden Record, and we talk about what was put on the Golden Record. The creators decided wisely to try and include as many different musical traditions from all over the world, including a raga from India, a wedding song from Peru, and a percussion recording from Senegal. It’s not a perfect compilation, but it’s pretty good, especially given how difficult recordings of non-Western music were to come by in the 1970s.

We talk about representation and music, identity and national identity, because there are historical, geographic, and stylistic differences that are observed on the record. But of course, as soon as you leave Earth’s orbit, all these differences fall away, because there’s no guidance given on where the different kinds of music come from, what function they fulfill, or what historical period they come from. It just becomes blended into music from Earth — Earth music — as opposed to any other music that might exist out there. It’s the fact that we, as a planet, make music that makes the Golden Record special.

The important message is that the people who created the Golden Record really believed in the power of music to communicate, and I love that ambition, the loftiness, and a little bit of craziness that goes into it. I think it’s a question that we should also ask ourselves: How can we use music for communication, especially for communication with someone we don’t know at all? Music has a lot to offer. We have long known that, but we’re still grappling with what exactly that means. I think the Golden Record has a lot to show us in that respect.