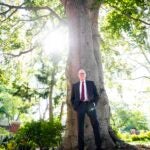 Excerpted from “Rationality: Why It Seems Scarce and Why It Matters” by Steven Pinker, Johnstone Family Professor of Psychology.

Rationality ought to be the lodestar for everything we think and do. (If you disagree, are your objections rational?) Yet in an era blessed with unprecedented resources for reasoning, the public sphere is infested with fake news, quack cures, conspiracy theories, and “post-truth” rhetoric. We face deadly threats to our health, our democracy, and the livability of our planet. Though the problems are daunting, solutions exist, and our species has the intellectual wherewithal to find them. Yet among our fiercest problems today is convincing people to accept the solutions when we do find them.

How should we think of human rationality? The cognitive wherewithal to understand the world and bend it to our advantage is not a trophy of Western civilization; it’s the patrimony of our species. The San of the Kalahari Desert in southern Africa are one of the world’s oldest peoples, and their foraging lifestyle, maintained until recently, offers a glimpse of the ways in which humans spent most of their existence. Hunter-gatherers don’t just chuck spears at passing animals or help themselves to fruit and nuts growing around them. The tracking scientist Louis Liebenberg, who has worked with the San for decades, has described how they owe their survival to a scientific mindset. They reason their way from fragmentary data to remote conclusions with an intuitive grasp of logic, critical thinking, statistical reasoning, correlation and causation, and game theory.

The San track fleeing animals from their hoofprints, effluvia, and other spoor. They distinguish dozens of species by the shapes and spacing of their tracks, aided by their grasp of cause and effect. They may infer that a pointed track comes from an agile springbok, which needs a good grip, whereas a flat-footed track comes from a heavy kudu, which has to support its weight. They then make syllogistic deductions: Steenbok and duiker can be run down in the rainy season because the wet sand forces open their hooves and stiffens their joints; kudu and eland can be run down in the dry season because they tire easily in loose sand.

The San also engage in critical thinking. They know not to trust first impressions and appreciate the dangers of seeing what they want to see. Nor will they accept arguments from authority: Anyone, including a young upstart, may shoot down a conjecture or come up with his own until a consensus emerges from the disputation.

Yet for all the deadly effectiveness of the San’s technology, they have survived in an unforgiving desert for more than a hundred thousand years without exterminating the animals they depend on. During a drought, they think ahead to what would happen if they killed the last plant or animal of its kind, and they spare members of the threatened species. They tailor conservation plans to the vulnerabilities of plants, which cannot migrate but recover quickly when the rains return, and animals, which can survive a drought but build back numbers slowly.

The sapience of the San makes the puzzle of human rationality acute. Despite our ancient capacity for reason, today we are flooded with reminders of the fallacies and follies of our fellows. Three quarters of Americans believe in at least one phenomenon that defies the laws of science, including psychic healing (55 percent), extrasensory perception (41 percent), haunted houses (37 percent), and ghosts (32 percent) — which also means that people believe in houses haunted by ghosts without believing in ghosts. In social media, fake news (such as Joe Biden Calls Trump Supporters “Dregs of Society” and Florida Man Arrested for Tranquilizing and Raping Alligators in the Everglades) is diffused farther and faster than the truth, and humans are more likely to spread it than bots.

How, then, can we understand this thing called rationality, which would appear to be our birthright yet is so frequently and flagrantly flouted? The starting point is to appreciate that rationality is not a power that an agent either has or doesn’t have, like Superman’s X- ray vision. It is a kit of cognitive tools that can attain particular goals in particular worlds.

To understand what rationality is, why it seems scarce, and why it matters, we must begin with the ground truths of rationality itself: the ways an intelligent agent ought to reason, given its goals and the world in which it lives. These “normative” models come from logic, philosophy, mathematics, and artificial intelligence, and they are our best understanding of the “correct” solution to a problem and how to find it. They serve as an aspiration for those who want to be rational, which should mean everyone. A major goal of this book is to explain the most widely applicable normative tools of reason.

Normative models also serve as benchmarks against which we can assess how human schlemiels do reason, the subject matter of psychology and the other behavioral sciences. The many ways in which ordinary people fall short have become famous through the Nobel Prize-winning research of Daniel Kahneman, Amos Tversky, and other psychologists and behavioral economists. When people’s judgments deviate from a normative model, as they so often do, we have a puzzle to solve. Sometimes the disparity reveals a genuine irrationality: The human brain cannot cope with the complexity of a problem, or it is saddled with a bug that cussedly drives it to the wrong answer time and again.

But in many cases a problem may have been presented to them in a deceptive format, and when it is translated into a mind-friendlier guise, they ace it. Or the normative model may itself be correct only in a particular environment, and people accurately sense that they are not in that one, so the model doesn’t apply. Or the model may be designed to bring about a certain goal, and, for better or worse, people are after a different one.

Though explanations of irrationality may absolve people of the charge of outright stupidity, to understand is not to forgive. Sometimes we can hold people to a higher standard. They can be taught to spot a deep problem across its superficial guises. They can be goaded into applying their best habits of thinking outside their comfort zones. And they can be inspired to set their sights higher than self-defeating or collectively destructive goals.

Copyright © 2021 by Steven Pinker. “Rationality” is published by Viking, an imprint of Penguin Publishing Group, a division of Penguin Random House, LLC.