Remembrance of cicada seasons past 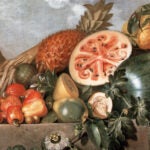 How plants have influenced human societies

Joseph Koerner heard a familiar sound while on a trip to Washington, D.C., in May: the hum of billions of cicadas emerging after 17 years of dormancy.

The Victor S. Thomas Professor of the History of Art and Architecture felt unsettled by the eerie whine. But the cacophony also ignited a deep memory of cicada seasons past and lessons about the interplay between life and art, ideas he brings to his own teaching, particularly when working with students just learning how to make a personal connection to a work — something he will be doing in the fall.

As a child, Koerner posed for paintings and drawings created by his father, the artist Henry Koerner. One work featured 7-year-old Joseph sitting atop a stone lion in an overgrown garden on the campus of Pittsburgh’s Chatham College, wreathed in ivy and holding a branch aloft against a backdrop of trees and a distant cityscape. Koerner detailed all this in an Instagram post and subsequent interviews.

The painting, called “Joey as Hercules,” exemplified Henry’s realism style, but the final work omitted something Joseph felt was important to the story of its creation: When posing for the original drawing at age 5 or so, he recalled: “As I was sitting there, all of a sudden I saw a couple of cicadas crawling up the rocks.

“I kind of shook and had to be convinced that they weren’t all over the place. It was such a mixed experience of horror and fascination of these insects. The noise in D.C. reminded me of first really noticing them crawl.”

Sparked by the recollection, Koerner reflected on the connections between memory and art-making. He thought of the technical term “imago” — which is defined as both the final form of an insect and an idealized mental image of another person or the self — and how it applied to his experience.

“An image exists, like a painting, but it holds other images that lay dormant,” he said.

The past that had been dormant for Koerner was the memory of the cicadas while sitting for his portrait. For his father, it was the memory of his childhood in Vienna prior to his immigration to the U.S. and the outbreak of World War II in Europe. The Koerner family split their time between Pittsburgh and Vienna, and as a child, Joseph accompanied his father on walks in the two cities. Father and son painted together on their outings, but the elder Koerner would often notice young Joseph making a small gesture and corral him (often unwillingly) into posing for a work.

“My father’s method was, generally, to ‘find’ what he termed his ‘motifs’ out in the world,” said Koerner, who explored his childhood and family experiences in a 2018 documentary called “The Burning Child.” These motifs “were representations of some painting-worthy subject in a somewhat traditional sense.”

In the documentary, Koerner explained that it was during those sessions that he realized his father’s paintings were based on forgotten or repressed memories of his childhood in Austria. Those experiences would often flash forth into a present-day scene, which he would then depict. “Joey as Hercules” was one such work.

In “Joey as Hercules,” Koerner’s father was interested in two things: his child play-acting “in a fun way as children will do,” and more broadly, the motif of children playing, said Koerner. “In my father’s first group of paintings painted in war-torn Vienna and Berlin, he homed in on children playing games in the rubble. It had to do with children being set apart from history and trauma in a wonderful but also unsettling way.”

The importance of understanding an artist’s intentions and taking into account the conditions under which they work stayed with Joseph Koerner. He came to see “Joey as Hercules” and many of his father’s paintings as a kind of collaboration between artist and model, father and son — “a coming together of two stories,” he said.

“I know that my father’s backstory of the painting is different than my backstory. He didn’t notice the cicadas and he wanted me to sit in a very particular way with my shirt off. And I was afraid of the cicadas and didn’t like taking off my shirt.”

Following the D.C. trip, Koerner returned home to Cambridge and re-examined the painting, which now hangs in his own son’s bedroom. In the spirit of collaboration, he decided to cement his side of the painting’s history.

“Cicada year again,” Koerner wrote on Instagram below a shot of the work. “And several 17-year cycles ago I posed for this while adult cicadas — the adult is called an ‘imago’ — crawled their way up the cement pedestal to my bare feet.”

Koerner challenges his students to ask similar questions about ownership and storytelling when studying any work of art or architecture. It’s a fundamental part of the fall course “Humanities 20: A Colloquium in the Visual Arts,” team-taught by five faculty as a wide-ranging introduction to the discipline.

Students in the course, which launched last fall, study diverse images and material objects, including the Parthenon, the illustrated Bhagavata Purana Hindu religious text, and Max Beckmann’s 1927 painting “Self-Portrait in Tuxedo,” in the classroom and in interactive “looking labs.” This fall, faculty and teaching fellows plan to conduct the looking labs in the Teaching Gallery at the Harvard Art Museums.

Unlike a traditional, chronological approach to teaching about art and architecture, “We are introducing students to a large range of visual images and asking questions like: How is it that we come to these artifacts? What stories do we write about them? How do they relate to big ethical questions about time, history, and justice?” said Koerner. “Is a painting an artist’s story, the sitter’s story, or is it a story that each of us has to make up in the future?

“As an art historian I learned that the artist doesn’t have, as conscious, articulate intention, the last word on their work,” he said. “Works get completed by their interpreter, sometimes long after they are made, and cicada-like, they take time to come to light.”