A time of change, a longing for home in Vienna 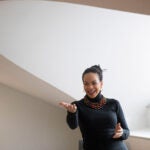 Home is not only where the heart is. Home is where we feel safe, a sanctuary where we can express ourselves and act on our deepest dreams. That, according to Professor Joseph Leo Koerner, is what makes interior design both fascinating and revealing.

For Koerner, Harvard’s Victor S. Thomas Professor of the History of Art and Architecture, home and homemaking provide a unique window on Vienna at the turn of the 20th century, a time of unprecedented change that helped shape modern Europe. His artistic and scholarly studies form the basis of the Vienna Project, which has included lectures and courses and will culminate in a screening of a current cut of his documentary “The Burning Child” on Wednesday at 6 p.m. at the Harvard Art Museums.

The 20th century, explains Koerner, began in Vienna as a period of unrivaled creativity. The ancient imperial city was in the throes of modernizing through both groundbreaking aesthetics, starting with the Vienna Secession artistic movement of 1897, and psychoanalytic theory, pioneered by Sigmund Freud’s book “The Interpretation of Dreams” in 1899. The work of Secession artists such as Gustav Klimt and Egon Schiele and architects like Adolf Loos saw these ideas dovetail, as the interior of the mind — the subconscious — became fertile ground for art and interior design and reflected emerging concepts of creativity and mental health.

However, within a few decades, these creative ideas ran up against rising fascism and anti-Semitism, and the Jewish identity of many scholars, theorists, and artists became a cudgel to be used against them. When Hitler entered Vienna in 1938, says Koerner, he was greeted with enthusiasm by many Viennese. The Jewish and Gentile populations’ ideas of home — of origin and identity — were cast in deadly opposition.

This tension forms the basis of Koerner’s film, which is still a work in progress. Based in part on the story of his own father, who fled Vienna in 1938, it begins with a beleaguered people who seek safety. “On the most fundamental level,” said Koerner, “if you live in a conflicted and unstable political place, the place which you cultivate is your home. You learn to play piano, and you imagine you’ll be safe within those four walls. All the people I document, including my grandparents, thought the same thing.”

Calling his film “the story of Jewish Vienna,” Koerner said he was motivated by a painting his father made from memory, depicting the home he had left behind. At the center of his film is a “personal journey through the city, talking to archivists to find out what happened to that one room that the painting shows, what happened to that apartment that my father had to leave — this one painting that he created that sits in my own home.”

The film incorporates other stories as well, including that of the Jewish family’s Christian neighbors and that of a shoemaker, who finds what he believes to be a ritual well. For all of these characters, concepts of safety and sanctuary — of home and identity — come into conflict. “Interiors,” said Koerner, are the focus, “not as they relate to the outside landscape, or even the urban hustle-bustle, but also as a capsule against conflicts — conflicts that are literally 3 inches away” on the other side of an apartment wall.

The title refers to a dream documented and analyzed by Freud. In it, a mourning father, who falls asleep while sitting in a vigil by his child, envisions his child coming to him with the horrifying message, “Father, I am burning.” The father then wakes to find his child’s corpse is indeed on fire. “The dream is terrible,” said Koerner, describing it as a dream about generations, “about fathers burying their sons. “The dream is also about a waking world that’s more nightmarish than the dream.

“In one way, the film is the story of Viennese interior design, and I broaden that to include the Viennese understanding of the interior,” said the filmmaker. “I’m interested in that as the story of homemaking, a dream about how to be at home in the world.”

The Vienna Project is funded by a grant from the Andrew W. Mellon Foundation.