The woman who kept running 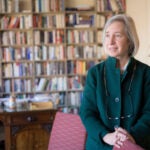 When Joan Ullyot began running at the age of 30, four years after graduating from Harvard Medical School, the conventional wisdom held that women couldn’t — and shouldn’t — run long distances. But Ullyot, who died on June 19 at age 80, would soon prove these assumptions false. From her first major competition, the 1971 Bay to Breakers race in San Francisco, to her final Boston Marathon, in 1996, she blazed a trail for others to follow, including as the author of the 1976 book “Women’s Running” and as an advocate who helped persuade the International Olympic Commission to introduce a 3,000-meter race and a marathon for women at the 1984 Games.

Suzanne Walmsley ’91, who ran Crimson track with Ullyot’s sons, Ted ’90 and John ’91, had a chance to meet their mother while serving as director of youth and community engagement for the Boston Athletic Association. In a conversation with the Gazette, she reflected on the legacy of her hero. The interview was edited for clarity and length.

GAZETTE: How did Ullyot change running?

WALMSLEY: She normalized running for women and made factual presentations to show that it wasn’t harmful — that it was actually beneficial — for women to run. She also set an example personally. She won 10 marathons outright and placed many times in the top 10. In the 1984 Boston Marathon, when she was in her 40s, she ran a 2:47 [winning the Masters Division]. Her times hold up: If you look at recent Olympic trial standards, they weren’t that far off. She showed that with careful training and steady progress, you could achieve faster times.

GAZETTE: Can you talk about the reaction to “Women’s Running”?

WALMSLEY: It gave women a starting point. She adjusted it as she learned, as all good scientists do, and came out with a revised version later. But she really did break women’s long-distance running down into an achievable plan, based on physiology and training methods for how to build up to distance and get faster and work off of what you’ve done before. Not too many women were thinking of running a marathon then, and the idea of lacing up your shoes and going out the door … what do you do then? She was able to spell that out for people and make it accessible.

GAZETTE: What were some of the myths she debunked?

WALMSLEY: It all tended to come down to women’s fertility — your ability to have children if you were too skinny or were running too many miles and, later on, the idea that running while pregnant was dangerous. She was able to look at the physiology and challenge those assumptions where they didn’t hold up.

GAZETTE: How have Ullyot’s achievements affected your life as a runner?

WALMSLEY: By the time I came along, I could almost take for granted some of the things that were available to me because of the things that she had done to make them available. I started running in 1983, right around the time that the marathon became an official event at the Olympics for women, and seeing Joan Samuelson — or Joan Benoit, as she was at the time — win was enormous for someone who was a young runner. We don’t have a Joan Benoit if we don’t have Joan Ullyot. I was a distance runner and having that ability to dream — to realize that anything is possible — because they had opened this doorway for women was enormous.