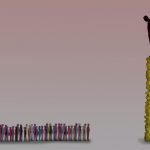 Have you ever cashed your paycheck at a payday loan store?

I have. In high school, I worked at the Boys and Girls Clubs of Greater Milwaukee as a part-time program assistant. Like many residents in my working-class African American community, I was unbanked. Every two weeks, instead of directly depositing my minimum wage earnings into an account at the local credit union, I hopped on the 23 bus for a quick ride to my neighborhood Check ’n’ Go. The first time I did this, I was in for a jarring revelation. After anxiously waiting my turn in line, I dashed to the bulletproof teller window and eagerly signed over my check to the gray-haired woman behind it. Once she finished counting out my $238 return, I froze, a bit confused. “Excuse me, I think you made a mistake,” I said. “What?” she asked, without shifting her gaze from the cash register she had begun pecking. “I’m missing some of my money,” I replied, my voice slightly elevated. She lifted her eyes, grabbed a pen, and pointed to a long list of check cashing fees located directly behind me, before hollering “Next!”

Sometimes, I imagine this is what it must be like for the 1.2 million Black children raised in two-parent families who are living at or near the poverty line. They likely feel the same sting of disappointment when they are unable to cash in on the full benefits of living in a two-parent family. Instead, they are slammed with unexpected fees that deprive them of realizing the total gains of growing up with both parents. They pay a penalty because they are poor. And they are more likely to be poor because they are Black.

Rather than the two-parent family being the great equalizer that most Americans imagine it to be, Black children from low-income, two-parent families find themselves in the same position as Black children growing up with a single parent. This is what I found in my forthcoming study in the journal Social Problems. In it, I explore the differential returns to living in a two-parent family for Black youth’s academic success. Drawing on a nationally representative sample, I found that there were no differences in the earned grades, likelihood of grade level repetition, and rates of suspension between Black youth from low-income, two-parent households and their peers raised in low-income, single-parent households. However, Black youth from well-off, two-parent families earned better grades, were less likely to repeat a grade, and had much lower suspension rates.

Why do the benefits of a two-parent family not extend to Black youth from low-income communities?

To understand this, we need to think of the family structure like a car and take a look under the hood. In order to get any vehicle moving, you need a few essential parts like an engine and a transmission. In the same way, resources like money and good parenting are essential to the vitality of any family. In fact, research indicates that differences in household income between two-parent and single-parent families explain up to two-thirds of the gap in educational attainment.

By definition, Black children in low-income, two-parent households face significant financial hardship. Additionally, their parents are often beset by unpredictable work schedules, lack of access to high-quality childcare, and racial microaggressions that make it difficult for them to provide their children the consistent warmth, monitoring, and supervision that they desire. These challenges keep many Black children from reaping the rewards of living in a two-parent family.

Nonetheless, the single-parent family is routinely indicted as a fundamental cause of Black plight. In fact, compared with a poor white family, a poor Black family seeking financial support is more likely to be offered counseling via a government “Healthy Marriage Initiative” program, instead of receiving direct cash assistance. The untenability of this perspective on Black struggle becomes apparent when poor Black youth from two-parent families still cannot succeed.

To be clear, I am not suggesting that there are no benefits to living in a two-parent family. My point is this: If the two-parent family is the vehicle that is expected to transport children to success, then we should be deeply concerned that the benefits of this family structure are not available to all. We should be equally disturbed by the notion that children’s opportunities in life should be decided by the type of family they are born into. It does not have to be this way.

What we need are policies that alleviate financial hardship and facilitate good, consistent parenting. President Biden’s proposed American Families Plan is an example of such a policy. Through expanding tax credits and subsidies, this plan would offer direct financial support to low- and middle-income families in a way that dramatically reduces poverty and places high-quality childcare within reach, smoothing the path to success for millions of children. Broad, generous policies such as this hold promise for helping us put inequality of opportunity in our rearview.

Christina Cross (@christinajcross) is a postdoctoral fellow and assistant professor (beginning 2022) in the Department of Sociology at Harvard.