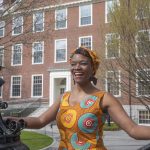 Fueled by a love of education and creativity

Tania Dominguez-Rangel ’21 has long been concerned with representation.

A DACAmented graduating senior born in Mexico City, Dominguez-Rangel grew up in the Atlanta suburb of Roswell, Georgia. While she had long been aware of public discourse around undocumented immigrants, the realization that few of the stories in the media were coming directly from the affected population came fairly recently.

In December 2019, the Undocumented Filmmakers Collective responded to a Netflix-backed documentary series, “Living Undocumented,” with an open letter. In it, the collective questioned the series production methodologies, noting that no undocumented filmmakers were part of the crew. “Our undocumented community does not need any more empathy through films created for mainstream American audiences,” they wrote. “What we need is genuine solidarity so that we can thrive by creating change from within our own communities — and in our case, creating media about us, for us, by us. What we aspire for are representations of our community that do not just dwell in the trauma, but also celebrate the complexities of our human experiences.”

Outside of her coursework, Dominguez-Rangel has worked around Latinx empowerment and representation, whether as social chairman and president of Harvard-Radcliffe RAZA or as social media lead for the Latinas Unidas LEAD (Latina Empowerment & Development) Conference and for the Latinx literary journal Palabritas. More recently, she has brought a Latinx perspective to the online magazine Her Campus, for which she writes about the arts, culture, and entertainment as a Harvard campus correspondent. At times, these activities have intersected, such as when she covered the LEAD Conference for Her Campus, or when the owner of the East Boston specialty retailer La Oaxaqueña — which she wrote about — became a vendor for the Chicanx conference RAZA organized with other northeast-area colleges.

At Harvard, “I had been looking at representation a lot in my work, especially with Latinx folks nationally, internationally, and also locally in Boston,” said Dominguez-Rangel, who has a joint concentration with the departments of Romance Languages and Literatures and of Art, Film, and Visual Studies and is in the Mellon Mays Undergraduate Fellowship Program.

The open letter was further inspiration for Dominguez-Rangel’s two-part senior thesis: an essay and a short film.

“I read this letter, and it talked about inclusivity of undocumented individuals in the film industry,” she said. “So my essay analyzes and surveys different films about undocumented, adolescent people growing up, and the production process behind that — so, for example, if a film was about a child crossing the border to find his mom, like in ‘Under the Same Moon,’ who were the actors, how was it marketed, and how does that influence, or is [it] influenced by, the politics in the U.S. or Mexico?”

For the film, it was important to Dominguez-Rangel to work with cast and crew members who were all undocumented or formerly undocumented children of immigrants. “The biggest thing is that I wanted to work as a collective with them in this project,” she said. She shot the film  — which is loosely based on her upbringing and examines tropes from the movies she studied for her thesis — at her parents’ home in the Atlanta exurbs, where she’s lived since the pandemic struck last spring, with all local actors. “It turned out very different from my script, but was very rewarding.”

Her thesis also brought her to other rewarding work — this time as a Radcliffe Research Partner, undertaking research for the writer Héctor Tobar, the 2020–2021 Lillian Gollay Knafel Fellow at Harvard Radcliffe Institute. Tobar is writing a book about the effect of the anti-immigration movement on American society, and she assisted him by surveying  publications, film, and social media for stories that reflect the modern Latinx immigrant experience.

“Héctor’s project was basically right on par with my thesis,” says Dominguez-Rangel.

In a coincidence, after collaborating solely over Zoom for a couple of months, Tobar and Dominguez-Rangel’s paths crossed in real life. Tobar was researching an article about the political opinions of Latinx immigrants, and Dominguez-Rangel connected him with her own father. Tobar traveled cross-country in the course of his reportage, and they met during a stop in Georgia. “My dad has a lot of things to say, but no one really to tell them to besides me — so just for him to share the story with somebody else” was meaningful, she said.

Post-Harvard, Dominguez-Rangel hopes to continue bringing attention to immigrant stories. After a gap year, during which she hopes to work in the arts, she will pursue an M.A./M.F.A. at Pacific Northwest College of Art, in Portland, Oregon, which has a dual program in critical studies and visual arts. “For me, the two things are very intertwined always,” she said, and her Harvard film studies have given her the resources to bring to life work she’s been thinking about for some time.

“In general, my art is rooted in storytelling,” she says. “All of it has been rooted in my experience.”

But for Dominguez-Rangel, it’s about more than just visibility—she hopes that bringing these representations to the public can help effect change: “That’s something I’ve found in my studies. Visibility goes a long way, but action needs to take precedence after that.”