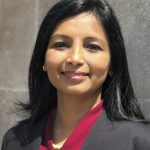 With two kids at home, an active job hunt, and a dissertation needing to be written, then-Harvard Law School student Xiaoqian Hu needed a quiet place to get her work done. That’s when Sally Falk Moore, the Victor S. Thomas Professor of Anthropology Emerita, left the key to her own home under the doormat and said, “Write it in my house.”

“She just knew how important a tranquil environment was for the liberation of my mind,” Hu said, recalling the moment.

It wasn’t the first time Moore, who died May 2 in Cambridge at 97, had made such a gesture either, she said.

“I got married right before my doctorate and we were looking for a venue to host the wedding. Sally said: ‘Well, if you have a small crowd, you can use my home,’” said Hu, S.J.D. ’19, who is now an associate professor of law at the University of Arizona. “Sally was like a family member — and she treated me as such. She always put people first.”

According to colleagues, former students, and family who also knew her poise, razor-sharp critiques, and intellect as one of leading figures in legal anthropology, this was Moore — always generous, kind, and fiercely loyal.

“I don’t know whether she realized it or not, but she was the embodiment of kindness,” said Michael Herzfeld, Ernest E. Monrad Research Professor of the Social Sciences, Emeritus. “She had an infectious laugh, a wry wisdom about everyday matters, a healthy skepticism about the law and lawyers, and an equally strong determination that students who seriously wanted to become legal anthropologists should do doctorates in both. … It is hard to believe that silvery laugh won’t be heard again in our building.”

Born in 1924, Moore was raised in New York City, where she attended Barnard College and was trained as a lawyer at Columbia Law School. After a brief stint working at a Wall Street law firm in 1945, she became a staff attorney at the International Military Tribunal at Nuremberg during the investigation of Nazi war criminals in 1946. That experience influenced her to venture into anthropology to study legal and political systems and how to attribute individual responsibility for the actions of a society.

In 1957, she received her Ph.D. in anthropology from Columbia University and did her major field work in Tanzania, studying the interactions between Indigenous, colonial, and post-colonial social and legal systems. She published extensively on cross-cultural, comparative legal theory. Her papers and books are still widely read and the concepts and approaches she developed have been largely upheld and have helped found theories and revise understandings of law, such as customary law.

“She helped to strengthen a tradition in which we look less at the literal prescriptions of formal law and more at the process through which they are interpreted — often very creatively, and always with respect to local values, needs, and conditions,” Herzfield said.

“I don’t know whether she realized it or not, but she was the embodiment of kindness.”
— Michael Herzfeld

Before joining the Harvard faculty in 1981, Moore taught at the University of Southern California, University of California at Los Angeles, and Yale University. At Harvard, she was dean of the Graduate School of Arts and Sciences from 1985 to 1989, and she and her husband, David served together as faculty deans of Dunster House. She often taught a class in anthropology and law at Harvard Law School during the ’80s and ’90s, and counted Barack Obama as a student (though admitted to having no memory of him in the class). In 2010, she was appointed affiliated professor of international legal studies at HLS.

Moore accrued a number of awards and honors during her career, including the Kalven Prize from the Law and Society Association and the Huxley Memorial Medal from the Royal Anthropological Institute, while also being selected to give keynote lectures such as the Haskins Prize Lecture at the American Council of Learned Societies.

Kristin Bergtora Sandvik, S.J.D. ’08, admitted that meeting Moore “was like a legend leaping from the pages of my textbook,” but said her idol displayed incredible humility and a fierce dedication to helping her students succeed, even if they required a strong push. That edge served Moore well in her career, Sandvik noted.

“Sally was an elegant woman: a classical beauty and with exquisite manners,” she said. “Given the challenges of being a woman of her generation in the legal world and in academia — someone hard-nosed, strong-willed, and determined — it would be unfortunate if she went down into history as delicate.”

Many former students shared similar sentiments and remembered moments when Moore, who taught well into her late 80s and advised students into her 90s, offered sage wisdom when they needed it most.

“During the stage of dissertation-writing and job-searching, when I was hit with anxiety and the stress of uncertainty, she invited me to coffee at her place and told me how she had enjoyed reading my draft chapters to boost my confidence,” said Ying Xia, S.J.D ’20, who was Moore’s final formal advisee.

When Mekonnen Firew Ayano, LL.M. ’09, S.J.D. ’16 came to Harvard from Ethiopia in 2008, he wasn’t sure he would be able to write academically about the ins and outs of rural land titles in the African nation. It was Moore who made him believe he could.

“She gave me perspectives that that made me realize that I had valuable experience,” he said. “All I needed was the vocabulary and framework to present it for any kind of audience.”

Like she did for many others, Ayano said, “She believed in me in situations and in times when I had my doubts.”

Moore is survived by her two daughters and her two grandsons.