Engineering a startup by degrees 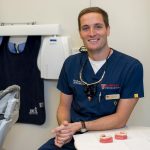 His football days behind him, Michael Mancinelli is looking to tackle new challenges

When Michael Mancinelli arrived on campus in the fall of 2019 to begin his journey through the M.S./M.B.A. program, it almost felt like he was coming back home.

Mancinelli graduated from Harvard College in 2015 with a degree in electrical engineering. Not only did he come back to campus to earn a master’s degree at the Graduate School of Arts and Sciences (GSAS) — he moved into the same House he’d lived in as an undergraduate, Currier.

He and his wife, Jessica, have been resident tutors, advising students about career choices and helping them apply to graduate school.

“I didn’t even hesitate when I saw the opportunity to come back to Harvard for graduate school. And it has been fun to be back in Currier House,” Mancinelli mused. “But it has been even more satisfying to help students — to not be the one receiving the advice anymore, but being able to give that advice back and help the students along.”

Mancinelli’s initial interest in science and engineering was sparked gazing at the night sky above his Colorado home.

He opted to concentrate in electrical engineering as an undergraduate because it seemed like a more practical outlet for his curiosity but couldn’t resist studying astrophysics too. Harvard was his ideal school, he said, because he could study both subjects while playing football.

The 6-foot-4 Mancinelli played all four years and started at left guard for the Crimson.

Some of his fondest memories were forged on the gridiron. The Crimson went undefeated during the 2014 season, and the team’s final game — against Yale — was broadcast on ESPN. The game ended in a heart-pounding shootout that went down to the wire.

And while some of his teammates from that undefeated season pursued professional football, Mancinelli had different post-graduation plans.

But when he met Jessica Ingrum, the lovestruck teenager soon made new priorities. The two started dating and both decided to come East for college — Jessica studied applied math at Tufts University. Between their graduation ceremonies, Mancinelli proposed.

Excited to begin their lives together, the high school sweethearts headed back to Colorado, where Mancinelli started an engineering job at Ball Aerospace.

“Six months after graduation, I was diagnosed with non-Hodgkin’s lymphoma, completely out of nowhere,” he said. “I had gone in for a physical, but I thought I was invincible, being a 22-year-old who had just played football for four years in college.”

The couple put their wedding on hold and Mancinelli took time off work for cancer treatments. He initially beat lymphoma, but the cancer returned a year later. Mancinelli had a stem cell transplant that set him on a path to full recovery. And he’s been cancer-free ever since.

In the midst of those challenges, he still enjoyed the opportunity to flex his engineering muscles at Ball Aerospace.

As a member of the tactical mission analyst group, he and his colleagues created models to assess the viability of new technologies, like communications and radar systems.

When one of those novel devices seemed particularly promising, Mancinelli joined the entrepreneurial team that worked to develop it — performing lab testing, building a prototype, and flying around in a modified airplane conducting field tests.

Bitten by the entrepreneurship bug, Mancinelli decided to enroll in the M.S./M.B.A. program, offered jointly by the Harvard Business School and GSAS through the Harvard John A. Paulson School of Engineering and Applied Sciences, to delve deeper into the world of startups.

“I was torn between getting a master’s in engineering or an M.B.A. and, fortunately, Harvard offered me the opportunity to get both,” he said. “When I found out the program was entrepreneurially focused — all about solving audacious engineering problems — I was hooked.”

After his first year in the program, he took on a summer fellowship at the Arthur Rock Center for Entrepreneurship, where he joined forces with a classmate who was working on a startup that aimed to create a workplace feedback platform. The web app sought to fill the gap between a pulse check and a performance review to increase the amount of feedback in the workplace.

Later, he switched gears and joined another startup, Human Dynamics, this time as CEO and co-founder. The company sought to develop a way to precisely control drones so they could perform dangerous tasks typically done by humans at heights, like bridge repair.

While he and his co-founders poured their hearts into the project, they ultimately decided to close Human Dynamics a year later.

“It was a very good experience, though. Working on the startup was really time intensive and there were some really stressful times, but because I was doing that, I was able to take concepts I was learning in both my engineering and business school classes and apply them to this business, sometimes the very same day I learned them,” he said. “So this allowed me to bridge the gap between theory and practice and gave me this really cool, fully-fledged experience that I am hoping will set me up for success.”

Looking to the future, Mancinelli hopes to apply those entrepreneurial skills in a new startup. He has developed a deeper sense of what it takes to launch a company and is now even more convinced that the world of entrepreneurship is the right place for him.

“I really love working on highly motivated teams. I’ve already gotten a sense from the startups I’ve worked on that there is an energy there that reminds me a little bit of the football locker room, where everyone is united around a very clear mission,” he said. “I feel like I can fit into that mentality and really move the ball down the field and help people execute. The opportunity to make an impact is the biggest thing for me.”