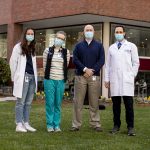 Recent research links certain cells that line the human airway with different infant diseases. The work, which is published in Cell Reports and was led by investigators at Massachusetts General Hospital (MGH), could lead to new prevention and treatment strategies for these conditions.

The human airway — from the windpipe to the lungs — is lined with epithelial cells, including a type called pulmonary neuroendocrine cells (PNECs) that communicate with the nervous system and secrete different factors and hormones. Increased numbers and clusters of PNECs have been observed in various breathing-related illnesses, but the cells’ roles in health and disease are unclear. To better understand PNECs and their effects in the body, researchers analyzed lung and airway tissues from humans and mice.

The scientists were surprised to find that PNECs are much more varied than previously described. In fact, it appears that the airway harbors three distinct types of PNECs. Some PNECs express a protein called tubulin beta 3 class III (TUBB3), and this protein is required for protrusions involved in communication between the cells and their environment. Therefore, PNECs with and without TUBB3 may have different sensing mechanisms. Also, higher numbers of certain PNECs were present in autopsied tissues from children who had died from diseases such as sudden infant death syndrome and neuroendocrine hyperplasia in infancy, a rare lung disorder of unknown cause.

“We are currently studying how different subpopulations of PNECs differ in their function,” says senior author Xingbin Ai, a pulmonary disease specialist in the Department of Pediatrics at MGH. “We hope to leverage this knowledge for future development of markers and treatment strategies for infant diseases that involve abnormalities in these cells.”