Is an artist obliged to stand up for injustice and inequity? 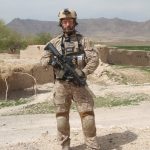 Animal encounters on the battlefield

Virtually Oberon play focuses on three hip-hop artists of different races, genders after the police killing of a Black teen

Who is responsible for speaking up about injustice? Does having a platform oblige an artist to take a stand? These are the questions posed by “Hype Man” by Elliott Norton Award-winning playwright and poet Idris Goodwin. The newly hybrid play-film, streaming as part of Virtually Oberon, follows three hip-hop artists as they wrestle with these questions from their rehearsal space to the stage and the streets and back again, against a backdrop of racist violence and inequality.

White rapper Pinnacle (Michael Knowlton) and his Black hype man (Kadahj Bennett) are readying for their debut television appearance when their MC, Peep One (Rachel Cognata), the newest member of the trio and a woman who identifies as mixed-race, bursts in with news of a police chase. When the three learn that a Black 17-year-old has been shot and killed, their friendship — and shared professional journey — is shaken.

The work clearly feels of the moment, arriving amid the high-profile trial of former Minneapolis police officer Derek Chauvin, who is accused of murdering George Floyd in May of last year. The dark irony, Goodwin explained, is that this piece had been in the works for years and was debuted by Company One in 2018.

Speaking during an American Repertory Theater (A.R.T.) “Lunch Room” conversation on Tuesday, Goodwin talked about the genesis of “Hype Man,” the third of the “break beat” plays (following “How We Got On” and “The Realness”) that he’s been writing for the last 10 years. Although both of these earlier works are also set in the hip-hop world, in the wake of Trayvon Martin’s killing in 2012 “and so many others,” he said, other questions began to arise. Goodwin recalled seeing rapper/producer David Banner at the 2014 BET Hip Hop Awards ask, “Where were all the white rappers standing when Mike Brown got gunned down?” The question had resonance for Goodwin, who professes a love of ’90s hip-hop. “Hip-hop is so much about representation,” he said. “Where you come from, about you and yours. But there is a line: It’s a very Black art form, but it is largely controlled by non-Black people.”

As Pinnacle, Verb, and Peep discover, those lines cut across — and can sever — even old friendships. “We are in a moment in America where we cannot hide anymore,” noted “Hype Man” cinematographer and co-director John Oluwole ADEkoje during the midday conversation. “There is no neutral, and it is our job — specifically white folks — to dismantle this white supremacist notion, system,” added Shawn LaCount, the play’s director and co-director of the hybrid production, who identifies as white.

Thanks to the presence of Peep, the play also brings up issues of sexism and misogyny in hip-hop. “Why is it OK for him to say all this horrible stuff about women, but he can’t say something about justice?” Peep asks Verb in the play. “The word of the day of every day is intersectionality,” Cognata said in an interview. “And how we live at these crossroads of different identities.”

The newest and youngest member of the group, Peep is “still finding her journey of what that means being a woman in this male-dominated space,” Cognata explained. “She is watching Verb and Pinnacle have these strong opinions about a very specific subject. When she substitutes in something else — gender — it’s hard for people to see” that the issues are the same.

“We see this now in the Black Lives Matter movement,” she continued. “As soon as you say Black trans lives matter, you have divisions. You hear ‘We don’t want to divert attention from what this movement is really about.’ But that is an intersection that people live at. That’s a very relevant and integral piece of the play.”

The newcomer to the trio, Peep also inadvertently steps on some fault lines — sparking a long-lasting dispute between the two men and acting almost as a surrogate for the audience. It’s a role Cognata savors. “Some people might identify with Verb’s character, and some people might find some of the points made by Pinnacle more their experience. Peep is really trying to listen,” she said. “She’s really trying to suss out all of the layers and all of the aspects of a very complicated system.”

Having an on-stage stand-in for the audience is all the more vital because of the current production’s online status. Adapting to a streaming production after performing live was “very strange,” said Cognata. “A lot of the energy of the show was really participatory, especially when we went to Oberon [in 2019]. So this was a very different type of energy. Because we’ve done this show for so long, we know the energy that we want a certain moment to have.”

As ADEkoje detailed, it was also in some ways freeing. “I remember watching this show — it stayed with me. I want to cinematically grab that same energy.” With the addition of animation and split screens, he was able to incorporate film effects into the straightforward play. “The goal was to bring people onstage and put them in the middle of the stage,” he said. “Even though you’re trying to get the same feeling, the way you get there is different.”

“Having those conversations in the room with filmmakers and theater people, I always felt there were always secrets that each department had that if only we could talk to each other, we could expand each other’s work. We can make theater better, or we can make film work better.”

For Goodwin, the transition makes sense. “I was really built for this moment in a lot of ways,” he said. Referring to his artistic experience in poetry and hip-hop as well as theater, he added, “I’ve always been a transmedia person.”

For Goodwin, such future productions are inevitable. “It really hurts my heart a lot that the further away I get from when I wrote this play it is unfortunately more apt,” he said. “We produce ‘The Diary of Anne Frank’ so we don’t ever go back there, so that part is kind of sad.”

Company One’s “Hype Man: a break beat play” is available via on-demand streaming at 7:30 p.m. Thursdays through Saturdays and 4:30 p.m. Sundays, with a final performance 7:30 and 11:59 p.m. on May 6. For ticket and streaming information, visit the website.