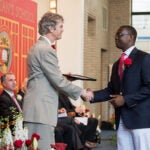 At a Meeting of the Faculty of Arts and Sciences on Feb. 2, 2021, the following tribute to the life and service of the late Thomas Crombie Schelling, was placed upon the permanent records of the Faculty.

Thomas C. Schelling taught at Harvard for 32 years, in the Department of Economics and in the Kennedy School. More than any other thinker, Schelling influenced the West’s conceptual approach to the nuclear dangers after World War II. He was an outstanding economist, but ordinary disciplinary boundaries could not contain his fertile mind. Schelling’s contributions interwove theoretical understanding and policy-relevant applications. He laid bare the underpinnings of such problems as nuclear deterrence, racial segregation, smoking, and climate change. Schelling eschewed mathematical expression; he wrote in plain but elegant English. He often developed ideas using examples from everyday life and then applied them to global issues. For instance, he illuminated the architecture of threats and promises first within the family and then in international affairs.

Born in Oakland, California, Schelling studied economics at Berkeley, A.B. 1944) and then Harvard, Ph.D. 1951). Like several eminent contemporaries, he worked with the Marshall Plan in Europe and in the Executive Office of the President in the Truman administration. After brief stints at Yale and at the RAND Corporation, he returned to Harvard in 1958 as a professor of economics. That year, along with Robert Bowie, Henry Kissinger, and Edward Mason, he founded the Center for International Affairs (today the Weatherhead Center for International Affairs). In 1969, he joined Graham Allison, Francis Bator, Frederick Mosteller, Richard Neustadt, Howard Raiffa, and Richard Zeckhauser to create the modern Kennedy School. He served as the Lucius N. Littauer Professor of Political Economy at Harvard from 1974 until 1991, moving from Harvard to the University of Maryland. Among Schelling’s many distinctions, he served as president of the American Economic Association in 1991 and, in 2005, was awarded the Sveriges Riksbank Prize in Economic Sciences in Memory of Alfred Nobel.

In the language of modern economics, Schelling was a “game theorist,” although he resisted that label for himself. The twin hallmarks of his approach were to distill the essence of a complex situation into a simple example and then to draw from that example original insights of broad generality. His 1960 masterpiece “The Strategy of Conflict” applied this approach to international relations, revolutionizing the field. The book was the foundation for a famous undergraduate course that he taught for years at Harvard.

Schelling emphasized that in any interactive situation, a participant’s set of available choices influences the decisions made by others; as Schelling put it, “What one player can do . . . affects what another player will do.” In particular, a player may be better off reducing his options: a bus driver who cannot access her fare box is safer than one who can. Similarly, Schelling argued, the United States should not have a nuclear arsenal vastly superior to Russia’s. If the Russians believed they would not survive an American nuclear first strike, they might be induced to launch first. Moreover, in dangerous settings with “multiple equilibria” (e.g., one in which if I think you are planning to attack me, then I should attack you, but if I think you have no such plans, then neither should I), Schelling underscored the importance of coordinating expectations and even sharing information that would normally be held secret; hence his proposal for the hotline ultimately established between the Pentagon and the Kremlin.

With such insights, Schelling developed the framework for avoiding nuclear war. Over decades, he helped create the instruments and institutions to prevent such a calamity. Thanks in no small part to his thinking and his effort, the nuclear genie has stayed in the bottle: no nation has exploded a nuclear weapon in conflict since 1945. The Nobel Prize committee wrote that Schelling’s insights proved “to be of great relevance for conflict resolution and efforts to avoid war,” and, unsurprisingly, he devoted his Nobel lecture to what he called the “nuclear taboo.”

As the threat of nuclear war receded, Schelling applied his characteristic approach to other big problems. He analyzed the damage, to both the individual and society, of smoking and other personal addictions. He anticipated future work in behavioral economics and psychology with his working assumption that often what appears to be irrational behavior of an individual is instead a reflection of different aspects of that individual’s self. He probed the problem of racial segregation and showed how easily it can arise even if people have only a tiny preference for their own race. In his final decades, Schelling’s principal focus was climate change. That concern was not new for him; in 1980 he chaired the Ad Hoc Study Panel on Economic and Social Aspects of Carbon Dioxide Increase, under President Carter.

Schelling was a celebrated and inspiring teacher, attracting generations of students to his method of analysis. His goal was to teach his students how to think. This he did by having them work logically through simple but subtle examples. He was also innovative pedagogically. In the late 1950s, he was already using experiments in his classes to illustrate the essentials of strategic interaction. Schelling was masterful in seminars. All present would eagerly wait for the final minutes, when he would expound in perfect paragraphs on what they just heard. Generously, he usually made more of the speaker’s ideas than the speaker had realized was there.

Schelling was married to Corinne Saposs from 1947 to 1991. After divorce, he married Alice Coleman in 1991. He remained active at the University of Maryland until his death on Dec. 13, 2016. Alice, his four sons from his first marriage, and two stepsons from his second survive him. Schelling’s world-preserving contributions have made us all survivors.