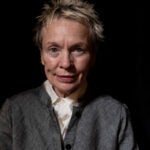 The great room depicted in the image from the late 1800s will be instantly recognizable to many: a vaulted 9,000-square-foot space of elaborately carved wood topped by a stenciled ceiling. In the photograph, the interior of the banquet room in Harvard’s Memorial Hall (today the first-year dining facility Annenberg Hall) is flooded by sunlight streaming through two giant stained-glass windows at the far end of the frame; decorative lights hang down from above, portraits and marble busts adorn the wooden walls.

It is a quiet vision of architectural splendor, capturing the interior of a building created to honor Harvard graduates who fought for the Union cause during the Civil War. A closer look reveals other details: men dressed in short jackets and long aprons standing, ready to serve, by rows of dining tables covered with white linen. All of the servers are people of color.

“When I acquired this I thought a lot about what it means to be a marginalized person at these institutions as a student,” said Makeda Best, Ph.D. ’10, the Richard L. Menschel Curator of Photography at the Harvard Art Museums last week during the virtual event “Troubling Images: Curating Collections of Historical Photographs.” “But I also recently began to think about the essential workers … and what does it mean to do service work, and to feel invisible but also to be part of a performance of power.”

When looking at difficult historical images, “It is our collective job to trouble those images, to interrogate the systems of power that enabled their production, collection, and display, for they are of course decidedly not objective, innocent pictures,” said David Odo, moderator of the discussion and research curator at the museums, which sponsored the event.

One group that has been deeply engaged in that work in recent years is the staff at Harvard’s Peabody Museum of Archaeology and Ethnology. In 2008, museum workers began exploring a project that would interpret and bring to the wider public the troubling images in the museum’s collection of formerly enslaved people, said panelist Ilisa Barbash, curator of visual anthropology at the museum. Known as the Zealy daguerreotypes, the images are of a group of people of African descent enslaved in South Carolina, commissioned by Louis Agassiz, a Swiss biologist and Harvard professor, in the mid-19th century in his attempt to prove his theories of polygenesis, which argued that human races were of different origins.

The resulting book, co-published by Aperture and Peabody Museum Press, features the perspectives of 23 scholars, artists, and students, and explores a range of issues, including the relationship between photography, power, and agency, and the difficult ethical questions raised by such troubling, complex images and their historic ties to slavery. It also examines the important ways in which the daguerreotypes are being reclaimed by contemporary artists.

“I write about how brilliant artists such as Carrie Mae Weems appropriated Zealy’s work and turned it into new and compelling artwork that has resonance beyond their original form and meaning,” said Barbash, who also helped edit the new volume. “All of that brings us back to the question of who really had the power in these daguerreotypes. Was it really Agassiz? I would say that for many of the writers, the mission was to restore power back to [the subjects] Alfred, Delia, Drana, Fassena, Jack, Jem, and Renty.”

Museum staff, added Barbash, are currently working on developing an exhibition featuring copies of the daguerreotypes, and thinking of ways to help the public engage with the sensitive works, including using contemplative spaces within the gallery where people who are struggling can recompose themselves, and hiring well-trained docents. “There are a lot ways one has to think about how to bring out this troubling material,” said Barbash.

“It is our collective job to trouble those images, to interrogate the systems of power that enabled their production, collection, and display, for they are of course decidedly not objective, innocent pictures.”
— David Odo

In her role as curator, Best said she is helping change the dehumanizing narrative of the many difficult images contained in the museums’ collection by acquiring works by contemporary artists who “are addressing that history of violence” with their works that “retain a sense of interiority, a sense of self for the sitter [in order] to deny that legacy of image making.”

Adding analytical text to accompany a historic photo can help add meaning to a picture, encourage the viewer see it in a different light, and push back against the dominant narrative, said Mark Sealy, director of Autograph ABP, a British-based photographic arts agency that promotes photography and film highlighting issues of identity, representation, human rights and social justice. “Rather than leaving them sometimes as these troubled spaces, we can reanimate them and put them to work in the kind of reverse of the thing that they were trying to do.”

In 2017, Sealy’s organization featured an exhibit of photos from the early 1900s taken by the missionary Alice Seeley Harris that exposed the forced labor, mass murder, and atrocities suffered by the Congolese at the hands of King Leopold II of Belgium. Sealy, who chose to display the earlier works alongside newly commissioned images by contemporary Congolese artist Sammy Baloji, said those kinds of juxtapositions are also critical in helping viewers understand the connections between the past and present moment. “The contemporary happens in that space, and that to me is a wonderful example of the good work that having this uncomfortable legacy can have for future narratives about understanding why it is that we are here and how we are in relationship to each other,” said Sealy.

But working with such charged images day in and day out can take an emotional toll. The panelists all admitted to struggling at times with the challenging subject matter, describing how they try to keep their emotions in check so they can continue to engage, and help others engage, with the material.

Barbash said she often has to “close up in order to bear working with such powerful images that depict such a degree of tragedy.”

“In some ways, I think that there is a kind of privilege to being numb to things,” said Best. “I have been looking at these images, and I don’t really have a choice. I have to understand what the experience of African Americans was. I also have to understand that a lot of work that I see now could not exist without these historical images, and what they are imagining and what they are trying to present would not exist either.”

Sealy called being a curator of such works in some ways “a very burdensome place.”

“It’s loaded with the inherent racism that’s behind it all. But at the same time, if we don’t look at this material, if we don’t encounter that space, then we won’t be facing the face that needs to be recognized.

“I do think generally all of this is an unfinished conversation, and I think that is the only way I can live with the insanity of some of the things that have been photographed,” he added. “The who, the what, the where, the why, and the when, I think it’s important and the rolling on of that story, the layer of the ingredients of it all, I really do think they are still to be discovered, because there needs to be different voices articulated in the meanings that are drawn out from all these images.”