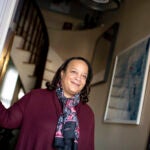 As part of the Peabody Museum of Archaeology and Ethnology’s reckoning with its history and collection of Native American remains, Jane Pickering, the William and Muriel Seabury Howells director, issued an apology earlier this year for the museum’s failure “to face the ethical and moral issues that undergirded the practices.”

The Peabody’s intent to reexamine its repatriation efforts and correct for missteps comes, in part, from the NAGPRA (Native American Graves Protection and Repatriation Act of 1990) Advisory Committee, founded a year ago by Claudine Gay, Edgerley Family Dean of the Faculty of Arts and Sciences, as well as the Peabody’s faculty executive committee and the University’s new steering committee on human remains.

The Gazette spoke with Philip Deloria, Leverett Saltonstall Professor of History, chair of the NAGPRA Advisory Committee, and past chair of the Repatriation Committee at the Smithsonian Institution’s National Museum of the American Indian, to learn about the importance of following both the law and the spirit of the process, what the Peabody has already accomplished, and its future plans.

GAZETTE: Could you give some context on what NAGPRA means for institutions such as the Peabody that have Native American remains and burial belongings in their collections?

DELORIA:  Passed in 1990, the Native American Graves Protection and Repatriation Act required institutions to prepare lists of human remains and of funerary objects that might have been buried with those remains, as well as sacred objects necessary to the practice of traditional Native religions and objects of cultural patrimony, those things held collectively by a tribal group. After preparing these lists, museums are required to consult with tribes that have possible cultural or geographical connections to those items. For human remains and associated funerary objects, the institution makes a determination as to whether they are culturally affiliated or culturally unidentified. Those inventories are submitted to the national NAGPRA office. That marks a next stage in the process of actual repatriation, which aims for the return of ancestral remains, burial goods, and cultural items to tribal nations. The law applies to federally recognized tribes, though state-recognized tribes sometimes end up partnering with them to facilitate the return.

GAZETTE: Why is important that the remains and the objects be returned to tribal nations?

DELORIA: Western traditions tend to have a sense that when a person dies there is no durable ownership over the body. In many traditions, including for Native peoples, ancestors and human remains carry far greater significance. The return of ancestral remains and funerary and sacred objects in many cases facilitates the ongoing practice of Native spiritual traditions and, indeed, the revitalization of those traditions in ways that are absolutely critical. I’ve been involved in a number of repatriations in which the return of sacred objects did not involve preservation in a tribal museum or something similar. Rather, they were going back into use as living things that were part of sacred practice and sacred ceremony. NAGPRA, in that sense, is about the continuance of the ongoing practice of Native life.

GAZETTE: What does the effort to fulfill NAGPRA requirements look like at Harvard and the Peabody Museum of Archaeology and Ethnology?

DELORIA: It’s important to know the context of the Peabody and of Harvard. The Peabody is an old museum, and Harvard has had an ambitious program of field research and collection, with very active directors, curators, and faculty. They acquired items from around the world, including human remains. More than 90 percent of the human remains come from archaeology contexts, mostly large archaeology expeditions supported by the museum during the late 19th and early 20th centuries. There is also a range of objects and remains that came from other institutions or were shared with other institutions. The Peabody, in other words, was an inheritor of other collections. The museum is really comparable only to the Smithsonian in terms of the number and the scope of objects and remains in its collections.

When NAGPRA was passed, the Peabody set out to comply with the law. Harvard hired a number of additional staff to complete the registers, summaries, and inventories that were part of the initial phase of the law. Because of the scope and the scale, Harvard needed some extra time, which was granted by the Department of the Interior.

Since those early years, Harvard has continued to have a dedicated staff of people who work constantly on repatriation. Tribes will come and consult with Peabody staff and then make repatriation requests. Those requests are received by the Peabody and more consultation takes place. The way that NAGPRA works is that the institution actually makes a determination about whether the tribe’s evidence meets the standard for affiliation and repatriation. If the answer is yes, then the museum publishes a notice of inventory completion (for human remains) or intent to repatriate (for cultural objects) and the tribe and the museum arrange for repatriation and transfer. If the institution does not think that the request can be sustained, there is a national NAGPRA appeals process that is run by the National Park Service.

In many cases, however, tribes and institutions remain in consultation as other lines of evidence are developed. A “no” is generally not a hard “no” but a continued exploration. The Peabody, on average, is working on about 50 cases a year — with the COVID year obviously being an exception. The museum always has ongoing consultations taking place and has different cases in different stages in the processes of the repatriation pipeline.

GAZETTE: What are some common challenges institutions run into when handling remains and their return to tribal nations?

DELORIA: In the early years of NAGPRA, many people thought that repatriation would not be particularly difficult. Just give it back. But it’s considerably more complicated. One common challenge arises when multiple tribal groups have overlapping claims or affiliations. And then, tribes had to build their own NAGPRA capacities. Imagine receiving a swarm of inventories and consultation requests all at once from scores of museums. That took some time. Then there are issues when it comes to state-recognized or other non-federally recognized groups, who oftentimes have interesting claims and pretty clear lines to items and objects. How does an institution navigate that question? Sometimes we run into issues on controlling interests in terms of the museum. Some of the collections in the Peabody, for instance, are shared with other institutions. Their assessments may not match ours.

Culturally unidentified human remains emerged as a major problem for institutions in the second decade of NAGPRA, between 2000 and 2010. Geographical determinations can sometimes be challenging, especially when you get into culturally unidentified remains, because there are many tribal groups possibly eligible and you need to consult with everyone. For example, at Yellowstone, the National Park Service works with 27 tribal nations with geographic and cultural ties to the area. Other areas of the country have even more.

“Harvard has worked hard for the past 30 years to implement NAGPRA. The size and the scale of the collections has made it a challenge unlike that faced by any other institution.”

GAZETTE: There have been of questions of how the University consults and works with tribes, and the number of remains that have been returned. How would the Peabody Museum respond?

DELORIA: One clarification is on numerical data. For instance, the Association on American Indian Affairs recently questioned the Peabody for only repatriating about 18.4 percent of the collection, but by our own calculation — based on the reported NAGPRA notices — the Peabody has actually repatriated about 34 percent of the collection. So, more than a third. Part of the misconception involved a very large repatriation that had joint ownership and thus complications in the reporting.

NAGPRA basically lays out what your processes and procedures are, so if you’re following the law — and the museum works hard to follow the law — you’re following a set of mandated procedures. The Peabody has always been quite willing to consult, and actually has very good consulting relationships with many tribes that have been developed over the years. Of course, it’s not always the case that when a tribe puts in a repatriation request, an institution says yes. That’s an unhappy outcome for the tribe, but that’s not the same as refusing to consult. A key part of the law is that the tribe has to make the case. Everyone involved needs to feel confident that ancestral remains and objects are returned to their proper place. You don’t want to return something and find out later that there is another potential claimant out there with a stronger case. That’s why consultation has to be broad, multitribal, and collaborative.

My own sense of things, developed over the past couple of years, is that Harvard is always aiming to be in compliance with the law. We are in compliance. But NAGPRA is hard. There’s no doubt about that. One of the lessons I’ve learned in being involved with repatriation since the mid-1990s is that NAGPRA is both a spiritual and sovereignty practice and an administrative process and procedure. It can be very frustrating, and it moves slowly, but I would say that the times when that bureaucratic process has gotten sloppy, it has led to bad outcomes on all sides. Getting it right is important; when a tribe comes with a claim, it matters that that claim is actually as good as it can possibly be. Doing this well is a sign of respect for the process, the practice, the tribes that you’re engaged with, and the human remains or objects that matter most. I’m a person who believes that these objects have life and spirit in them and that they need to be treated with respect. When you rush through a process, you are actually being disrespectful to the very things that you’re working with.

GAZETTE: The University has admitted past missteps concerning burial belongings. What were those and how are they being made right?

DELORIA: It centers around unidentified human remains and the return of funerary objects associated with those remains. Those are burial belongings, which are interred with an individual and are associated with that specific person. Under new NAGPRA regulations in 2010, these objects were recommended but not required to be returned when a museum repatriated unidentified human remains.

But when the new Museum Director Jane Pickering and Dean Gay constituted a Peabody NAGPRA Advisory committee in May 2020, the very first item on our agenda was this very issue. We agreed that retaining those funerary objects was not the right decision, and we have been making every effort to repair that mistake. Despite statements to the contrary, we had a proposal for a policy change ready in December and approved in early February to allow for the return of associated funerary objects. We’re currently planning outreach to previously affected tribes right now to reopen consultation on these burial belongings.

GAZETTE: What other changes do you expect going forward?

DELORIA: Harvard has worked hard for the past 30 years to implement NAGPRA. The size and the scale of the collections has made it a challenge unlike that faced by any other institution. But the museum is in a new and exciting moment where we’re imagining a refresh of our policies and practices. Every institution needs periodically to reassess itself and to maybe push the reset button on a few things.

Besides the NAGPRA committee, the Peabody has a very active and thoughtful faculty executive committee. And of course, many of us are participating in the new University-wide steering committee on human remains. I think there’ll be new policies coming out about research use, collections management, transparency on the website, and moving forward with repatriation. Simply put, we are striving to stay strong in our areas of strength, and in our areas of weakness, striving just as hard to do better.