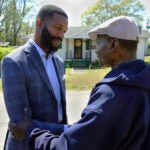 Two mayors talk pandemic, civic unrest, and the value of a network of peers

Created through collaboration of Harvard, Maryland, Michigan State and others

Vele was 16 when she embarked a slave ship in 1832 at Cameroons River in West Africa. Precillia Cozzens, 35, was registered as a slave in New Orleans in 1846. Domingos, age 6, was listed in an inventory of enslaved people at Aguiar Plantation, Brazil, in 1806.

The records of these three are among more than 750,000 of people, places, events, and sources available to search in a new open-source database called Enslaved: Peoples of the Historical Slave Trade (Enslaved.org), a repository of information and stories about those who were enslaved or enslavers, worked in the slave trade, or helped emancipate enslaved people. The entries run from the 15th century to the late 1800s and span Western Europe, Africa, and North and South America.

The site, which launched in December 2020, features research from scholars affiliated with the Hutchins Center for African & African American Research, the College of Arts and Humanities at the University of Maryland, the MATRIX Center for Digital Humanities & Social Sciences at Michigan State University, and other institutions.

On Enslaved.org, visitors can target searches through more than 5 million data points, including names, genders, birthplaces, places of death, and occupations of individuals, collected from existing research housed at institutions around the world.

“There are many projects at different institutions in the area of slavery studies, but we had a conundrum where much of the work was siloed, and if you were a researcher you couldn’t necessarily see all the information at once, so we tried to find a space that could link these different projects,” said Daryle Williams, one of the principal investigators on the project, an associate professor of history, and associate dean for faculty affairs in the College of Arts and Humanities at the University of Maryland.

The full biography volumes are normally restricted by a paywall, and the researchers worked with the Oxford African American Studies Center (housed at Oxford University Press) to make the adapted pieces available to read for free, said Steven J. Niven, executive editor of the African American National Biography, Dictionary of African Biography, and Dictionary of Caribbean and Afro-Latin American Biography at the Hutchins Center.

“For me, the most exciting thing is that it is a collaboration, and that we have all of these different organizations working together,” said Niven.

Some of the featured biography subjects hosted on Enslaved.org include Belinda Sutton, who successfully petitioned for reparations for enslavement in Massachusetts, Dâaga, who led a mutiny at the St. Joseph’s Barracks in Trinidad, and Joaquim d’Almeida, a freed African slave who later became a slave trader in Brazil.

“With Enslaved.org, we are using biographies that look at the complex lives of the enslaved, some free people of color, and also at people who profited from slavery in Europe, the Americas, and Africa,” said Niven. “We don’t just tell a U.S.-centric story, but a global one.”

One poignant example for Niven was the story of Mahommah Gardo Baquaqua, who was enslaved in Benin in 1845 and brought to Brazil. He served on a ship that brought him to New York City, where local abolitionists helped free him in 1847. He then lived as a free man in Haiti, upstate New York, Canada, and England, Niven explained, but, “Sadly we don’t know if he ever succeeded in returning to West Africa.”

This spring, the Hutchins Center and Enslaved.org researchers plan to make more biographies available to read for free on the website, focusing on entries from the Dictionary of Caribbean and Latin American Biography. The leaders of this project also plan to develop podcasts and videos to highlight stories found in the database and explain the archival processes in an effort to educate more people about the importance of digital humanities in historical research.

“Data science and the humanities are really not necessarily as far apart as you might think they are,” said Williams. “History often works at scale, telling individual stories and, for example, the story of the nation. Data science, statistical social history, and more modern forms of digital humanities tools can help us focus on the human level.”

He pointed to machine learning programs that pick up a person’s name in different datasets, indicating stages of a life, as well as advanced tools that disaggregate entries by certain keywords for easier viewing.

“The rows and columns on a spreadsheet may look fragmented, but they tell a story as a whole,” said Williams. “You might find a particular woman’s name in a birth record, then again in a slave inventory, and then in a marriage document. Data science helps you find the records, and you can try to construct a narrative of a whole life.”

Enslaved.org was funded in part by the Andrew W. Mellon Foundation and also includes the founding of a corresponding academic publication, the Journal of Slavery and Data Preservation.