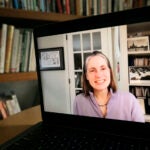 The Atlanta shootings that killed eight people, six of them Asian women, took place amid an upsurge in anti-Asian violence during the pandemic. Authorities say the suspect, a 21-year-old white man, has confessed to the attacks and blames a sex addiction for his actions. They have not yet charged him with hate crimes, and legal experts say such a case may be difficult to establish.

But for Courtney Sato, a postdoctoral fellow in The Charles Warren Center for Studies in American History, the general rise in hostility that serves as the tragedy’s backdrop is part of the nation’s long history of brutal bigotry against Asian Americans.

“The important thing to remember is that this is really not an exceptional moment by any means,” said Sato. “But it’s really part of a much longer genealogy of anti-Asian violence that reaches as far back as the 19th century.”

Sato pointed to the Chinese massacre of 1871, when a mob in Los Angeles’ Chinatown attacked and murdered 19 Chinese residents, including a 15-year-old boy, a reflection of the growing anti-Asian sentiment that came to its climax with the Chinese Exclusion Act of 1882. The act banned the immigration of Chinese laborers, much as the Page Exclusion Act of 1875, the nation’s first restrictive immigration law, had prohibited the entry of Chinese women.

Sato said the Page Exclusion Act is a precursor to the dehumanizing narratives and tropes that render Asian woman as objects of sexual fetishization and unworthy of being part of the national consciousness.

“In the 1875 Act, we see the ways in which race and gender are beginning to be entangled and codified in the law, and how Asian women were deemed to be bringing in sexual deviancy,” said Sato. “That far back, we can see how racism and sexism were being conflated.”

In modern American history, Asian Americans have been regularly scapegoated during periods of national duress. World War II saw the forced internment of about 120,000 Japanese Americans on the West Coast — an estimated 62 percent of whom were U.S. citizens — in the wake of the attack on Pearl Harbor. After the Vietnam War, refugees from Southeast Asia faced routine discrimination and hate, including attacks by Ku Klux Klan members on shrimpers in Texas. And in 1982, Vincent Chin, a Chinese American, was beaten to death by two Detroit autoworkers who thought he was Japanese. The killing took place during a recession that was partly blamed on the rise of the Japanese auto industry.

In a letter to the Harvard community, President Larry Bacow condemned the Atlanta shootings and stressed that the University stands against anti-Asian racism and all kinds of hate and bigotry.

“For the past year, Asians, Asian Americans, and Pacific Islanders have been blamed for the pandemic — slander born of xenophobia and ignorance,” wrote Bacow. “Harvard must stand as a bulwark against hatred and bigotry. We welcome and embrace individuals from every background because it makes us a better community, a stronger community. An attack on any group of us is an attack on all of us — and on everything we represent as an institution.

“To Asians, Asian Americans, and Pacific Islanders in our community: We stand together with you today and every day going forward,” Bacow wrote.

President Biden and Vice President Kamala Harris, whose mother is a South Asian immigrant, also condemned the attacks. “Racism is real in America, and it has always been,” said Harris before meeting with community leaders and the families of the victims in Atlanta. “Xenophobia is real in America and always has been. Sexism, too.”

Asian Americans have been physically attacked, verbally harassed, spat upon, and subjected to racial slurs. In February, an 84-yeard old Thai man died after he was shoved to the ground in Oakland, California’s Chinatown. Since the start of the pandemic, Asian Americans have become the target of xenophobic attacks, much like Muslims were blamed and scapegoated after the 9/11 attacks.

In a survey from the Pew Research Center, three in 10 Asian Americans reported having been subjected to racist slurs or jokes since the onset of the COVID-19 pandemic. A recent study found that former President Donald Trump’s description of COVID-19 as the “Chinese virus” led to a rise in anti-Asian hate online. Trump also used the racist term “Kung Flu” at a youth rally in Arizona.

Last March, Vivian Shaw, a College Fellow in the Department of Sociology, and Jason Beckfield, professor of sociology, launched the AAPI COVID-19 Project to examine the pandemic’s impact on the AAPI communities. UNESCO is now a partner in the research project. The project’s latest report, based on interviews conducted between June and October of 2020, found that Asian Americans are dealing with multiple forms of risk, including the threat of anti-Asian violence, in their daily lives. Some Asian American grocery-store owners reported being conflicted about forcing customers to wear face masks because they were afraid of violent reactions, despite their fear of exposure to the virus. The pandemic has also exacerbated social inequities as some Asian Americans — many of them immigrants — work in the underground economy, can’t access unemployment benefits, lack health insurance, and may be subjected to police harassment.

“This pandemic has affected the most vulnerable of the vulnerable,” said Shaw, the lead researcher for the project. “When we talk about anti-Asian racism, it’s not within a vacuum. It’s within the context of these broader structures: race, gender, immigration status, socio-economic condition. All of that impacts people.”

Beckfield said that while the project’s goal is to study the pandemic’s effects on the Asian American community at large, it also looks to elevate their voices and find recommendations to fight anti-Asian racism and all xenophobia.

On March 18, after the Atlanta killings, the Harvard-Radcliffe Asian American Association, along with other Harvard affinity groups, conducted a vigil and started a fundraiser to support Asian American advocacy groups in Boston and Atlanta, and two nationwide organizations.

Sun-Jung Yum ’23 and Racheal Lama ’23, co-presidents of the Harvard-Radcliffe Asian American Association, said the Atlanta killings have shaken the community, but that they have found strength in joining forces and working together.

“This pandemic has affected the most vulnerable of the vulnerable. When we talk about anti-Asian racism, it’s not within a vacuum.”
— Vivian Shaw

“It’s taking a toll on our Asian and Asian American peers in a way that people don’t realize,” said Lama. “But it’s amazing seeing how this younger generation is coming together and standing up for their parents and their older family members.”

Yum hopes that the Harvard community seizes the opportunity to continue the conversation about anti-Asian racism and not let it slip away. “It’s really important that not only do we donate now, but that we also keep on talking about this,” said Yum. “This is a great opportunity for us to not let it slide this time. I really hope that the Harvard community really continues to push advocacy and activism in this area.”

For Sato, the expert in Asian American Studies who is a postdoctoral fellow in the Charles Warren Center for Studies in American History, it’s a critical moment for Americans to learn about the history of anti-Asian violence in the country and realize how it’s connected to the mistreatment of other ethnic minorities.

“Once again, this is really not an exceptional case,” said Sato, “but it’s deeply linked to the broader conversation we have been having in the wake of the Black Lives Matter movement. This is a very much connected history, and we need to really think about how this violence is not only impacting the Asian American community, but also Blacks, Indigenous, Latinx and other vulnerable communities.”