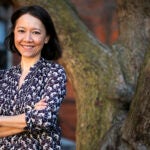 With vaccine manufacturing ramping up around the world, but most doses reserved by wealthy nations, global health experts are warning that ending the pandemic anywhere won’t be secure until the coronavirus is defeated everywhere.

Moreover, they say, as long as COVID-19 is still being transmitted — even in distant nations — it raises the chances of a mutation that can defy a vaccine.

The Gazette spoke with Rebecca Weintraub, assistant professor of global health and social medicine at Harvard Medical School, leader of the COVID-19 Vaccine Delivery response at the nonprofit Ariadne Labs, and a physician at Brigham and Women’s Hospital, about America’s vaccination progress in relation to other nations’, and about the potential benefits of restored economic activity and reduced risk from variants that global vaccination can bring.

GAZETTE: If you were to evaluate the U.S. vaccination drive, are we doing better, worse, or the same as other nations?

WEINTRAUB: In the U.S., the federal government is shipping the COVID-19 vaccines to the states and the states are responsible for getting the shots in the arms. But the public health departments have disparate and diverse delivery channels — many of which are not prepared to administer adult vaccinations. States have different requirements to be a vaccinator. That is because we have not invested in adult routine immunization, unlike pediatric routine immunization, where those pipelines are built. Vaccination sites are clustered into 64 immunization jurisdictions, including all states and territories and several cities. Other immunizing bodies in this campaign include commercial pharmacies; any mass, satellite, or temporary clinics that arise; and five federal agencies. State and local leaders face new bottlenecks to upgrade these systems during the pandemic: setting up protocols, data flows, incentives, communications, and workstream models to make the entire system run smoothly. The decentralized information system has curtailed our ability to understand where we need to send supply related to risk, and where we need additional vaccinators to serve.

GAZETTE: How are other countries doing with their rollouts?

WEINTRAUB:  The U.K. started funding vaccine research before COVID-19 even hit Europe. The U.K. government signed an agreement with Oxford in January 2020, which required that if the vaccine was approved, doses needed to first be made available to the U.K. When U.K.-based AstraZeneca partnered with Oxford, it inherited this agreement. In addition, the U.K. brought in biotech investors to invest in a COVID-19 vaccine portfolio. They chose both vaccines that had never worked and so were risky, and platforms that were older and more reliable. In December 2020, the U.K. used an emergency use authorization to approve the COVID-19 vaccines, almost three weeks before the European Union.

The EU was quite different. They were cautious in getting going and, through 2020, while the U.K. was placing these preorders, the EU was asking questions. They were worried about price, they were worried about liability. The EU has a high risk, older population, many EU countries had already had terrible COVID outbreaks, and they decided for political reasons that they wanted to buy as a bloc.

When the European Union gave conditional marketing approval to AstraZeneca, the company informed the EU it would not be meeting the volume of doses, because of production problems in the EU plant. Reporters investigated that the doses reserved for the European Union had gone to the U.K.

The early rollout in the U.K. was successful as the NHS legislated and trained allied health professionals and volunteers. In addition, theaters, stadiums and general practices have been converted into vaccination sites, everyone in England now lives within 10 miles of a vaccination center. And in January, the U.K. decided to prioritize the first dose of a vaccine, with a second dose up to 12 weeks later.

And, while the U.K. and the U.S. were securing doses for their nations, countries also signed on to participate with Covax (COVID-19 Vaccines Global Access) which was designed to promote global cooperation, counteract vaccine nationalism, and become a global procurement facility.

GAZETTE: How has Covax been doing, and what obligation do we have to ensure that the rest of the globe is also vaccinated?

WEINTRAUB: Most of the Pfizer and Moderna doses within current manufacturing capabilities in 2021 are already reserved. Australia, Canada, Japan, the U.S., and several countries in the EU have procured beyond their needs, so the market is constrained by these bilateral agreements.

What we know from our epidemiologists is that we need around 70 percent of the world’s population to be immune to coronavirus, either through vaccination or infection and recovery, to end the pandemic. So, if we were to distribute the vaccine based on epidemiology, ethics, and empathy, we would redistribute the vaccine supply differently than we are today. Economists remind us that investing in vaccine manufacturing has a very high ROI right now. And, while limited at the moment, we are seeing horizontal cooperation, for example Novartis is now leveraging its manufacturing capacity and capabilities by supporting the production of the Pfizer-BioNTech COVID-19 vaccine. So, if we thought of this purely as an economic argument, the modelers have showed that if wealthy countries invested $25 billion to procure additional supply, the benefit-to-cost ratio would be almost five to one because of the disruption to the global economy.

But we’re in a moment of vaccine nationalism. We’ve not had the global cooperation to ensure that Covax, for example, could lead the way, as bilateral agreements have constrained global supply. The vaccines are absolutely crucial and an incredible act of science, but their discovery is not the endpoint. So, while the vaccine discovery points the way out of this pandemic, it’s the global delivery that will get us there.

GAZETTE: What is Covax seeking to do?

WEINTRAUB: When Covax was set up, it declared that every country that participated in its global procurement would receive vaccination for 20 percent of its population and, until that happened, countries would not receive additional doses. It was population-based and the idea was that 20 percent would cover the most vulnerable population and the healthcare workforce. But right now, Covax does not have all the pledges it needs. It’s still looking for another $6 billion. Most countries have not received supplies to cover 20 percent of their populations, and many of these countries also need investments to upgrade their immunization system to distribute the COVID-19 vaccines.

GAZETTE: Have we reserved enough doses for all Americans, and to give away to other countries?

WEINTRAUB: The thing to remember is that the vaccine portfolio is now quite diverse and that manufacturing capabilities are being ramped up. But they are being affected by disruptions in the supply chain. Today, AstraZeneca said its supply chain was being disrupted and they would not be able to make all their orders. So we’re going to see these disruptions because we’re manufacturing a vaccine in the midst of a pandemic at massive scale. Many countries are going through their own approval processes and so certain countries, for example the U.S., may have a preference for the mRNA vaccines and the Johnson & Johnson vaccine, even though they also procured AstraZeneca. So the portfolio is going to look different in each country. But the big highlight here is that in the past year, there have been about 140 different agreements between countries and drug makers outside of Covax. The management teams of these companies are signing individual agreements at different prices, different liability, and with different shipping schedules. What it means is that 9.6 billion doses have already been reserved and that would be enough, if it’s a two-dose vaccine, to cover more than half the world population. For example, Canada hasn’t received it yet, but they ordered 330 million doses, enough to vaccinate their population five times over.

GAZETTE: Has Canada spoken about what it’s going to do, should all those doses come in, with the surplus?

WEINTRAUB: That’s a question many countries are facing: Canada, the U.K., Australia, they’re all being asked this question. No one’s giving a clear response when surplus doses will be donated. During the H1N1 pandemic, Australia and the Canada donated their extra doses. And France’s President [Emmanuel] Macron suggested that all countries should be donating 5 percent of their vaccine supplies to low-income nations. Israel has reportedly begun sending its excess stock to Honduras and Guatemala. Portugal has committed to sending 5 percent of its COVID-19 vaccines to Portuguese-speaking African countries, Angola and Mozambique. Of course, these are just statements and we haven’t seen the vaccine actually move yet. At the same time, in parallel, China has its Belt and Road Initiative and are exporting doses of their vaccine. They donated 10 million doses to Covax, for example, and they’re offering their vaccine to countries that are interested.

GAZETTE: Is Russia doing the same thing? Those are the main vaccines, the Western ones we know about and Russia and China?

WEINTRAUB: Russia is engaging in vaccine diplomacy throughout Africa. They are not participating in Covax.

It’s also important to mention the dynamic nature of this moment. There’s a pandemic and we didn’t prepare for the supplies we were going to need or anticipate which would be scarce. So additional bottlenecks have developed. For example, the global syringe market is normally about 20 billion units a year. But if we have to dose half the world’s population — twice — that’s another 8 billion syringes that we don’t have. And if we use a specific type of syringe, a low-dead-space syringe can extract an additional dose per vial of the Pfizer and Madonna vaccines. And other products, the alcohol prep pads, the vials themselves, you have to remember that it’s not only the dose, it’s all the ancillary materials as well.

GAZETTE: To what extent is making sure other countries are adequately vaccinated an act of self-defense, when we talk about variants?

WEINTRAUB: Variants happen when we’re having significant transmission of the virus. One of the best ways to prevent variants is to decrease transmission. And what we know about epidemics and pandemics is that if we reduce transmission, we prevent the new variants from appearing anywhere. We’re safer globally.

GAZETTE: So, given that the evidence seems to be mounting that this virus is fairly seasonal, should we as a nation — assuming the U.S. is in halfway decent shape by August, September — be saying, “Let’s do a global push and try to beat the next cold season”? 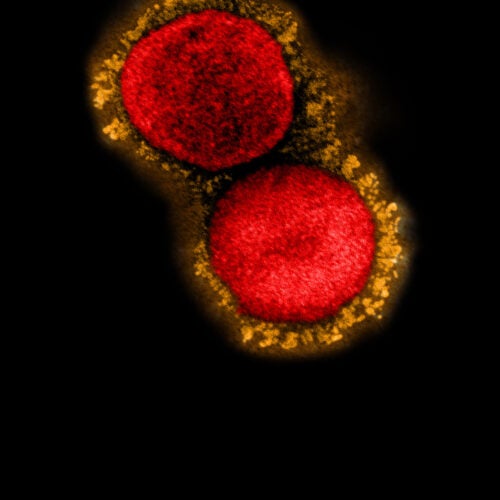 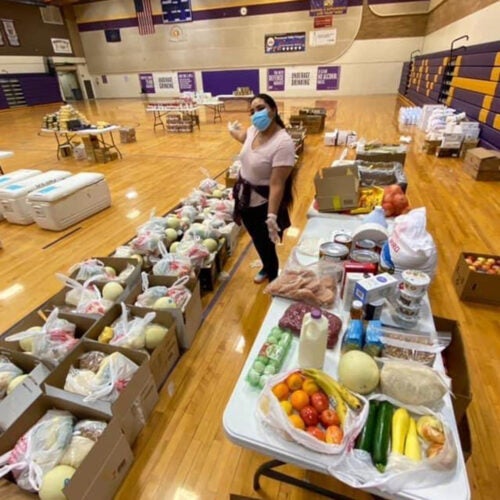 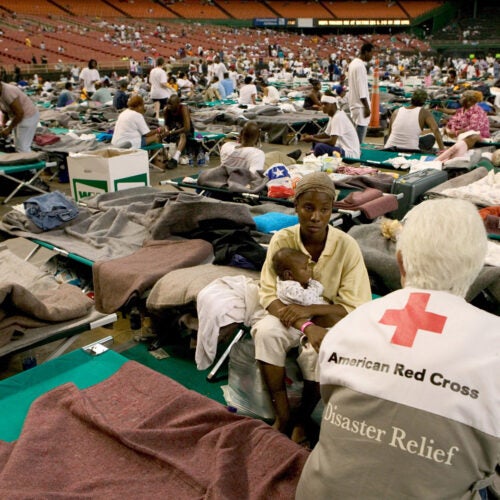 WEINTRAUB: I think right now, every dollar spent on global manufacturing of the COVID-19 vaccines is going to have global benefit. The sooner we vaccinate and protect the population, the less transmission, the fewer variants, the less need for a booster. And you’re seeing that in the form of horizontal cooperation in the pharma industry to increase vaccines, and the manufacturing organizations working to decrease the bottleneck on the supply side.

We are still in the midst of a pandemic. Cases plateauing does not mean the pandemic is over. The virus is still circulating in the community and its ability to replicate leads to dangerous mutations and variants. Vaccination is essential to curtail the pandemic, curb global transmission. And I hope that the intersection of our empathy for others, our ethics, the epidemiology, and the economics of the pandemic will compel us to have a leadership moment here, under this administration, to further global distribution of the vaccine.