Is this a tipping point for Putin? 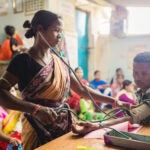 Amid pandemic tragedy, an opportunity for change?

Protests have rocked Russia in recent weeks, sparked by the Kremlin’s prosecution of its most effective critic, dissident Alexei Navalny. On Feb. 2, a Moscow court sentenced Navalny to more than two years in a penal colony for allegedly violating probation on a 2014 embezzlement conviction that Europe’s top human-rights court ruled was politically motivated. On Friday, Navalny faced a new criminal trial on charges of slandering a World War II veteran who appeared in a pro-Putin video last year. Navalny was arrested Jan. 17 at the airport in Moscow after spending five months in Germany recuperating after Russian intelligence officials attempted to assassinate him with poison, according to reporting by Russian investigative journalism outlets, Bellingcat, and CNN.

The Gazette spoke with Alexandra M. Vacroux, executive director of the Davis Center for Russian and Eurasian Studies and lecturer on government at Harvard, about Navalny’s future, the protests, and what they could spell for Putin’s rule.

VACROUX:  It’s mostly a reaction to the video that Navalny put out called “Putin’s Palace.” That seems to have really brought together different people who have problems with Putin’s regime in a new way. Before, you’d have Navalny supporters come out for Navalny events, but that’s far from everybody. Not everybody supports him for different reasons. And what we see now, at least according to interviews with people who are in these protests, you have people who don’t particularly support Navalny, but who are just disgusted with the level of corruption and think that it has to stop. You really see a broadening of the protests; at the same time, you see a very active crackdown. The police are not shooting people, but they are dragging them off the streets, beating them with batons, closing down metro stations in the middle of Moscow to keep the protests from consolidating in any one place. So they’re taking it very seriously.

GAZETTE:  The video has over 100 million views on YouTube, but how many Russians have actually been able to see it and why has it galvanized so many people?

VACROUX: At the beginning of last week, the Navalny people were saying that 70 percent of those views were from inside of Russia. That’s obviously not unique viewers, but that’s a lot of people, and it’s a lot more than the 25 million or so who have watched some of his other exposés. This one has gotten a lot more traction than the previous videos, and it’s the first time that Putin has been so directly implicated in corruption. Navalny went after [former Prime Minister Dmitri] Medvedev and that made a lot of noise, but this is on a totally different order of magnitude. It was that there was proof; they were able to lay out the different holding companies and the different shell companies and tie them back to all of these obscure Putin family members and relatives. Everyone suspected that that was true, but there was no real proof of it because nothing is in Putin’s name. And [this video] was just so methodical in laying out how things have been structured. And then, the Kremlin reaction has been ludicrous, as well. The press secretary came out and said, “Of course that’s not Putin’s palace.” That didn’t work. Then Putin came out and said, “That’s not my palace, obviously.” And that didn’t really work. And then, they wheeled out [Arkady] Rotenberg, who is one of Putin’s childhood friends who’s become an ultra-billionaire and was like, “Oh, that’s my palace.” And nobody believes that either. So the usual tricks that they’ve used to quiet down the muttering haven’t worked this time. People just aren’t buying it.

GAZETTE:  How is Navalny’s prosecution viewed by ordinary Russians?

VACROUX: I don’t think anyone thinks it’s legitimate. Even people who thinks it’s a good way to get rid of him don’t think it’s legitimate. [French firm] Yves Rocher has come out and said, “We don’t think they took anything from us.” They said that a long time ago. The accusation is that he didn’t check in; he just vanished when he was in Germany after he was discharged from the hospital. There are documents that show he sent a note to the probation officer. They knew where he was, but he’s accused of not telling them where he was.

GAZETTE:   In his courtroom speech, Navalny said his prosecution was not a show of the Kremlin’s strength but a sign of its weakness designed only to intimidate the public. Is he right?

VACROUX: He’s right in the sense that it shows you that the law is completely arbitrarily applied. If the Kremlin wants to get rid of you, they’ll get rid of you regardless of whether you’ve done something wrong or not. It’s easy enough to cook up some charges and throw you in jail. This isn’t news to anybody. But this is just a very noisy example of that.

GAZETTE:  Will his imprisonment cool the protests, as Putin intends, or will it ratchet them up, as Navalny believes?

VACROUX: I think eventually the protests are going to die down. They’re going to be crushed with force in the same way that we saw in Belarus. But, in a way, that’s not the point. The point is that these people did come out. They did know that it was very dangerous. You have people getting arrested who were never arrested before, like university professors and journalists who deliberately left their credentials at home because they’re there as private citizens. Especially in winter, it’s very difficult to keep this level of protest up and it’s very difficult for nonviolent protest to be successful. It’s not what topples regimes. And so far, it looks like the Putin regime is basically willing to do anything except shoot. Eventually, they’ll get the upper hand. The thing that’s really important is how the elite is going to react to what has happened. First, to the fact that however [they] have managed to hide [their] assets, eventually someone is going to figure it out. It’s never completely hidden, and it could be made public, and it’s not safe. Second, is Putin going to lose legitimacy to the point where he can’t hold the system together? And if that’s true, it’s time to find a new patron quickly. What we see in these authoritarian regimes is that the whole thing hangs together until it falls apart, and then it suddenly falls apart, and then they’re rats jumping off the sinking ship. So it looks like it’s very solid, and indeed there’s little sign of defection, but that’s what brings it down in the end. It’s not necessarily street protests.

GAZETTE:  What would it take to oust Putin?

VACROUX:  It would have to take a split in the elites. That’s the only way to set off infighting that eventually removes him. And someone else becomes better able to provide the goodies that the elite have become accustomed to.

GAZETTE:  Where is he weakest?

VACROUX: The fundamental problem with authoritarians is that they don’t really have popular support. They’ll say, “Of course he’s popular. He keeps winning re-election.” But you have no idea how popular he is because you don’t have free media, and you don’t have free elections. The fact that he wins elections doesn’t tell you anything about how popular he is. People have no incentive to tell you what they really think. There are elections that he probably would have won. The fact that they still manipulate the results, mostly through ballot stuffing, decreases your credibility and your legitimacy rather than increasing it. That works for a while, and then all of a sudden it stops working.

GAZETTE:  What could the Biden administration do that would most help Navalny and the cause of anti-corruption?

VACROUX: It’s really hard. There’s a kind of sanction fatigue. The thing about sanctions is you have to continually tighten them because you set a sanction and then people find a workaround, and then in order to keep the same level of pressure, you have to tighten it. You have these sanctions. Some of them are being tightened; some of them are not, which means they’re being loosened. But they don’t provide any leverage because Russians don’t actually think they’ll actually be lifted. That’s true with the sanctions that were imposed after Crimea, so it becomes less useful as a threat.

GAZETTE:  Why hasn’t the international community done more to punish Putin given all of the human-rights violations he engages in, both at home and abroad; his repeated violations of international treaties and laws; and his relentless efforts to harm other governments through espionage, military and malign cyber actions? 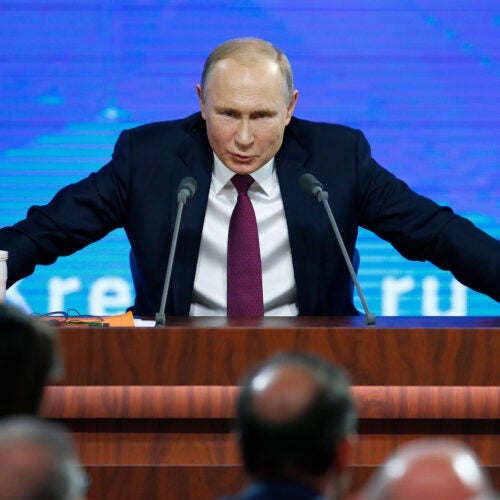 The rise of Vladimir Putin

Russia analysts look at success, failures, and fears over a two-decade reign 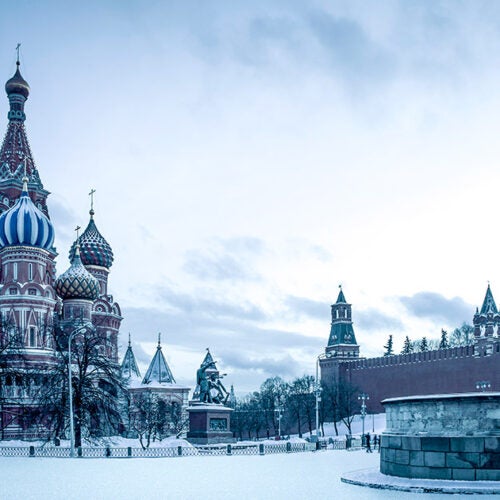 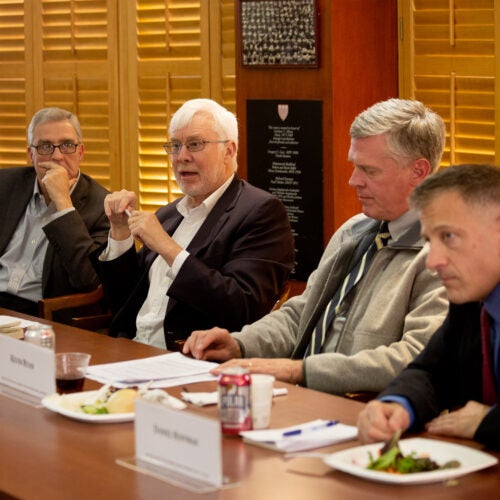 VACROUX: A couple reasons that doesn’t happen. One is they’ve got a lot of nuclear weapons, so like it or don’t like it, we have to negotiate with Russia. It’s in our interest to control nuclear weapons with Russia. One of the first things the Biden administration wanted was to get that extension of the new START treaty filed. Also, there’s a lot of economic ties between Russia and Europe. There’s a lot of gas that’s heating European homes in winter; they need it. I think those economic ties are pretty extensive … and provide a certain amount of leverage over the Europeans. That dependence is why we keep talking to Russia and keep treating them as a more or less “normal country.” The other thing we have to consider now is they’ve got this vaccine, which they are providing to countries that can’t get their hands on the Pfizer or Moderna vaccines. Even if we don’t believe that it’s 90 percent [effective], even if we think it’s 70 percent, the fact is that those Latin American countries that are trying to get agreements to produce it, they’ve got no alternatives. A 50 percent vaccine is better than nothing. And they’re not going to be able to outbid the rich countries to get the vaccines that are 94 percent effective. So for them, signing a production agreement, which is what Russia is going to do so they can produce the vaccine themselves, is a huge benefit. That’s enough to make you keep talking to Russia if you think they’re the only ones who are going to supply you with a viable way of vaccinating your population sometime this year. It’s like the people who are getting investment from China to get infrastructure built — it might not have been your first choice, but it’s your only choice.

GAZETTE:  What will you be watching for in the coming weeks?

VACROUX: Russia is going to be holding [parliamentary] elections [in September] so it will be interesting to see if there’s some kind of mobilization of political forces in preparation for that. Navalny and his group showed themselves as the only people who were able to do a nationwide campaign. They’ve now got people who work with them across the country. Do the street protests continue and do they build up? That will be interesting because usually these things taper off, particularly if the authorities get violent or if they arrest enough people where everyone knows someone who’s been arrested. That would be a new threshold of open dissent that we haven’t seen before. And the third thing is just watching what happens among the elites. So far, business has been very silent about what’s been happening. They know they might not like what’s going on, and they’ll say that in private, but their business and their well-being depends on the situation stabilizing and continuing. If you start seeing businesspeople coming out to protest and say, “Enough is enough,” that could be the beginning of the tipping point.