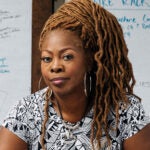 An America hopelessly polarized. Two political parties that can find no common ground. Income inequality runs rampant as the gap between rich and poor widens. Ordinary working people are increasingly convinced the system is rigged.

It may sound familiar, but it’s actually a description of the state of the union more than 100 years ago, say Kennedy School Professor emeritus Robert Putnam and Shaylyn Romney Garrett, authors of “The Upswing: How America Came Together a Century Ago and How We Can Do It Again.” During a Kennedy School event Tuesday evening, the two underlined the parallels with the present day and why lessons from that time offer hope for the future.

The talk — “Rebuilding Community: How Does America Once Again Go from ‘I’ to ‘We’?” — was moderated by Jonathan Capehart, Washington Post editorial board member and MSNBC host. He began by asking the authors to clarify the central thesis of their book: that the country started evolving in the early decades of the 20th century from an individually-oriented “I” society to a more inclusive “we” society before swinging back again after the Reagan years.

Garrett concurred with Mark Twain, who disparagingly referred to the early 1900s as the “gilded age” — a term he coined in his namesake satire of the venality and corruption of “Robber Baron” America. “There was unprecedented prosperity, unprecedented educational opportunity, and personal freedom,” she said. “Those were some of the positives.”

Yet there was also great social and economic inequality, corporate monopolies exploiting workers, air and waterways polluted by industrial waste, dangerous products and medications foisted on an unsuspecting public, a “zero-sum” political struggle between the two parties, and a general malaise in the American psyche. “In culture we had an extreme self-reliance,” Garrett said. “We had crime and moral decay, widespread drug and alcohol use, extreme consumerism and materialism, and nostalgia for an earlier era. The feeling was that America had gone off the rails.”

The pivot toward a “we” society was gradual, Putnam said, and was both political and economic. “Between 1910 and 1970, the gap between rich and poor was narrowing. In the sphere of politics the same thing is true: Americans gradually become more cooperative and more tolerant across party lines … Most of the New Deal was supported by a majority of Republicans, and most of Reagan’s revolution was supported by Democrats.”

Likewise, he said, individuals became less isolated. It took a handful of factors — political assassinations, Vietnam, the oil crisis, and the sexual revolution — to start moving post-’60s America back to an “I” culture.

Capehart wondered, however, whether this American ‘we” culture was necessarily open to Black Americans. While Garrett concurred that racism and segregation were obstacles, she pointed out that significant advances happened in the pre-Civil Rights era. “When you look at things like life expectancy, infant mortality rate, home ownership, political participation, voter registration —you actually see a slow but unmistakable progress toward parity between Black and white Americans” she said. “Granted that it was too slow and didn’t come near to full equality. But much of this progress happened in the first two-thirds of the century.”

Sadly, Garrett said, the enactment of Civil Rights laws prompted a white backlash that helped bring down the “we” era. “The upswing had built into it the seeds of its own demise. … The minute those laws were in place, white Americans started saying, ‘I agree with this on principle, but not in my backyard.’”

She finds hope that today’s Black Lives Matter movement will do the underlying work toward racial reconciliation that wasn’t done before. “We think we can do the work with policies and programs, but we never stopped to say, ‘When are we going to come into community with one another?’”

Putnam was especially optimistic that today’s young people can do the hard work that previous generations didn’t always manage, naming environmentalist Greta Thunberg and the gun control activists who survived the attack at Marjory Stoneman Douglas High School in Parkland, Fla.. “The most important thing to recognize is that it’s up to you. And I’m talking to my grandchildren: You didn’t cause this; you’re the victims of all this. But don’t get cynical because people like you, facing these exact same problems 125 years ago, with the same constraints, got together and turned the country around,” he said.

Garrett added that 2020 can be seen as a crisis year, and that flashpoints like the Black Lives Matter protests after the unjust police killing of George Floyd and other Black Americans point a way forward. “When people are looking at 2020 and saying, ‘When can we just go back to normal?’— those are the people pulling in the wrong direction. But the people saying ‘This is an opportunity we were given to question things that weren’t working, to bring things to the surface that we weren’t willing to talk about before’ — that’s what’s going to push us toward the upswing.”