Being in the Super Bowl — and with your football heroes 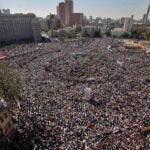 10 years later: Was the Arab Spring a failure?

Harvard grad suits up alongside Tom Brady and Rob Gronkowski

It’s not often you get to meet your sports heroes, let alone play with them in the biggest game in football.

But in three days, Cameron Brate will do exactly that during Super Bowl LV. It’s a dream come true for the Harvard alumnus, made even more special by the fact that owing to a bit of chance the Tampa Bay Buccaneer will be on his home turf against the Kansas City Chiefs — the first time a team has played on its home field during the big game.

“I always really looked up to Tom and Rob,” said Brate ’14, a tight end for the Bucs who spent four years in the same position for the Crimson. “And I never thought I would have a chance to play with either of them.”

Brate, of course, is referring to Tom Brady and Rob Gronkowski, the former New England Patriots standouts, Super Bowl champions (six for Brady and three for Gronk), and current Bucs teammates. Brady left New England for the Florida franchise as a free agent in 2020, inking a two-year deal worth $50 million. Gronkowski, a tight end known lovingly in New England simply as “Gronk,” came out of retirement to reunite with his former captain soon after.

Already Brate and Brady have developed a successful partnership, connecting for 28 completions during regular and post-season play, including the game-winning touchdown pass during the NFC championship game against the Green Bay Packers. And Brate said he’s “learned a lot” from Gronkowski just by seeing his fellow tight end in action up close. “Just being able to watch him, the way he prepares, the way he works, it’s been great,” said Brate.

Brate admired both men while in College, following the Patriots’ four division, two conference, and one Super Bowl championship during his Harvard time. He replaced the Gronkowski jersey he used to wear with an official shirt signed by the man himself, and he made sure to hang onto the ball Brady threw him for the go-ahead touchdown during the recent NFC championship game. He calls his new teammates “unbelievable players,” who have had a tremendous impact on the team and “the whole culture within our organization.”

In the beginning, Brate said he was a little intimidated. When he got a text from the famous quarterback asking him to get in touch, Brate checked around to make sure it wasn’t a joke. The text was legit, and Brady was all business, telling Brate over FaceTime his goal was to “win the Super Bowl.” A week later, Brate was preparing to play catch with Brady for the first time, and he was nervous. “I was just going to catch passes,” said Brate, “something I’ve done a million times, no one on defense, and I didn’t sleep well the night before.” But Brady’s ability to “put the ball in a good spot” meant the session “went really well,” he recalled.

“It will be pretty cool one day to tell my kids I was able to catch passes from Tom Brady and play alongside Gronk,” said Brate.

One day, they might be saying the same about him.

As a teen in Naperville, Ill., Brate played basketball and baseball, but he was better at football, growing into it, literally. His freshman year in high school he was 5’10” and weighed 140 pounds. By his sophomore year he had gained six inches and was tipping the scales at 200. As he excelled on the field, his coaches encouraged him to think about playing in college and consider the offers he’d received from small Division 1 schools. Then Harvard came calling.

For his parents, both teachers, there was only one option. “I think they would have disowned me if I had the chance to go to Harvard” and went somewhere else, said Brate. “They definitely pushed me in the right direction.” But it only took him one visit to campus to make up his mind. “What really sold me, obviously outside of everything that Harvard can do for you, was just the guys on the football team, just how impressive they were as people. I thought, ‘Wow, if I could end up like these dudes, I wouldn’t be in a bad spot.’”

He credits Harvard’s Tim Murphy, Thomas Stephenson Family Head Coach for Harvard Football, with helping him grow as a player and a person during his time in Cambridge. An emphasis on hard work, time management, and strength of character are the hallmarks of Murphy’s approach to coaching, said Brate, as is brutal honesty. Murphy, who also leads the tight end squad, doesn’t hold back when displeased. “As a freshman it was pretty terrible because every time you messed up [at tight end] the head coach was on you about it,” Brate recalled. But the tough love, and Murphy’s insistence that his team know the game inside and out, only made him better. “He helped me so much as a player … I was just able to learn so much from him.”

Brate is humble when thinking back on his Harvard highlight reel. He cites a home game against Brown his sophomore year in the rain, under the lights. His dad was in the stands, and Brate remembers he played well. Murphy remembers that game too, in particular a tricky third down catch. “He had to reach behind him to catch this ball, at the same time the Browns safety made a tremendous play, it was an extremely physical hit,” recalled Murphy. “Cameron hits the turf, bounces up, hands the ball to the official, and signals first down. I turned to one of my assistants and said, ‘Wow, what the heck do we have here?’”

Another standout moment for Brate came a year later, again at Harvard’s stadium. In this one Brate credits former Crimson quarterback Colton Chapple for delivering a perfect setup. “He threw a great pass, right over a guy, and I was able to go up and get it.” The end-zone catch also just happened to be the game winner in that year’s Harvard-Yale showdown.

Murphy said Brate’s unassuming personality stood out to him early on. “He was a very humble, kind of laid-back kid, confident in his own shoes, just a great kid,” said Murphy. “And it’s 100 percent authentic.”

And his talent was undeniable. Brate finished his Harvard career as one of the all-time leading receivers in Harvard history. As he has done with other standouts on the Harvard team, Murphy sat Brate down midway through his College career to talk about the NFL. Inspired by his coach’s encouragement, and the encouragement of his friend and former Crimson teammate Kyle Juszczyk ’13, a fullback for the San Francisco 49ers, Brate decided to go for it. “I kind of went all in on football. And if it didn’t work out, it didn’t work out,” he said. “I wasn’t going to have any regrets.”

Getting into the NFL wasn’t easy. He was passed over in the 2014 draft, but had expected as much, hoping instead to later sign with a team and prove himself in training camp. But the calls never came. Eventually he got a trial with the Minnesota Vikings, but they didn’t have a spot for him, so he hopped on a plane to Tampa for a brief workout consisting of 10 routes. The coaches were impressed and signed him. Brate played a couple of games his rookie season but was eventually cut from the squad. His second year, he headed to New Orleans, only to have Tampa call him back a week later. He’s been there ever since.

Brate defines himself as more of a “pass receiving” tight end, but he blocks, too, and he credits early NFL coaches and veterans for helping him learn how to stop someone “much bigger.” At 6’5” and 236 pounds, Brate is big, but the onrushing linemen he said are “huge.” What’s the best piece of blocking advice he’s ever received? “It doesn’t always have to be pretty.”

The rough nature of the game seems at odds with Brate’s off-field demeanor. On the phone last Sunday afternoon from his home in Tampa, what sounded like tropical birds chirping in the background turned out to be Brate’s dog Archie, a mini golden doodle. The offensive lineman and receiver was hosting a doggie playdate with his friend’s dog Gigi, a shiba inu, and the two pups were tussling with a particularly squeaky plastic red ball.

Brate’s even temper will no doubt help him handle whatever happens on Sunday. Win or lose, Brate said he is looking forward to having his family at the game and is excited that he and his fiancée, Brooke Skelley, a member of the Super Bowl’s host committee, will be able to share in the day’s excitement. “It’s kind of like the pinnacle moment of our careers are both coming together and lining up on Sunday night,” said Brate. “And hopefully we can get the win and celebrate afterwards.”

As for life after he hangs up his cleats, Brate, who describes himself as “more of a math guy than a writing guy,” has a plan. He got hooked on economics at Harvard and has been taking classes toward his M.B.A. “That’s definitely something that I envision myself doing during my career, and hopefully finishing up when I’m done playing.” Asked whether Harvard might be in his plans for graduate school, Brate answers like someone who has wintered in both Massachusetts and in Florida.

“I haven’t given it a ton of thought. There are a couple places I think weatherwise that I would find more enjoyable,” he laughed, “but we will see.”