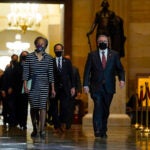 They all had to deal with navigating a kind of hybrid identity while at Harvard: of being Black, being a student, and being an athlete. Some were on teams where they were the only African American; others had Black teammates or coaches, which made some things easier and others different, sometimes richer.

But all felt their experiences helped shaped their views of race in America and in sport, and the members of an all-star panel of former University athletes came together in a Black Varsity Association Zoom event on Friday to discuss the impact of race on the college and professional sports worlds.

The panelists included Koma Gandy Fischbein ’95, who played varsity women’s soccer at Harvard and rugby at Radcliffe, rose to the rank of lieutenant commander in the U.S. Navy, and now works in educational technology. James Blake ’00 was an All-American tennis player during his two years at Harvard who went on to become a top-ranked player on the ATP circuit. Chris Egi ’18 played men’s basketball at Harvard and is now an investor at Goldman Sachs, working with the firm’s $500 million program to invest in women and minorities. Gabby Thomas ’19 is a professional track and field athlete, who broke the NCAA indoor 200-meter record while at Harvard. Moderating the panel was LZ Granderson, Los Angeles Times sports columnist and ESPN radio host.

Before getting into sports and Harvard, Granderson broached the larger topic of how attitudes have changed since the police killings of George Floyd and Breonna Taylor last year, and what sort of cultural shifts the panelists have witnessed.

Egi found cause for optimism, citing work with his own anti-racist nonprofit No More Names organization. “I would say the willingness to have a dialogue has emerged,” he said. “In the aftermath of the events of the summer, where we lost many beautiful Black souls, I thought we saw some positive momentum. It’s almost like peoples’ eyes were opened for the first time, when we’ve been shouting this for years upon years. … What I don’t think has happened yet is a permanent shift. We had a summer where everyone was making statements, and I hope we the people can continue to do the work even when it’s not the top headline.”

Blake referred to an encounter of his own, when he was thrown to the ground and handcuffed by New York police in a case of mistaken identity in 2015. “I was shouting about it for years, and Colin Kaepernick was kneeling about it,” he said. “The difference when this happened to George Floyd was that it was so graphic, so brutal to be watching this murder take place in such a nonchalant manner. My incident awakened the people who were in my circle, but I feel that [Floyd’s killing] opened the eyes of America, especially white America. Now it isn’t just the Black community screaming about this issue. But I agree that it’s losing steam, and I don’t know if everyone is committed to doing the work of holding police accountable.”

Fischbein suggested that the tougher conversations are more likely to happen at Harvard now than when she was an undergraduate. “It’s been a long time since I’ve been on campus,” she said. “But having remained involved with the Harvard athletic community has facilitated conversations that I’ve never had, where we’re actually talking about what it’s like to be part of a community of color on a campus, what it’s like to be an athlete of color, and what that means for the overall health and well-being of that athlete and their contributions to their team. Those topics that might have been discussed on the back of the bus on the way to a game, or perhaps at an alumni event, are now part of the conversation about what it means to be an athlete at Harvard.”

Granderson asked whether the panelists had felt pressure to be what he called the “super negro.”

“The job of the super negro is to come into a predominantly white environment and make them less racist, give them shelter from being racist, and whenever they fall short, particularly when it comes to athletics, to be the savior.

“Did you feel any added burden to be some sort of cover or whisperer for race relations?” he asked.

“I haven’t heard it put that way before, but you do feel there’s extra pressure,” Blake said. There were times when he was around others “who hadn’t been around Black people very often, who lived a country club sort of lifestyle, around white people their whole lives, and so they’re asking questions that should’ve been asked 10 years earlier,” he said.

“So you do feel like you have to give them a sense of their privilege and what they’ve lived and that it may not be normal for other communities.”

As an example, he said that they might find articles in their lockers about Colin Kaepernick when he first took a knee. “And we sat down after practice,” he said, “and we discussed the article.” Being in a situation where he could discuss issues as they arose, with a coach who viewed it as an imperative, “was one of the most important parts of my Harvard experience.”

Thomas said that for herself, having peer support made a world of difference; and she particularly credited her sprints coach, Kebba Tolbert.

“One of the reasons I ended up choosing to run at Harvard was because of the Black student athlete community that I had found when visiting,” she said. “When I joined the track team, my coach was pretty new to Harvard, and he was a Black man. He had turned the sprints program around; he recruited me and a group of really accomplished, dedicated Black women. These women were amazing role models, and I felt so comfortable going to practice every day, knowing that I didn’t have anything to prove. I didn’t have to teach them anything about being a Black student athlete and having to navigate this hybrid identity of being a student and an athlete. We were all sharing that same experience and I got to look to them for guidance.”

In the end, Blake said that while he did feel extra pressure, “I always enjoyed it when I got through … and I’ll give credit to [tennis great and longtime gender-equality advocate] Billie Jean King, who said the pressure is a privilege. You have the pressure of doing this but then when you get through it, when you feel like you did something you succeeded in, be it in athletics or in educating, you feel like you accomplished something.”